‘I felt like an outcast’: Woman, 29, who refused an arranged marriage reveals how she’s found happiness in the WRESTLING ring – where she delights in ‘taking on 6ft men’

A woman who felt like an ‘outcast’ after falling out with her family when she refused an arranged marriage has found acceptance in the wrestling ring – and now spars with 6ft men.

Marketing executive-turned delivery driver Charlene Blugher, 29, from Worcester, refused to have an arranged marriage when she was 18 years old.

Left feeling like an ‘outcast and an outsider’ after falling out with her family, she came out as lesbian three years later, aged 21, and decided to try and achieve her childhood dreams of becoming a wrestler. 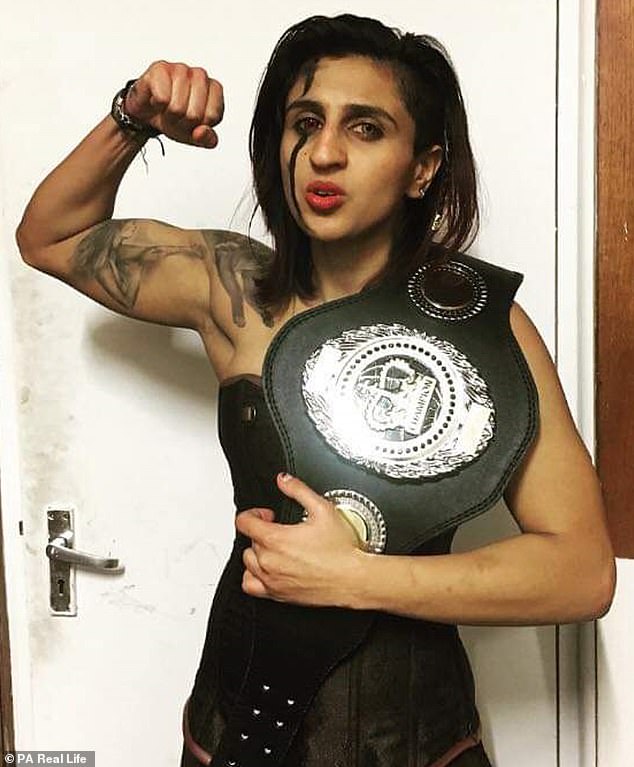 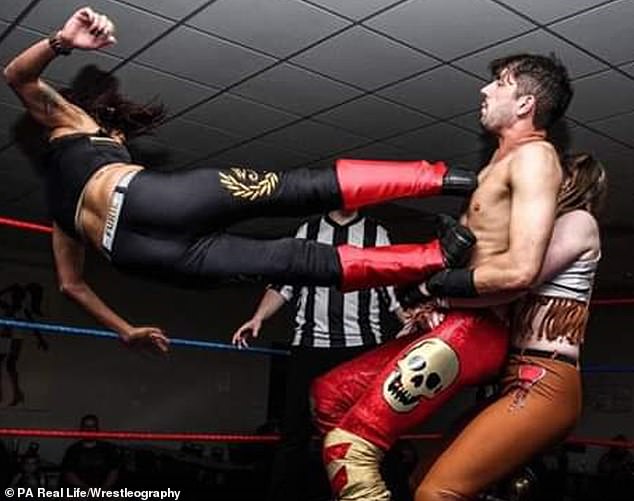 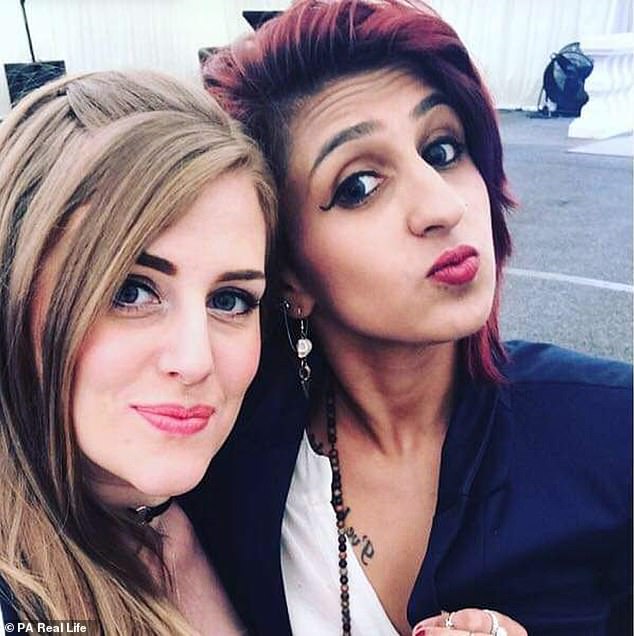 The wrestler came out as lesbian when she was 21 years old and soon met her partner Kelly. The pair are now happily engaged and in the process of planning their wedding

‘As a youngster, I became absorbed in the story lines that they’d build around the fights and with characters like the Rock, who seemed to just have so much charisma,’ said Charlene, who has always loved the theatrical side of wrestling, where competitors act out the story line.

But it was watching female wrestler Chyna performing on WWF that finally inspired her to become a wrestler herself.

‘From that moment on, being a wrestler was all I wanted from life,’ she said. ‘I remember when I was 11, telling the boys at school that one day it’d be me they’d see on telly wrestling.’

Sadly, though, her parents – strict Sikhs, who were both originally from India, did not approve of her wrestling, deeming it not ‘appropriate for a girl.’

Fortunately, they did not feel the same way about football, which she was so good at, she turned semi-professional aged 17, playing for West Bromwich Albion Women’s 1st XI.

‘The boys at school didn’t want to play football with me because they were worried that they might get shown up by a girl,’ said Charlene, who was forced to quit her footballing career after tearing her Achilles tendon, aged 18. ‘My footballing success meant that, from a pretty young age, I was convinced I could hold my own against any man.’ 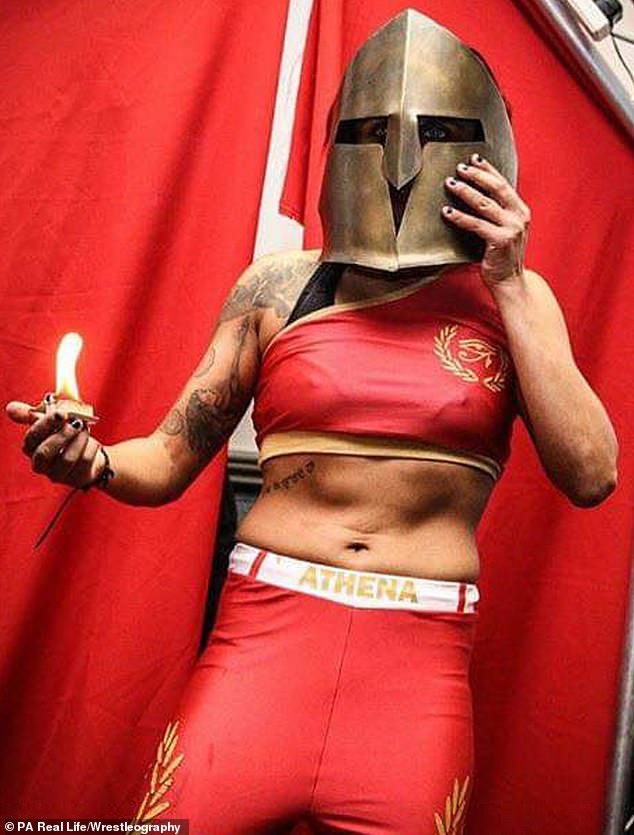 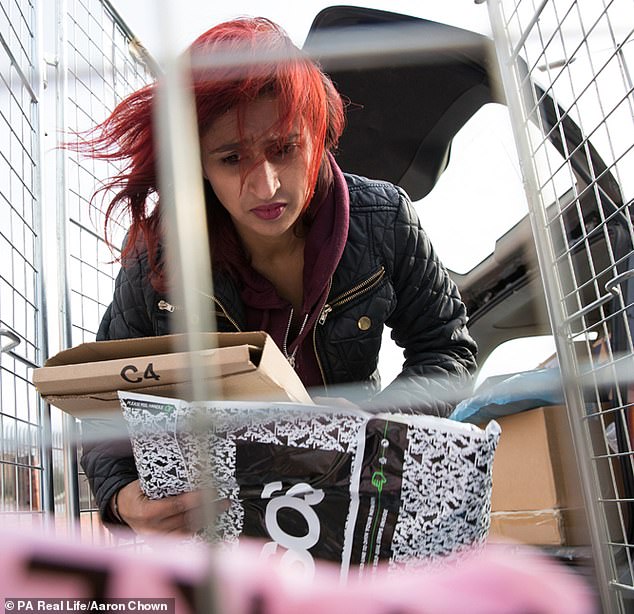 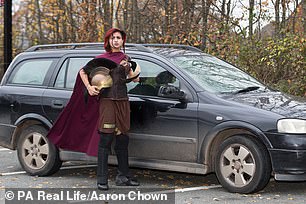 Above, Charlene with her car that she uses for deliveries

Hanging up her footie boots, Charlene then showed the same flair when it came to work – landing a job as an account manager for an events company, then working at a marketing agency.

But, never letting go of her dream to wrestle, turning 25, she was talking to a man at a party about its growing popularity in the UK and, after investigating further, she landed a training session with Coventry Pro Wrestling. 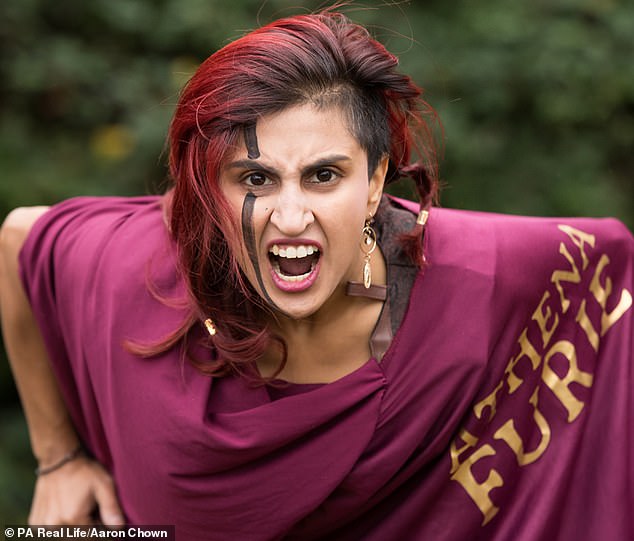 ‘Actually trying it out for the first time it really didn’t disappoint and I couldn’t have been more in love with the sport,’ she said. ‘Because I was mostly wrestling against men, I felt like I was really breaking down barriers.’

After just three months of training, Charlene found herself in the ring, at a real show in Coventry, playing Athena Furie.

‘The first time I walked out into the ring, with the music, the lights and hundreds of people watching, it was the greatest moment of my life,’ said Charlene. ‘It was like I had finally found my home. I came out of the tunnel to Kanye West’s song “Stronger.” I’d never felt like that before in my life.’

Calling herself Athena, after the Greek goddess of war and wisdom, Charlene prefers to compete against men, saying they ‘take more of a pounding.’

‘Men underestimate me at their peril,’ she continued. ‘In real life, I’m quite shy and reserved, but Athena is anything but that. She’s fiery and furious and can hold her own in the ring against any man.’ 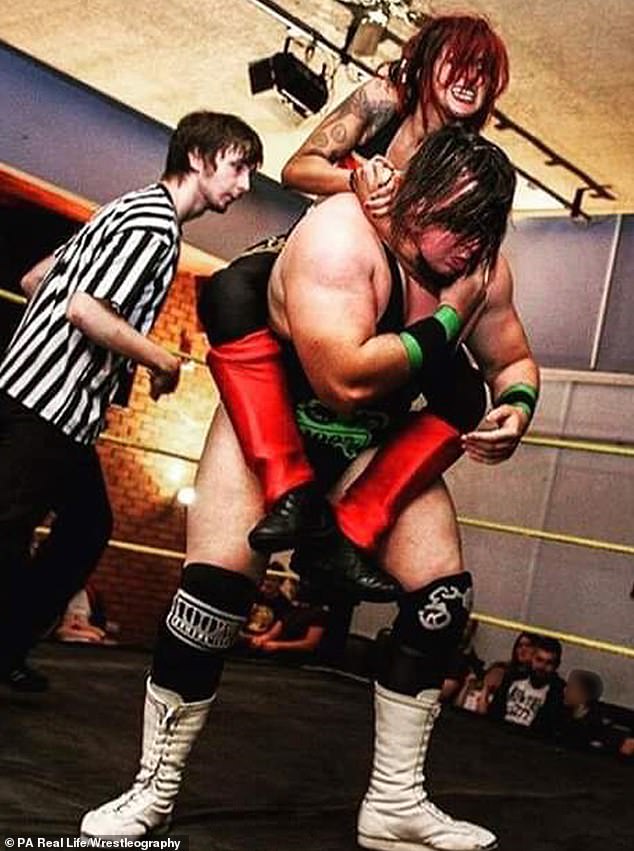 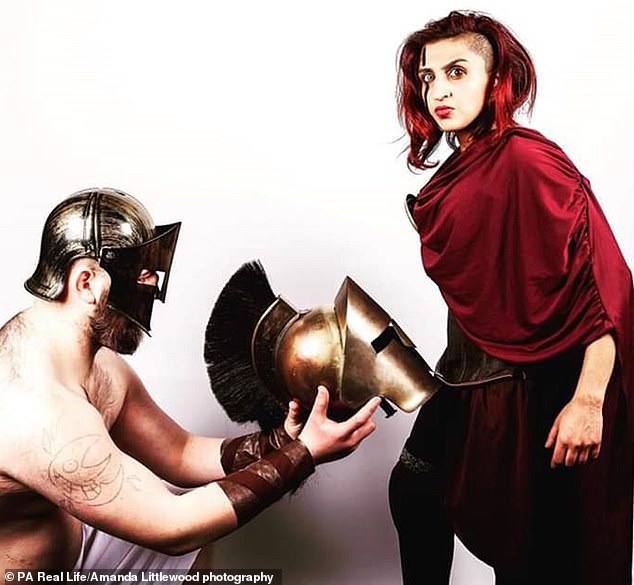 Since achieving her childhood dream, Charlene is often pitched against men which she prefers as they are able to take ‘more of a pounding’ 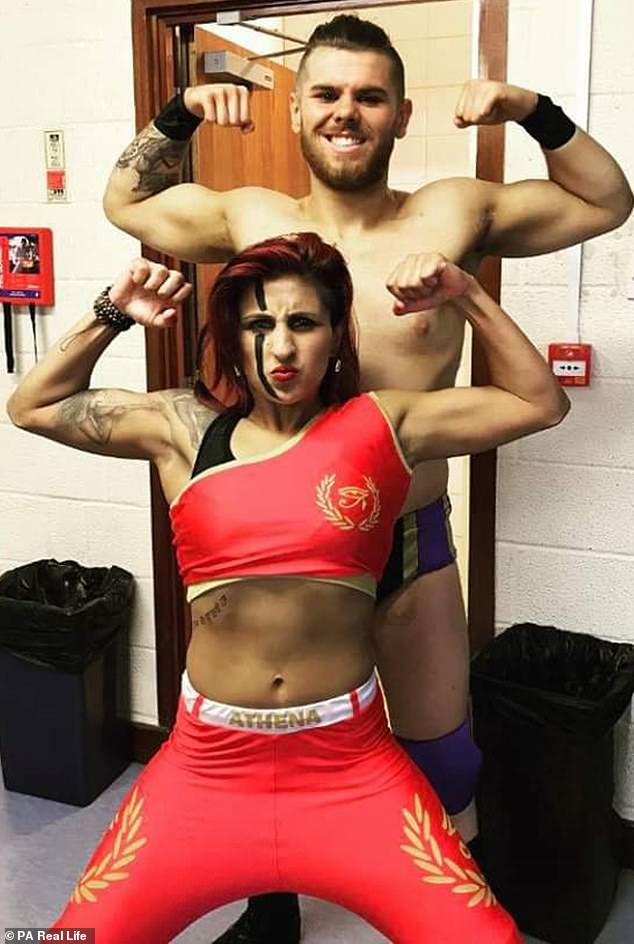 Now engaged to marry Kelly Griffin, 31, a pub manager, Charlene has decided to become a self-employed delivery driver, so she has more time to devote to the sport.

‘I’ve always felt like an outsider – from my culture, my family and people my age – but when I discovered wrestling, everything just seemed to fit into place,’ she explained. ‘It’s an environment where I can really express myself, where I can be whoever I want to be. I am unusual as a woman on the wrestling scene, but I hold my own.’

Despite her delight at her sporting prowess, Charlene is still sad not to have healed her relationship with her dad, who passed away last year.

‘My father was very traditional and he found it hard to accept that having an arranged marriage wasn’t a life I wanted for myself,’ she explained. ‘Then, when I was 21, my family found out that I had a girlfriend and my dad just couldn’t accept it.’

Despite her initial apprehension at her daughter involving herself in such a dangerous sport, Charlene’s mum Sandie has since relented and is supportive of her daughter’s decision to wrestle and of her being gay.

‘I am glad Charlene is doing something she loves and I support her fully,’ she said, speaking of her daughter achieving her dream. 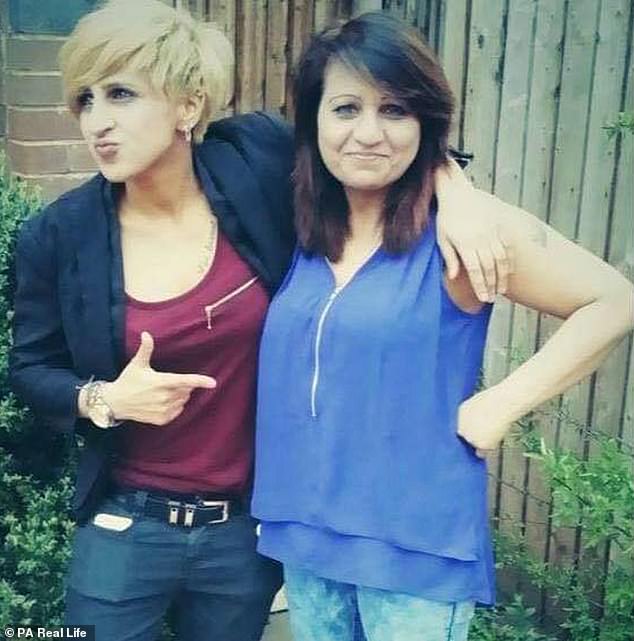 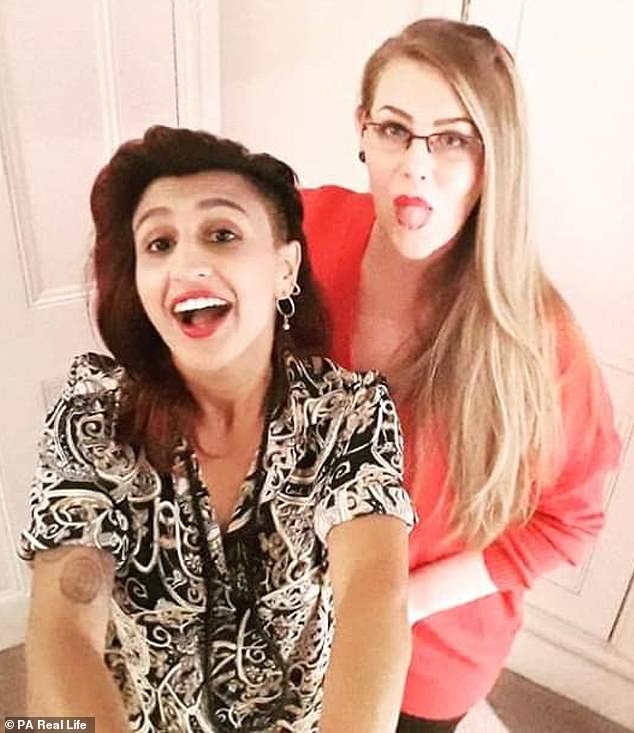 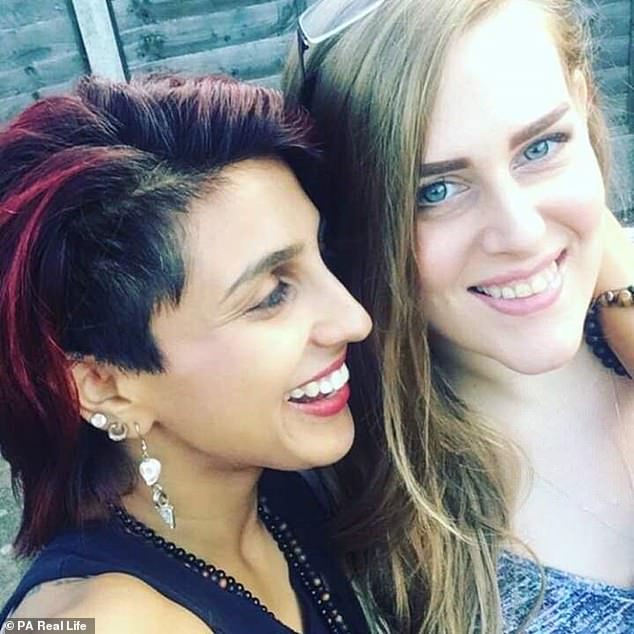 Loved up: The happy pair are engaged and are hoping to get married next year

Now, Charlene is a crowd-puller on the UK wrestling scene and competes against men and women.

‘I prefer wrestling men, as you can do more and they tend to be able to take more than a female opponent,’ she explained. ‘I’m small but that usually plays to my strengths, because I can slide between their legs and swing around them, tiring them out.’

But wrestling is not without its hazards.

Charlene has broken her nose three times – twice needing surgery – and has also damaged the sciatic nerve in her back, from being kicked there.

Never late for work after incurring an injury, Charlene seldom tells her colleagues about her life in the ring.

‘I know what people think about wrestling – that it’s a sport for little kids – so I usually keep it quiet,’ she added.

Still, the feisty character, who is hoping to get married next year, is not going to allow negative perceptions to hold her back from her ambition of becoming a professional. 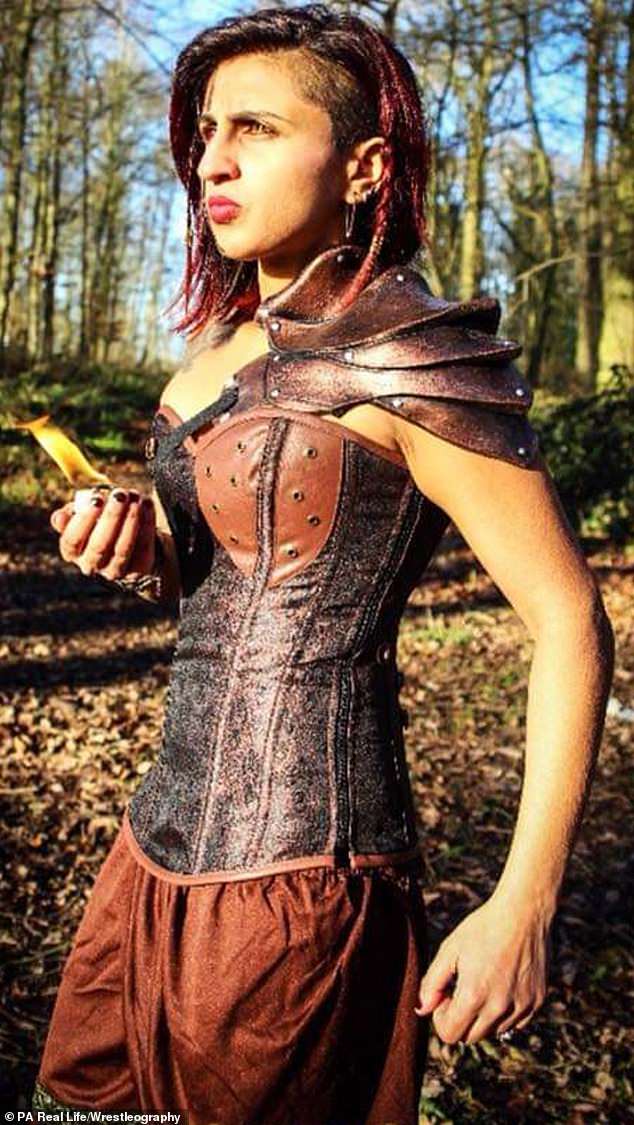 Charlene hopes to inspire other little girls to pursue their dreams, no matter what they are

‘I feel like I have finally found a community in which I fit and I want to do everything I can to chase my dream of being professional,’ she added.

‘Hopefully, I can also be an inspiration to other little girls now, in the same way that I was inspired by female wrestlers growing up. I feel like, if I can take on a 6ft man in a ring with hundreds of people watching me, I can take on anything.’