It would be financially reckless for most theatre productions to sell tickets more than a few months in advance. But Harry Potter and the Cursed Child – opening Saturday in Melbourne – is not your typical stage show.

On Friday, producers will release tickets for performances as far away as February 2020. There's a reason for their confidence: the first 200,000 seats were snapped up in just four days last year, which industry veterans describe as "unprecedented". Most weekend shows are now sold out until August. 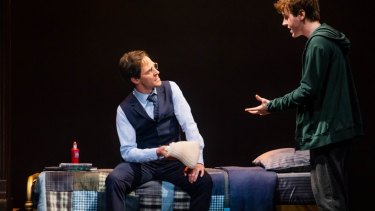 In Harry Potter and the Cursed Child, Albus and Scorpius become friends. An anti-spoiler campaign called #KeepTheSecrets prevents a detailed discussion of the plot but this friendship, for obvious reasons, is complicated. The story picks up where The Deathly Hallows ended, with Harry and Draco packing their sons off to the Hogwarts School of Witchcraft and Wizardry.

It’s a big deal to realise your parents were just human beings doing the best they could.

Written by Jack Thorne – in conjunction with Harry Potter creator J.K. Rowling and The Cursed Child director John Tiffany – it boasts genuinely jaw-dropping stagecraft; a mix of fire, water, flying and other feats that prompt strangers to ask each other during the intervals, "How did they do that?"

At its heart, however, The Cursed Child is a story about the past imprinting itself on the present. Harry, once an abused orphan, struggles with the realities of fatherhood while Albus finds his famous surname to be a burden. 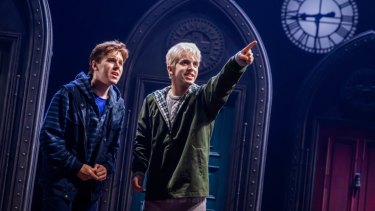 "It made me reflect on that time in your life [as a teenager] where everything your parents say to you is just the most idiotic thing," says Gareth Reeves, who plays Harry.

Like his co-stars Paula Arundell (Hermione Granger) and Gyton Grantley (Ron Weasley), Reeves is also a parent. "So I feel I could see that relationship from both sides," he says. "It's a really tricky time for parents, because they're struggling to communicate and connect with their children."

As Albus and Scorpius fight with their fathers, they turn to each other for support.

"It made me realise how important friendship is," Arundell says. "If you look at Harry, Hermione and Ron, they represent a bond that all children hope to have when they feel so uniquely alone."

Reeves: "This story feels timely. On the one hand, we have this magical romp but on other other hand, we’re talking about the dangers of loneliness and isolation. In the books, Draco is a foil for Harry but in this story, we get to hear the voice of that character; to hear him as an adult talk about that dark place he was in and what it means to be lonely."

Weasley, in contrast, tends to retain good humour in moments of crisis. "As a teenager, I actually printed the words, 'You've gotta laugh,' on my bedroom wall," Grantley says. "I can relate to Ron in that respect."

Recently, Reeves' eldest son, now 23, watched him perform in The Cursed Child. "I can already see he's starting to think about me at his age; about the fact he's the same age I was when I had him," Reeves says. "It’s a big deal to realise your parents were just human beings doing the best they could."