A federal plan to impose a new security test on overseas investors has sparked a backlash from foreign and state governments that fear the laws would breach trade deals and cost jobs.

The Morrison government risks a clash with trading partners over the national security measures due to go to Parliament within weeks, with Mexico arguing the changes are "inconsistent" with the regional Trans Pacific Partnership. 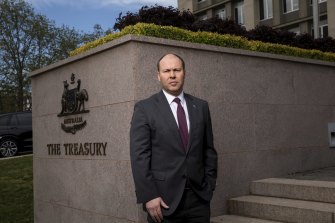 With the European Union and major business groups also warning against the changes, the government is facing growing demands to modify the draft bill to provide clearer rules for rejecting investors on national security grounds.

State governments joined the chorus against the bill with a call for greater clarity about the rules and a warning from Victoria that the retrospective power could trigger "sovereign risk" for global investors.

The draft legislation is a potential flashpoint in federal Parliament as MPs return to Canberra for two weeks to consider budget measures including a $4 billion “hiring credit” for workers aged up to 35.

Treasurer Josh Frydenberg announced the national security test in June with a pledge to apply the tougher rules from January on foreign investors in sensitive sectors such as defence, communications, ports and energy.

The law would allow the Treasurer to “call in” companies that had already gained approval for their takeovers or investments, with a "last resort" power that could force them to divest an asset.

The government of Mexico said the law would breach the Trans Pacific Partnership, an agreement among 11 regional economies from Japan to Chile, by forcing non-Australians to meet the national security rules.

“The imposition of this new test would be inconsistent with the national treatment provision of the TPP,” the country’s Ministry of Economy said in a submission to Treasury.

“The new national security test proposed by the Australian government will unduly create such discrimination.”

The effect on trade and investment was a dominant concern among governments and business groups in the Treasury consultation on the draft law, with the Business Council of Australia warning of a 40 per cent slide in global investment due to the pandemic.

Australia received $231 billion in foreign investment in the year to June 2019, according to the Foreign Investment Review Board, which scrutinises major deals and recommends whether the Treasurer accepts them.

“While the EU supports Australia’s sovereign right to protect its national security, including in its foreign investment policy, this must be balanced with the need for legal clarity and investor certainty,” wrote the EU’s ambassador to Australia, Michael Pulch.

While the draft legislation has been released for consultation, Mr Frydenberg has time to consider the concerns about the bill before seeking approval from the Coalition party room and putting the new regime to Parliament.

“At worst, we may end up with a system that is so broad in reach as to be open to abuse by future governments,” it said.

The Property Council of Australia, Amazon Web Services and the British Columbia Investment Management Corporation also called for clear definitions in the final legislation to avoid discouraging investors who presented no risk.

Queensland Acting Under Treasurer Graham Fraine said the government should define a "reviewable national security action" rather than leaving this for regulation to be drafted in the event Parliament enacts the bill.

The Victorian government told Treasury the draft legislation appeared to be "ambiguous by design" and could discourage investment.

"The broad-reaching and retrospective nature of the powers risk creating a perception of increased sovereign risk for foreign investors that could result in Australia being considered a less attractive investment destination," it said.

Get our Morning & Evening Edition newsletters