Lately, there’s been a lot of talk of a “new era” or “new chapter” at New York City Ballet. At the company’s spring gala at the David H. Koch Theater on Thursday, both phrases cropped up in preshow speeches by the new artistic director, Jonathan Stafford, and the new associate artistic director, Wendy Whelan. These speeches were far from lively, but fresh ideas have been emerging in other forms. The fruit of one was on the program: a commission for the choreographer Pam Tanowitz.

For many years, especially as ballet companies came under increasing pressure to identify and nurture female choreographers, City Ballet’s failure to call upon Ms. Tanowitz was puzzling. It’s true that she’s an outsider to ballet, but she knows her ballet history, and her proven talent in discovering drama and wit through formal invention puts her right in line with the company’s best traditions.

So it’s about time that she be given a shot. Yet, as it turns out, the commission is also a little ahead of schedule. Originally, the plan was for Ms. Tanowitz to make a work for the fall, but when another choreographer pulled out, Ms. Tanowitz — suddenly in-demand and busier than ever before in her career — stepped in.

Might that fast-forwarding account for why her new “Bartok Ballet” feels both overstuffed and undercooked? Its plentiful virtues are characteristic, starting with a wonderfully multidimensional use of stage space. In this ensemble piece, two dancers might oscillate in and out of a relationship intermittently identifiable as a duet, while someone else, way in the rear, lies on her back, raising a bent leg, and yet another dancer peeks out from a forward wing. 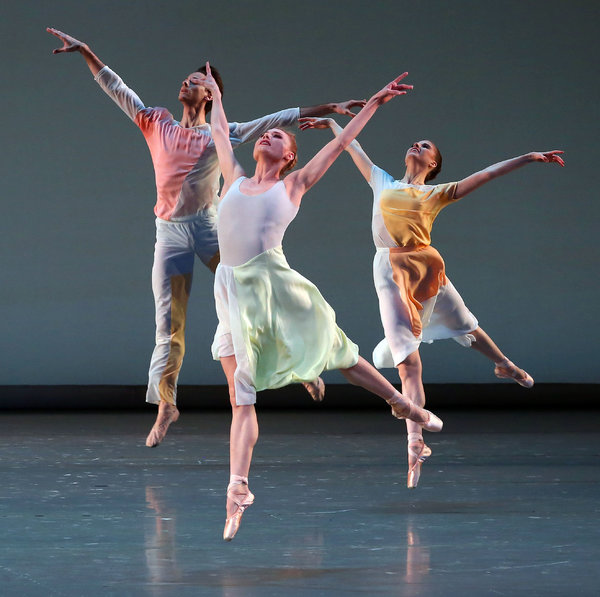 Many of the steps, especially for entrances, are stimulatingly eccentric: odd, sideways, hunched, heely. Ms. Tanowitz also responds to the fractured folk melodies and rhythms in the score — Bartok’s String Quartet No. 5, played a little tamely by the Flux Quartet on one lip of the proscenium — with bursts of footwork and balleticized folk gesture: hands on hips or behind the head.

The costumes, by Reid Bartelme and Harriet Jung, are gold to match the theater’s décor. The dance, like the score, is complexly symmetrical. It begins and ends with women, and at its center, two trios of women trade off forming and passing through golden gates, a beautiful image.

Throughout the dance, motifs are skillfully introduced, repeated, inverted. Yet the whole doesn’t quite come together as more than a demonstration of Ms. Tanowitz’s favorite methods. After how exceptionally well Ms. Tanowitz met the challenge of making a work for the Martha Graham company recently, it’s disappointing that she didn’t hit this one out of the park. Most fundamentally, the combination of this choreographer with this company and these dancers has not yet jelled.

That’s not a problem shared by Justin Peck, the troupe’s resident choreographer. Earlier on the program, the City Ballet dancers looked fully at home in his new “Bright,” even if this pretty appetizer of a dance lasted no longer than the speeches. Where Ms. Tanowitz fell short of the challenging, powerful music she chose, Mr. Peck — not for the first time — exactly matched a shallow, empty-headed score (Mark Dancigers’s “The Bright Motion: II”), using Sara Mearns as a kind of free spirit, slightly apart from the others and inspiring them into motion.

But if “Bright” was slight, the gifted Mr. Peck will have more chances. Crucially, so will Ms. Tanowitz. She’s already scheduled to make another work for the company next year. Too often, female choreographers are not given opportunities, as male ones are, to try again and grow. Signing up Ms. Tanowitz for two in a row is an excellent new-era move, a truly bright idea.