Sure, Wonder Woman may just be a character Gal Gadot plays on the big screen, but the Israeli-born actress also happens to be a superhero in real life. In addition to being one of the highest-paid actresses in Hollywood, the 35-year-old is a mother of two, a former Miss Israel, and an entrepreneur (she and her husband founded a production company called Pilot Wave Motion Pictures).

Since first stepping into her Wonder Woman role in 2016, Gadot has also taken her health and fitness to a superhuman level in order to do everything from fly around in a harness to sword fight on the big screen.

In fact, preparing for the upcoming Wonder Woman 1984 movie was an otherworldly undertaking in itself. When she wasn’t filming high-energy scenes or rehearsing stunts, Gal crushed it in the gym for about an hour almost every day with her trainer, Magnus Lygdback, to truly embody Wonder Woman’s strength (and toned physique!).

To keep up with the physical demands of being Wonder Woman, Gal’s daily diet had to be totally locked in, Lygdback tells Women’s Health. To keep her energy up while prepping for and shooting WW 1984, Gal ate five times a day (three main meals and two snacks), all focused on whole foods and a balance of protein, complex carbohydrates (like wild rice), healthy fats, and, of course, plenty of vegetables.

Lygdback’s main rule? Focus on nutrition in 17 out of every 20 meals. For the other three, Gal could enjoy the pasta, wine, or whatever else her heart desired. Otherwise, she simply avoided high-glycemic (a.k.a. blood sugar-spiking) carbs, like white bread, in order to keep her energy stable.

Under Lygdback’s guidance, here’s what Gal put on her plate in order to look and feel like a true superhero.

Usually, Magnus and Gal hit the gym to train for about an hour to kick off the day, so Gal could carry that badass energy with her through shooting (and to ensure hectic schedules didn’t derail her fitness).

Demanding mornings meant Gal needed to fuel her body with the good stuff from the get-go, so her breakfast was usually a colorful combo of poached eggs, quinoa, tomato, and avocado. (Yes, on-set chefs prepared all of her delish, colorful meals, btw.) 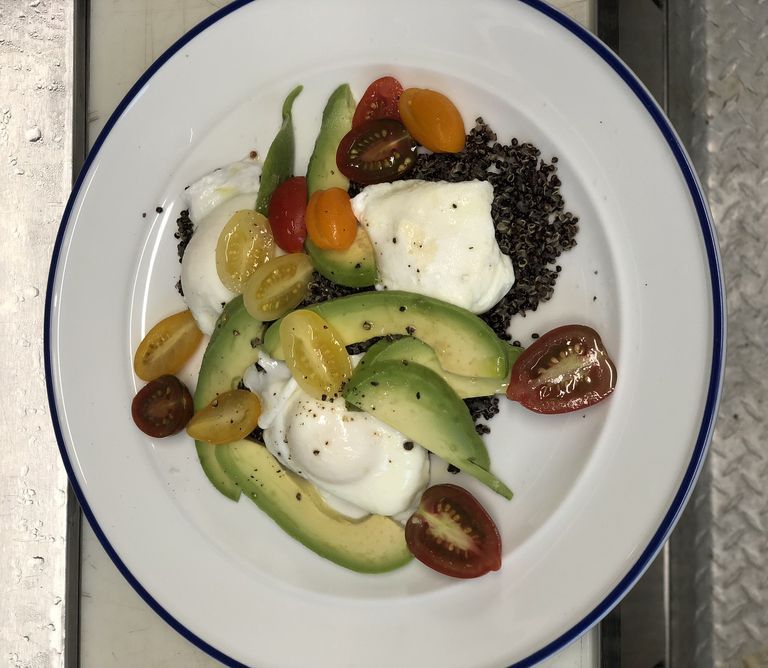 Having some healthy carbs from the quinoa ensured Gal’s muscles restocked and recovered from tough training sessions so she’d continue to see results, Lygdback says. Of course, she also downed lots of H2O in order to stay hydrated and keep her calories on her plate, not in her glass.

Since Wonder Woman was such a physically-demanding role (swooshing around in a harness really takes it out of you), Gal needed to eat a little something before lunchtime. 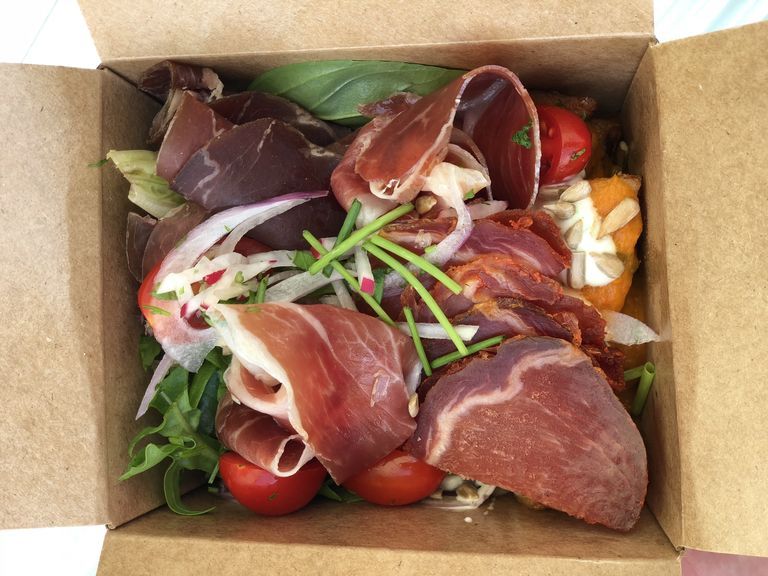 Her mid-morning snack looked more like a mini-meal than a quick handful of pretzels, though. One of Lygdback’s go-to picks for before lunch: a small salad with tomatoes, seeds, and cured meats. (I’m calling this a charcuterie board salad.)

One of Lygdback’s favorite proteins to serve up to his celebrity clients is fish, which often made an appearance in Gal’s midday meal. A fun variety of vegetables and color was the name of the game here, so lunch often involved a cut of fish, like seared tuna, with grilled bok choy, baby broccoli, pickled radishes, and peppers. Fun, right? 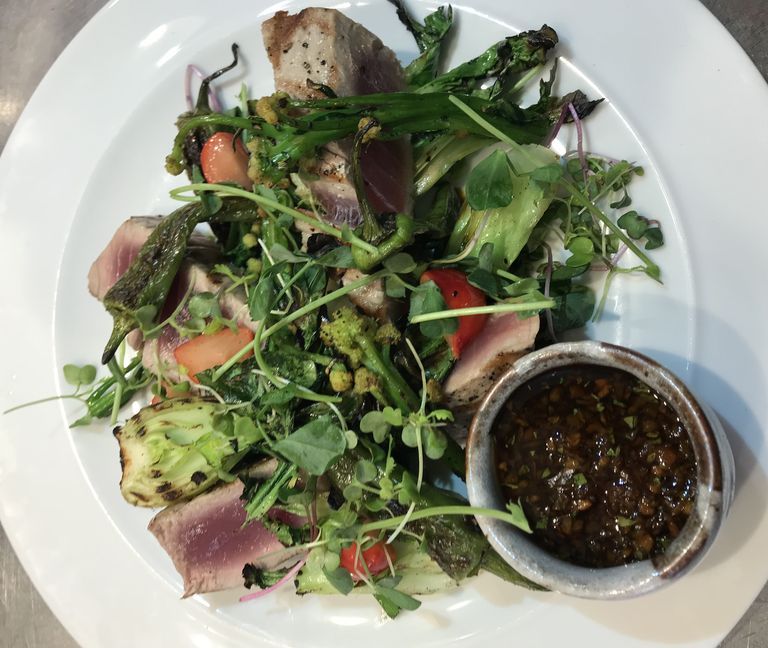 “You don’t have to eat just white rice and broccoli and chicken,” Lygdback says. His philosophy: The more creative and interesting you make eating well, the easier it is to stick to a healthy lifestyle. 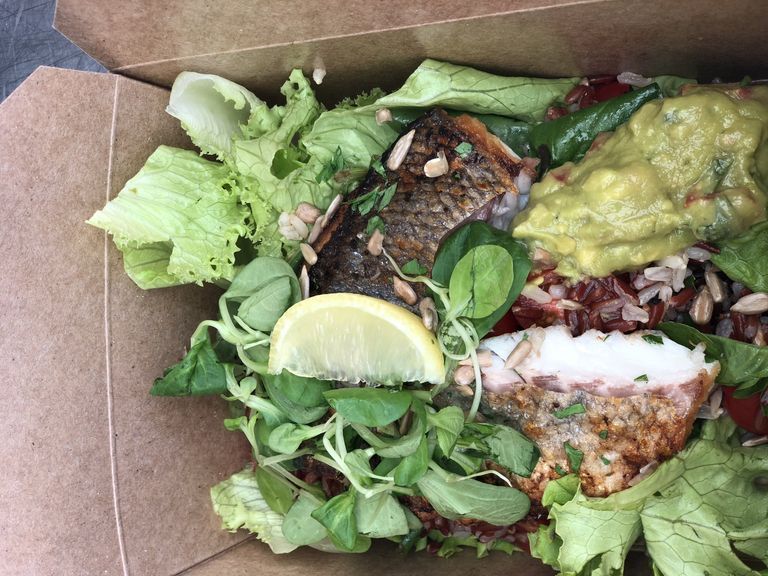 Typically, a simple salad with grilled mackerel, seeds, and a hefty scoop of guac kept her powering through ’til the end of long, exhausting days.

It’ll come as no surprise that Gal’s Wonder Woman dinners involved more fun plant foods, like kale, kimchi, and wild rice. Instead of fish, though, she got her protein from a piece of steak, such as grilled ribeye. 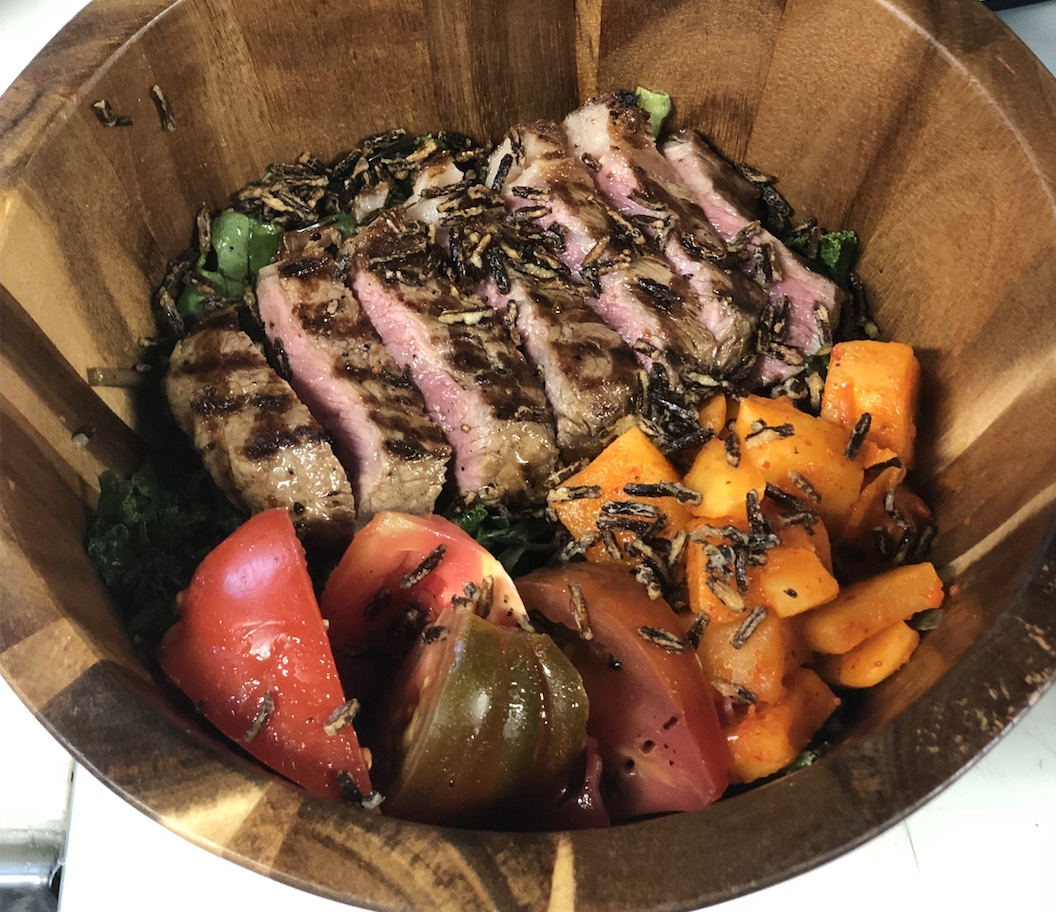 Not the leanest cut of beef you can opt for, but Lygdback was more concerned with the quality of Gal’s proteins (like whether they were grass-fed, organic, or wild-caught) than their fat content.

And when it came to Gal’s treat meals? Something tells me pasta was a go-to…