Trevor Noah was on hiatus last week, which means Monday’s “Daily Show” was his first chance to weigh in on the Mueller report — which, he noted, has been in the works for two years.

“You do realize the Mueller investigation has lasted longer than most of the people in the Trump administration, right? Yeah, this thing has been around for about 70 Scaramuccis. That’s a long time.” — TREVOR NOAH

Noah poked fun at how the general public voraciously tore through all 448 pages, complete with footnotes and despite massive redactions.

“This was a government report and we were all treating it like a ‘Fifty Shades’ meets ‘Harry Potter’ crossover, which, by the way, I’ve also read.” — TREVOR NOAH

“This document was covered in so much ink it looked like Adam Levine’s torso. Like one of the pages had nipples.” — TREVOR NOAH

He also pointed out that President Trump seemed to have forgotten many things that happened only a year ago, answering with variations on “I do not recall” or “I do not remember” 37 times during questioning. Noah then ran a clip of Trump’s chastising Christine Blasey Ford for not being able to answer every detail from 30 years prior during an alleged assault by Brett Kavanaugh, now a Supreme Court justice.

“See? This proves my theory: Everything Trump says about women is actually true about himself. He’s always making things up, he’s overly emotional and, most of all, he’s the one with the great boobs.” — TREVOR NOAH

The Songs of Angry Men

While the Mueller investigation has taken over most of the American news media, international news has offered more fodder for the few hosts on duty this week (Stephen Colbert, Jimmy Kimmel, Seth Meyers and James Corden are all off until next Monday). Conan O’Brien took a personal professional interest, he said, in Volodymyr Zelensky, a stand-up comedian who was just elected president of Ukraine.

“That’s right: He’s president of Ukraine, he’s a comedian, he’s already sold his inaugural address as a one-hour Netflix special. I looked up their Constitution: The order of succession in Ukraine goes comedian, juggler, magician, then secretary of defense. That’s how it works. After hearing about it, Elizabeth Warren signed up for improv classes.” — CONAN O’BRIEN

In France, Noah said, Yellow Vest protesters fighting against economic inequality are angry about the millions of dollars donated toward the rebuilding of Notre-Dame after its devastating fire.

“The ‘Les Misérables’ of France are pissed off and that’s not a good thing, because the last time that happened we had to listen to Russell Crowe sing. That’s why they invented the guillotine in France in the first place.” — TREVOR NOAH, referring to the 2012 film version of the musical drama

“The White House Easter Egg Roll has been an annual tradition since 1878. And here’s a fun fact: The first Easter Egg Roll was won by a young Bernie Sanders.” — JIMMY FALLON

“This is where American traditions never make sense to me. We’re supposed to pretend that ridiculous creature belongs at the White House standing next to the Easter bunny?” — TREVOR NOAH, showing President Trump posing with the Easter bunny

“This is two big holidays and the fact that they came at the same time, this created a lot of stress for one person who accidentally double-booked himself for both events. I’m talking, of course, about Jesus.” — CONAN O’BRIEN, on Passover and Easter

Vir Das, the Indian comic and star of ABC’s “Whiskey Cavalier” will drop by “Conan” for a stand-up set. 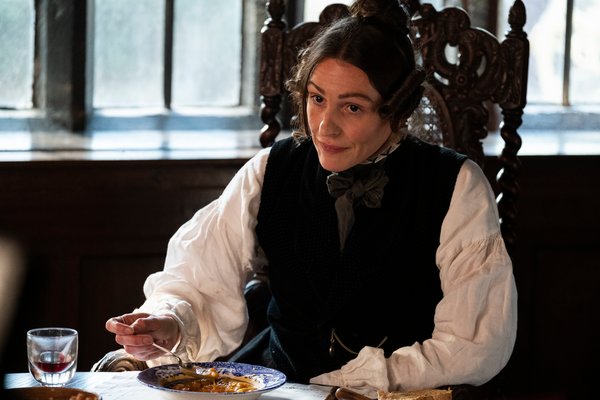 HBO’s new historical mini-series “Gentleman Jack” has been a decades-long passion project for the British TV writer Sally Wainwright, and, as James Poniewozik says in his Critic’s Pick for the week, the final product has been worth the wait. Suranne Jones stars as Anne Lister, a respected diarist and landowner often referred to as the world’s first modern lesbian.