‘Let’s Get Ready to Stumble’

Joe Biden officially declared his presidential candidacy on Thursday, and late-night hosts couldn’t wait to weigh in. Conan O’Brien noted that many see the former vice president as the Democrat most likely to win in 2020, despite mixed reactions to his announcement.

“Some Democrats don’t like Joe Biden, but of all the current possibilities, he has the best chance of beating Donald Trump. Well, coming in second: heart disease. No, I think it’s diabetes. There’s a long list.” — CONAN O’BRIEN

Trevor Noah mentioned that Biden has run for president before — and that his 1988 bid was cut short after he was accused of plagiarizing a speech. Noah was incredulous and nostalgic that plagiarism was, not so long ago, enough to end a campaign.

Biden once said that if he and Trump were in high school, he’d “take him behind the gym and beat the hell out of him.” Noah thinks a public fight benefiting a charity is in order.

“It’s a win-win. Biden gets to stand up to Trump and Trump gets to secretly keep the money for charity. Everyone wins.” — TREVOR NOAH

Jay Leno Is Not Into Edibles

The former “Tonight Show” host Jay Leno made a return visit, introduced as an angry man Jimmy Fallon had seen shouting outside. Once on stage, Leno ranted about American fast food, the obesity epidemic and the pointlessness of edible underwear.

“It was reported today that Joe Biden is leading Bernie Sanders by eight points. Yeah, no, no, not in the polls — in their weekly game of shuffleboard.” — CONAN O’BRIEN

“[Biden] spent eight years as America’s vice president and surprise masseuse, but before that, he had a whole career that you might not know about. You know, kind of like how some people only know Billy Ray Cyrus from Lil Nas X’s ‘Old Town Road’ remix. And like Billy Ray, Biden was doing his own thing for decades before he was made cool by a young black man.” — TREVOR NOAH

After several days of mentioning (for some reason) Dead or Alive’s catchy 1985 hit “You Spin Me Round (Like a Record),” Jimmy Fallon enlisted Paul Rudd for a shot-by-shot re-creation of the video. It was their third video remake, and they spent most of Wednesday shooting it — the same day Wu-Tang Clan was performing on “The Tonight Show.”

Rudd said he FaceTimed his kids while in costume. “I traumatized them,” he said. “My son immediately said — he goes, ‘Oh my God, you look like a Real Housewife of Atlanta.’ And then he said, ‘No — Orange County.’” 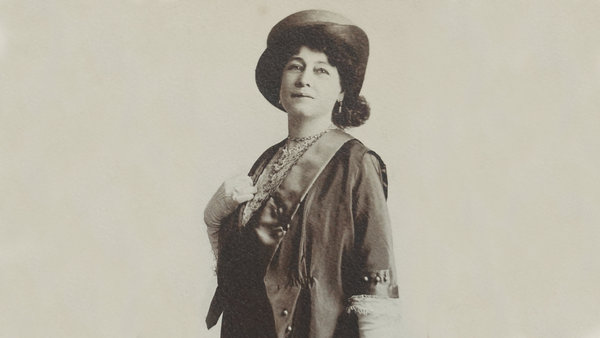 A new documentary, “Be Natural: The Untold Story of Alice Guy-Blaché,” “seeks both to help rescue Guy Blaché from oblivion and to explain how she got there in the first place,” says our critic A.O. Scott. If you’re asking “Who?” you’re not alone — Guy Blaché was an important figure in cinema’s early years, but the record of her achievements has been all but erased.