George R.R. Martin was surprised to learn that his 1980 novella “Nightflyers” was being turned into a television series by Syfy, mainly because he hadn’t realized that he’d sold the TV rights to it.

When he heard that the show was in development, he said, his first reaction was shock and outrage: “Wait a minute! How can they make a TV series? No one purchased any rights from me!” But when he read the fine print in the movie rights contract he signed in 1984 (resulting in a poorly received 1987 adaptation), he realized the TV rights had been included.

True to Martin’s penchant for killing off key figures, the original story, about a team of scientists on a haunted spaceship trying to make contact with a mysterious alien race, had seven of eight characters dying in quick succession. “I was like, ‘What’s going to be in the fourth episode?’” Martin said. “Who’s going to watch four seasons of a spaceship full of corpses?”

So changes were made for the series, which debuts Sunday on Syfy. But they were devised mostly without Martin’s input because of his exclusive deal with HBO. He was able to share a few thoughts, though, including about an old casting decision he’s always regretted.

In a phone interview, Martin discussed this, future “sexing” and how the largely unloved “Nightflyers” movie saved his career. He also shared a few details about his “Game of Thrones” successor series, which he still refers to as “The Long Night” even though HBO told him not to. These are edited excerpts from the conversation.

The character Melantha Jhirl is a black woman in the novella, but on one of the book covers and in the 1987 movie adaptation, she was white. How did you feel about that whitewashing then and about the new show’s casting of the black actress Jodie Turner-Smith?

Just having her cast was very gratifying to me after what happened in the 1980s. I wrote the lead character as a black woman — in fact, the name Melantha means “black flower.” And initially, when the story was first published in a magazine, Analog, they put an astronomical cover on it, just the spaceship. But a couple of years later it was reprinted in a short story collection, and that was the first one to show a character on the cover. And to my surprise and shock, the character was a white woman! I phoned up the editor and I said: “This is wrong. She’s explicitly described as being black.” And they said: “Yeah, we know that. But you want your book to sell, don’t you?” “Well, yes, I would like my book to sell.” “Well, if we put a black woman on it, it won’t sell.” To my shame and regret ever since, I caved. And then, when it was made into the movie, they cast a white actress in the role. I don’t know if that was for the same reasons.

But it’s always bothered me, and I’ve always thought I should have done more. Today I’m more famous and more powerful but then, I was just one writer among many struggling to make a living. So when I learned that they were making a TV series, that was the one thing I came in on: “Let’s cast a black actress.” And we were all on the same page, and we finally got it right. And Jodie Turner-Smith is marvelous in the role.

Yes, my fourth novel. Although it was well-reviewed, nobody bought it, at least not in its original incarnation. It tanked, and suddenly my whole career seemed to be in danger. I had bought a new house, based on the prospect of “Armageddon Rag” being successful, and I had to take out a second mortgage. I was living on my credit cards. I started taking real estate courses. 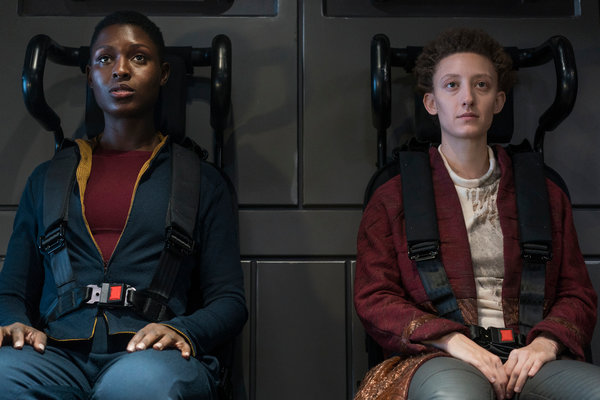 So when, out of the blue, “Nightflyers” got greenlit, getting that money, the pickup fee, actually saved me — it enabled me to get out of debt. Everything I’ve written since exists in no small part because of that film. Otherwise, I would be showing people houses in Santa Fe.

Were you surprised someone wanted to turn “Nightflyers” into a series? Almost everybody dies in the novella.

I was amused by the idea of it becoming a TV show. I’ve only seen the pilot, but they’ve changed things considerably. You can still see many of my characters, and some of the basic tropes and plot points. It’s a much larger cast, and a much different background. But it’s still a science-fiction/horror hybrid, more “Alien” than “Star Trek.”

One of the aspects of the novella they’ve incorporated is the future’s more liberated attitude about sex as a recreational activity, or “sexing,” as the characters call it.

Well, you know, I wrote that after the sexual revolution and the hippies. I think it’s a healthy attitude, and hopefully it will arrive someday in the future here! That was certainly my intent, to portray how sex can be more casual. It can be, “Oh, I had sex with Bill.” Like, “Oh, I had dinner with Bill.” Why do the two have to be so different? If you’re married to Fred and you have dinner with Bill, Fred doesn’t care. But if you say you had sex with Bill, suddenly it’s divorce and trauma. Why? I don’t know. It’s part of our religious upbringing, a legacy of past centuries. But 400 years in the future, when “Nightflyers” was first set, it would certainly be a very different attitude.

How is the “Game of Thrones” successor series pilot progressing?

How does Goldman’s vision vary from your original concept, with the “Age of Heroes” and the coming of the first White Walkers?

Well, she had to add something. If you look at the published books so far, there’s really very little material about that — a sentence here, a sentence there. Old Nan tells a tale that takes up a paragraph. So Jane had to create the characters, the settings and some of the events, and we had to look at everything that was said and say, “O.K., here’s what was said at this point, we need to make it consistent to that.” We kicked around some ideas and I made some suggestions. But mostly it’s been Jane running with it. It’s set thousands of years before “Game of Thrones.” King’s Landing does not exist. The Iron Throne does not exist. There are no dragons there.

There might be! [Laughs.] I will say nothing about that. Maybe the ice spiders were just a legend! Have you read the new book? [“Fire & Blood: 300 Years Before A Game of Thrones (A Targaryen History)”]

I’m in the middle of it, and I’ve been wondering if some of the prehistory could be fodder for any of the successor series. There are the obvious tales — Aegon’s Conquest, the Dance of the Dragons — but it could also be interesting to look beyond the kings and wars and focus on the regular people of the realm.

I wanted to do a show called “Spear Carriers,” which would actually be set during the events of “Game of Thrones,” but it wouldn’t be following Dany, Tyrion and Jaime. They would all be there in the background like Hamlet, and it would be more like, “Here’s a story about a guy in the City Watch; here’s a story about a prostitute at one of Littlefinger’s brothels; here’s a story about a mummer who’s in town to do juggling and tricks.” And they all get caught up in the events. I think that kind of show would be a lot of fun to do. Maybe I’ll be able to convince them to do it!