It’s hard to believe it’s the first time these these two have walked a red carpet together, but it’s true. At April 22’s Avengers: Endgame premiere held in Los Angeles, Chris Pratt and Katherine Schwarzenegger finally made their red carpet debut. Not only do they make an extremely good-looking duo, but the photos show just how happy they are together.

The two have been romantically linked since Father’s Day in June 2018, and they confirmed their relationship December of that year when Pratt posted a birthday message for Schwarzenegger on Instagram. Then, they announced their engagement in January when the Guardians of the Galaxy star posted a photo on Instagram showing off Schwarzenegger’s ring with the caption, “Sweet Katherine, so happy you said yes! I’m thrilled to be marrying you. Proud to live boldly in faith with you. Here we go!” She shared the same image and wrote, “My sweet love. Wouldn’t want to live this life with anyone but you.”

If you think about it, the Marvel actor and author have had quite the whirlwind romance, but they clearly wouldn’t have it any other way. They certainly seem excited about their upcoming nuptials and that they have each other in their lives.

Like Pratt told Entertainment Tonight at the Endgame premiere about wedding planning, “I’m up to about my neck, you know? That’s pretty deep. That’s up to about 5-foot-something. I’m in it baby, I’m in it. It’s good. It’s a good time!” 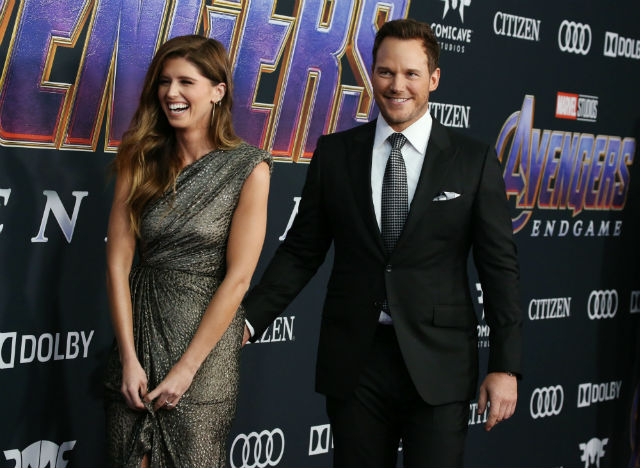 The actor who brings Star-Lord to life also told Good Morning America in February that he was “pretty involved” in wedding planning. As for Schwarzenegger, she previously told Us Weekly in March about getting marriage details in order, “Oh, yeah. We get everything done. I mean, we’re pretty good with time management so it works out really well.”

While chatting with ET, Pratt also gushed about how wonderful his life is right now. “We’re all very blessed,” he said. “[It’s a] good time to be here for the Avengers premiere and also good things happening for me in life. I just count my blessings every day.” Schwarzenegger feels the same way, as she also told Us Weekly in March about her future with Pratt, “Everything’s really exciting about it. It’s an exciting time in my life … [a very] blessed time in my life.”

They certainly seem to be blissfully happy and head over heels in love with each other, which they once again proved during their official red carpet debut.