In the formative years of life, most of us learn the basic concepts of human decency. Say “please and thank you.” “Sharing is caring.” The Golden Rule.

Then we grow up, and as we encounter the world’s messiness and harsh realities it can be easy to forget what it means to be “good” to others. Television has excelled at reflecting (and sometimes reveling in) this moral slide, in the shameless narcissism of shows like “Seinfeld” and “You’re the Worst,” in the emotional terrorism of “Mad Men” and “You,” and in the sociopathic criminality of “Breaking Bad” and “The Sopranos.”

In the last several years, however, a few shows have taken a different approach, one that unambiguously depicts adults stumbling to (re-)learn empathy and respect.

Their lessons aren’t presented merely as arcs following the natural progression of a character’s evolution from flawed to enlightened. Instead, in the mold of educational children’s shows, human decency is the premise. Unlike in other series that explore the dark depths of human nature, the characters in these shows actively try to suppress their selfish and harmful impulses in ways both minor and profound. At the very least, the people in their lives (and the shows’ writers) are pushing them toward betterment.

[Sign up for our “Game of Thrones” newsletter for a rewatch guide for the first seven seasons.]

On “The Good Place,” which just wrapped its third season on NBC, Eleanor (Kristen Bell) and the rest of the gang have to own up to their poor actions on earth in the afterlife, in hopes of escaping eternal punishment in the Bad Place. HBO’s “Barry,” which returns for its second season on March 31, is built around a marine turned hit man (Bill Hader) who wants out of the game but finds himself unable to quit without hurting innocent people.

For Nadia (Natasha Lyonne), an East Villager with intimacy issues in the recent Netflix hit “Russian Doll,” the key to hacking her repeating time loop of death and resurrection is to be more selfless. In the most recent season of another Netflix favorite, “BoJack Horseman,” the titular self-destructive TV star (voiced by Will Arnett) must begin to make amends for the untold number of people he has hurt — most of them women.

As is often the case in real life, change isn’t borne of these characters’ decisions to suddenly live more honorably; it is borne of self-interest in extreme circumstances. When Eleanor, a habitual liar and gleeful narcissist, first arrives in the Good Place, she believes she was brought there by “accident.” She spends much of Season 1 working secretly to become a better person so she can earn her place before the neighborhood architect, Michael (Ted Danson) finds out.

With the help of her assigned soul mate in the Good Place, Chidi (William Jackson Harper), a moral philosophy professor, Eleanor is introduced to ethical concepts and slowly begins to develop positive habits. Notably, she admits the truth about her earthly behavior to Michael and the rest of the neighborhood, setting into motion the show’s interrogation of “good” acts versus “bad.” 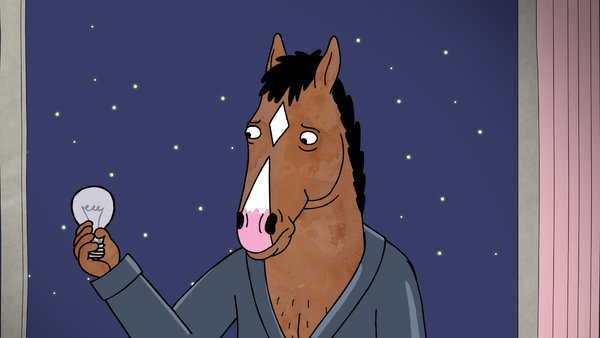 Eleanor’s progress is essential to the story its creator, Michael Schur, has crafted. As she continues to form real, healthy relationships and seeks redemption, the premise of the show cleverly shifts in Seasons 2 and 3. The validity of the points system used to determine entry into the Good Place frequently comes into question — even those who live their lives perfectly will not make it to paradise, we learn in Season 3 — and so does the cynical view held by leaders of the Bad Place, that humans are fundamentally incapable of being good.

Moral evolution is embedded in the DNA of “Russian Doll,” too, though the lessons in kindness sneak up on you. What begins as a dark comedy with echoes of “Groundhog Day” soon takes a twist in Episode 4, when Nadia meets Alan (Charlie Barnett), an uptight depressive who is also caught in a loop reliving the same day over and over.

Alan forces Nadia to reckon with the idea that their fate is “purgatorial punishment for being a bad person.” Nadia — who self-identifies as someone who never sticks out her neck “for nobody” — denies such a binary distinction between good and bad.

But like Eleanor in “The Good Place,” Nadia unwittingly begins to adjust, as each new loop reveals ways to do things differently and change the trajectory of other people’s lives. Her acts start out small, but they have positive impact: In one example, she develops a special interest in a societal dropout who lives in Tompkins Square Park; at one point she tracks him down at a shelter and prevents someone from stealing his shoes.

In the seventh episode, it’s implied that Nadia and Alan’s intertwined death cycle stems from her general disregard for others: When they unknowingly encountered each other in a bodega that first night, instead of helping Alan — who was dangerously inebriated — Nadia ignored him, and he wound up killing himself. By the end of Season 1, both Nadia and Alan ostensibly find a way to break their cycle (and find inner peace), in large part by helping each other avoid repeating harmful mistakes.

The transformations of Eleanor and Nadia are driven by a sense of urgency and an end goal: to get to the Good Place, to end the traumatic cycle of death and rebirth.

It’s not as clear what the end goals are for Barry and BoJack. But as with Eleanor and Nadia, their struggles to be better reveal the tensions that can arise between acts of outward self-improvement and the motivations behind them. A sudden change or a few good-faith actions don’t mean much if you avoid accountability for your mistakes.

Barry has been able to justify his work as a hit man by convincing himself he’s taking out “bad guys,” but in the second episode, he is faced with the aftermath of a kill for the first time: a grieving father.

He insists it is Fuches, his handler and family friend, who made him who he is, and that he’s capable of doing the right thing. Barry isn’t quite ready to accept that the “right” thing includes owning up to his crimes and facing the consequences.

In the Season 1 finale, Barry has rid himself of Fuches and is living a “normal life,” but his past is resurrected when a detective (Paula Newsome) realizes who he is and insists on arresting him. “I’m a good person,” Barry pleads. “I help people out.”

The detective is unfazed and calls him a murderer. So Barry kills her out of self-preservation. Afterward, he vows to live a decent existence “starting now.”

At the end of Season 5 of “BoJack Horseman,” the self-loathing, melancholic horse-actor at its center seems finally to have made a similar vow; it ends with his entering rehab. But it has taken a lot of work to get to this point, as he has spent most of the series being a self-absorbed cad, occasionally demonstrating only glimmers of progress that seem always to fall short of countering all the terrible ways he has treated others.

BoJack sinks to new lows in Season 5, spiraling into prescription drug addiction. It becomes clear he has yet to confront his past, including the women he has manipulated and possibly abused. In the penultimate episode, a drugged up BoJack nearly strangles his co-star and sometime love interest to death while shooting a scene, forcing him to recognize how much hurt and pain he has caused everyone around him.

BoJack asks his friend and writer Diane to write a takedown of him instead in hopes of assuaging his guilt. “I’m a bad guy, and the world needs to know,” he pleads.

Diane insists there are no “good” or “bad” guys, and that he needs to stop using this idea as an excuse for his actions. “No one is going to hold you accountable,” she tells him. “You need to take responsibility for yourself.”

If “Russian Doll” and “The Good Place” place solid faith in humans’ capacity for change, “Barry” and “BoJack” are more cautiously optimistic. They insist that facing consequences for your actions is just as important — maybe more so.

Explicit conversations around morality show up time and again in these shows because they are the narrative. What would have prompted a “Very Special Episode” in a family sitcom of a different era is instead the driving force of these stories. Unlike the cheesy relics of that period, though, “BoJack” and its ilk avoid coming down too hard on what’s “right” or “wrong,” positing only that there are definite ways to be better.

Each show lays out a map for moral progression (listen to others; be honest; seek help for your addictions), and if the protagonists don’t always follow that map themselves, the lessons are there for the viewer.

It’s almost as if, having tired of the many ways TV itself has contrived to break bad, the writers sought to show that going back to basics can be equally effective.