Squad reunion! While Taylor Swift rocked out with a small band on Saturday Night Live, backstage she had a dressing room full of supporters.

“Oh no, my bestie is a bad bitch,” the “All Too Well” songstress, 31, mouthed along to a TikTok sound in a clip posted on Saturday, November 13. As Swift sat in the SNL greenroom wearing a black blouse, tan skirt and red lipstick, she flipped the camera to reveal Selena Gomez sitting beside her on the sofa.

The Only Murders in the Building star, 29, wore a cozy white sweater with her hair in a chic bob, posing for the camera with a wide smile. 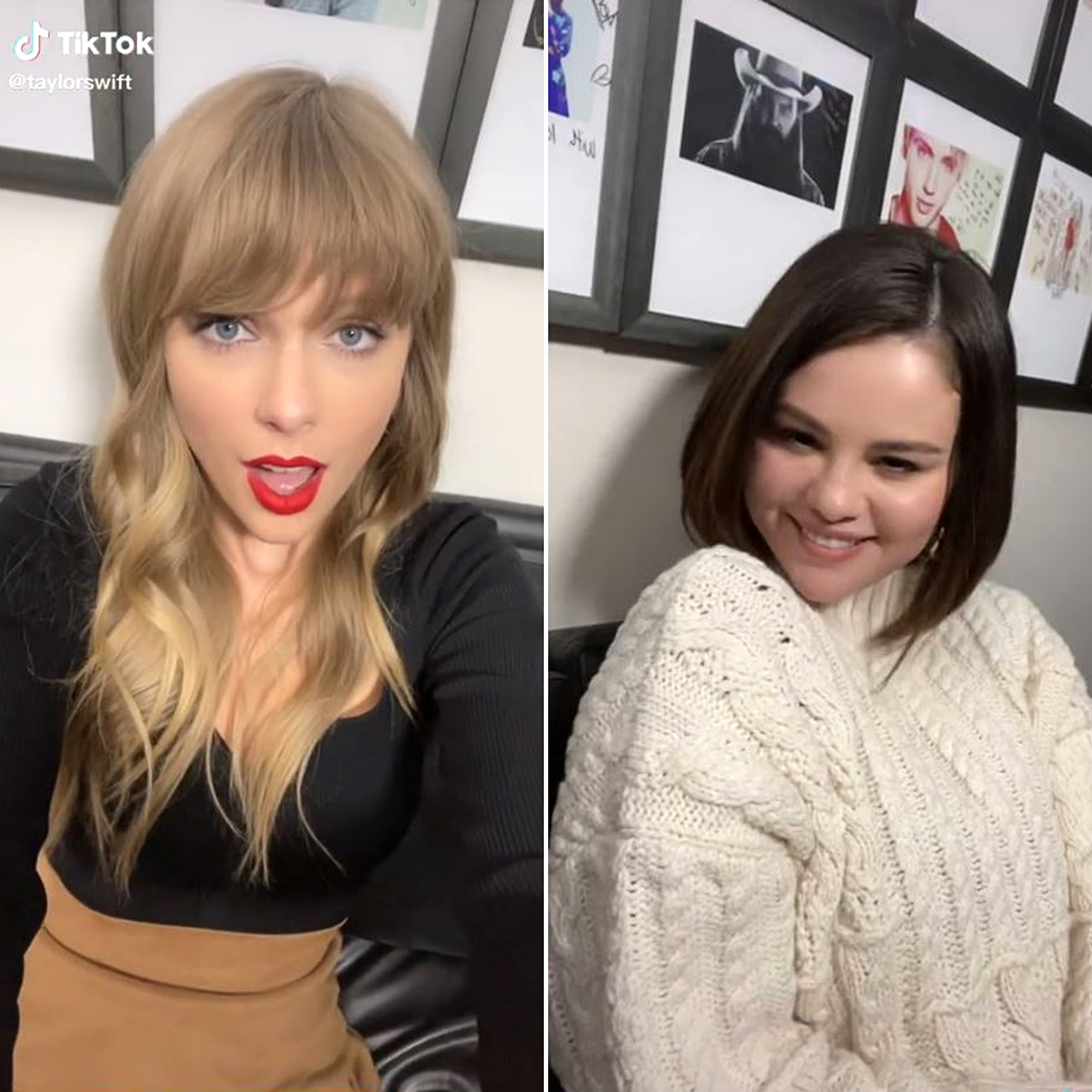 “NO BECAUSE THIS MIGHT BE ONE OF MY FAVOURITE TAYLENA INTERACTIONS ACTUALLY,” one fan tweeted on Saturday, as another wrote, “I KNEW SHE WOULDN’T LET US DOWN. TAYLENA SUPREMACY.”

A third fan even speculated about the Pennsylvania native’s bright red lip color, tweeting, “Definitely Taylor use @rarebeauty. TAYLENA MOMENT,” alongside a snap of Gomez’s red lipstick hue from her Rare Beauty line.

The Wizards of Waverly Place alum was not Swift’s only friend lucky enough to watch her live performance from the wings. 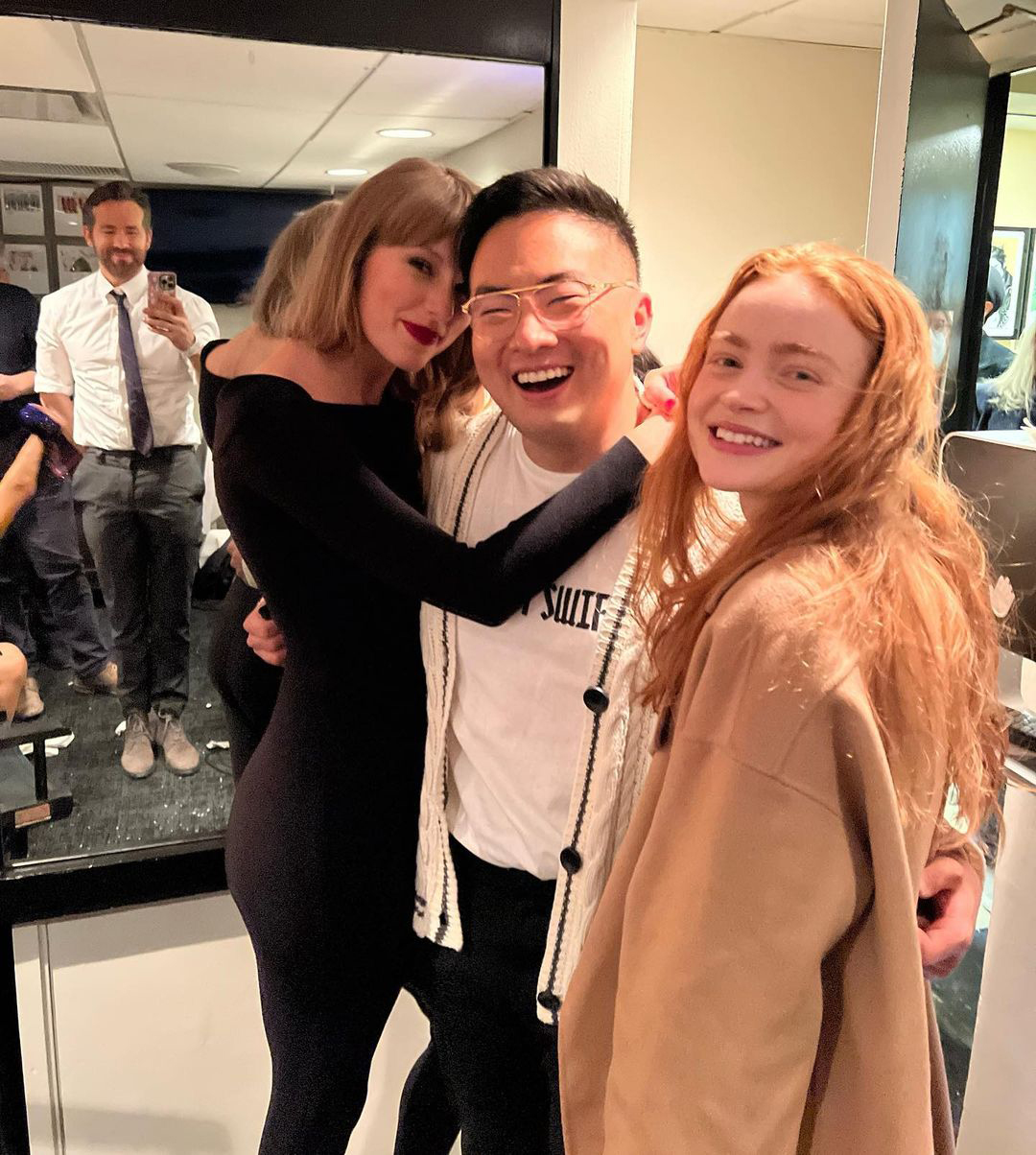 Cast member Bowen Yang shared a sweet snap with Swift — in her performance getup of a black jumpsuit — and Sadie Sink early on Sunday, November 14.

“RIGHT THERE WHERE WE STOOD!!!!!!,” the SNL star, 31, captioned an Instagram snap with the women, who both appeared in Swift’s All Too Well short film.

In the background of Yang’s joyful photo, Ryan Reynolds is seen in the mirror, taking the trio’s picture. The Red Notice star, 45, and wife Blake Lively also were photographed attending the show’s afterparty with Swift and Sink, 19.

“Whose gorgeous foot is that?!,” the Gossip Girl alum, 34, commented on Yang’s post, seemingly referring to the sparkly blue pump that’s visible in the dressing room mirror.

Later on Sunday, the Grammy winner even teased a brand-new Red (Taylor’s Version) music video, directed by one squad member in particular.

“SURPRISE! NEW MUSIC VIDEO TOMORROW at 10am ET 🚨,” Swift captioned Instagram footage of a red velvet cake. “I finally got to work with the brilliant, brave, & wickedly funny @blakelively on her directorial debut. Join us as we raise a toast, and a little hell.”

Ever since Swift’s big break in the music scene, she’s redefined the term “squad,” often showing off snaps and gatherings of her celebrity besties, including Ed Sheeran, Gigi Hadid, Gomez and Lively. While the crew’s evolved over the years, Swift’s devotion to her pals has not.

“In my 20s I found myself surrounded by girls who wanted to be my friend,” the “Shake It Off” musician explained in an essay for Elle in May 2019. “So I shouted it from the rooftops, posted pictures and celebrated my newfound acceptance into a sisterhood, without realizing that other people might still feel the way I did when I felt so alone.”

Taylor Swift Through the Years: From Nashville Upstart to Pop Superstar

She continued at the time, “Something about ‘we’re in our young 20s!’ hurls people together into groups that can feel like your chosen family. And maybe they will be for the rest of your life. Or maybe they’ll just be your comrades for an important phase, but not forever. It’s sad but sometimes when you grow, you outgrow relationships. You may leave behind friendships along the way, but you’ll always keep the memories.”

The feeling’s mutual for many of her pals, and the “A Year Without Rain” songstress previously gushed about Swift’s friendship.

“Taylor’s awesome! I love her. She’s amazing. I just talked to her today,” Gomez revealed during a September 2018 Instagram Live. “She’s literally like my big sister. I tell her everything. She’s so smart it freaks me out.”

The Canada native, for his part, even gushed about the “honor” for Swift to reveal his daughters’ names — James, 6, Inez, 5, and Betty, 2, whom he shares with Lively — in her music.

“The names are the names of our kids. We trust her implicitly. She’s very sensitive to any of that stuff. And obviously the song has nothing to do with our kids other than our kids’ names. But I mean, what an honor,” Reynolds said during an August SiriusXM interview. “We thought it was pretty damn amazing. We still do. You know, I still walk down the street and shake my head thinking, ‘I can’t believe that happened.’”