Federal police and organised crime investigators will be able to take over the online “dark web” accounts of criminals and terrorists and hack into their networks under new powers that passed Parliament on Wednesday.

The Australian Federal Police and Australian Criminal Intelligence Commission will also be able to modify or delete harmful content such as child exploitation material. For the first time, they will be able to use all these powers to penetrate the networks of criminals using domestic servers to operate on the dark web. 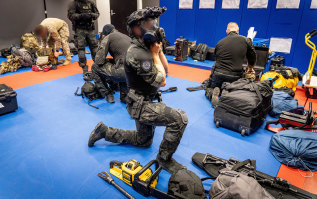 Police arrested 290 people in Operation Ironside, which involved the infiltration of a messaging app used by criminal networks.Credit:AFP

These powers will now be reviewed independently after three years, by Parliament after four years and end after five, and there are stronger protections for journalists and third parties under changes the government made in response to concerns raised by a cross party committee.

Home Affairs Minister Karen Andrews said she had worked through the committee’s recommendations in good faith and the amendments would ensure it was more likely warrants would be issued for more serious types of crime.

But she did not adopt the committee’s recommendation that warrants should be approved by either a Federal or Supreme Court judge, rather than a member of the Administrative Appeals Tribunal. The Greens attempted to insert this higher bar for warrants but were unsuccessful.

The Greens also argued the government had not properly made it clear why the new powers were needed, and that their scope was “disproportionately broad” compared to the threats they were directed at.

Ms Andrews said the changes would give law enforcement agencies tools that kept pace with technology.

She pointed to the arrests of 290 people in Operation Ironside, which involved Australian and American law enforcement cooperating to offer an encrypted messaging service to criminal networks.

“In Operation Ironside, ingenuity and world-class capability gave our law enforcement an edge. This bill is just one more step the government is taking to ensure our agencies maintain that edge,” she said.

“Under our changes the AFP will have more tools to pursue organised crime gangs to keep drugs off our street and out of our community, and those who commit the most heinous crimes against children.”

The Human Rights Law Centre accused the government of rushing the bill through Parliament, after it was debated and passed in the lower house on Tuesday then the Senate on Wednesday morning.

Kieran Pender, a senior lawyer at the centre, said the law created sweeping surveillance powers that would have a chilling effect on journalists and whistleblowers.

“Given the powers are unprecedented and extraordinarily intrusive, they should have been narrowed to what is strictly necessary and subject to robust safeguards,” he said.

“It is alarming that, instead of accepting [all of] the committee’s recommendations and allowing time for scrutiny of subsequent amendments, the Morrison government rushed these laws through Parliament in less than 24 hours.”

Security officials and law enforcement have been pushing for similar powers for years. They became the subject of controversy after police raided the home of then-News Corp journalist Annika Smethurst after she was leaked an earlier proposal for the laws.