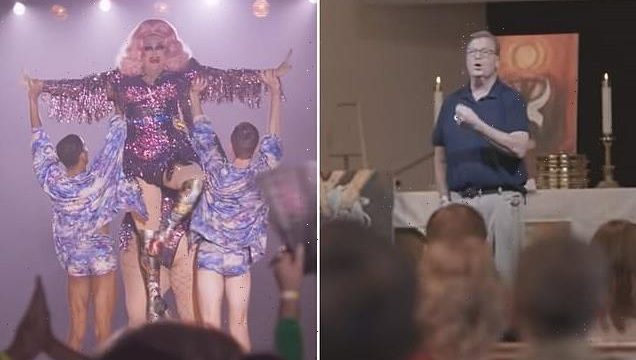 An Indiana pastor has allegedly been dismissed from his church after he dressed up in drag for the HBO docuseries We’re Here – because it caused too much ‘turmoil’ in their community.

Pastor Craig Duke, from Evansville, Indiana, recently appeared in an episode of the show, which follows ‘top drag entertainers Bob the Drag Queen, Eureka O’Hara, and Shangela Laquifa Wadley as they travel to small cities and towns across the country, transforming locals into fierce drag queens.’

Pastor Craig dressed up in drag to show his support for the LGBTQ+ community – including his daughter, who is pansexual – and said he hoped it would be a ‘bridge’ for the community and the church.

But according to a GoFundMe page set up on his behalf, United Methodist Church has since ‘relieved him of pastoral duties,’ and he and his wife will soon have to move out of their home that is owned by the church. 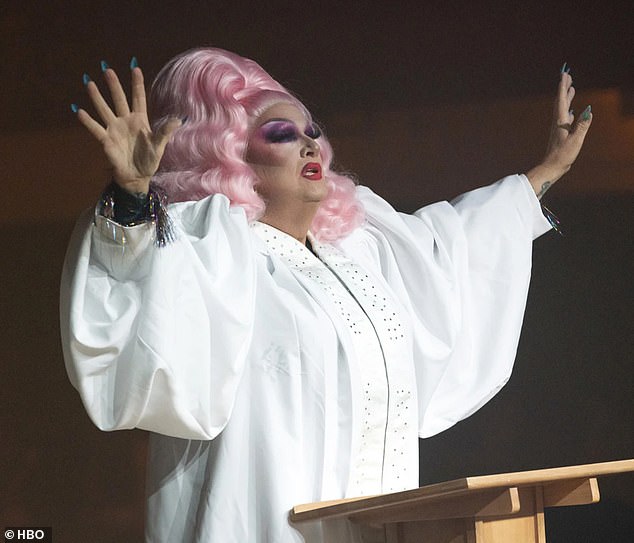 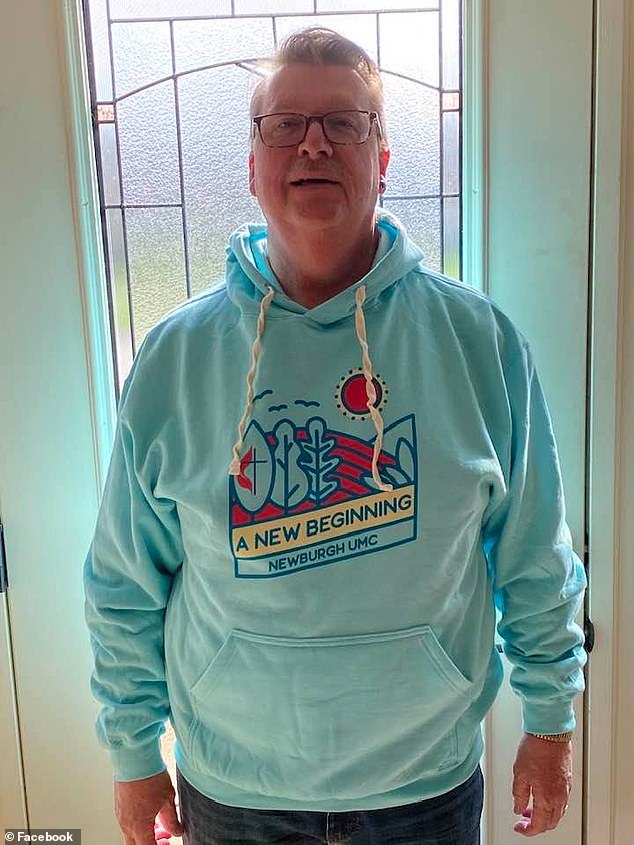 Pastor Craig Duke, from Evansville, Indiana, dressed up in drag to show his support for the LGBTQ+ community

In the episode, drag queen Eureka called Pastor Duke ‘dope and super fire’ after he dressed up in full drag and performed a dance number.

After it aired, the pastor told Religion News Service that it was ‘an incredibly wonderful, refreshing, deepening, and powerful spiritual’ experience.

But while Pastor Craig embraced inclusivity, it appears that his church no longer wanted to embrace him.

After the episode aired, he was ‘relieved him of pastoral duties’ so that he could ‘engage in a process of renewal, reflection, and recovery.’

‘Unfortunately, Craig’s participation in this show caused so much turmoil in the church that he was serving at the time, and it ultimately lead to him being “relieved of pastoral duties” at that church,’ the GoFundMe page reads.

That has meant that in addition to losing his income, he and his wife Linda are also losing their home, since which was owned by the church.

‘Craig will continue with a significantly reduced salary until no later than February 28. Obviously, this poses a major challenge to Craig and his family as they determine their next steps.

‘Pastor Craig considers himself to be a man of faith, a father, a husband, a social justice advocate, and ally for the LGBTQIA+ community.

‘Craig has a hope and has fought for a fully inclusive church that is welcoming to people of all races, all genders, and all sexual orientations.’ 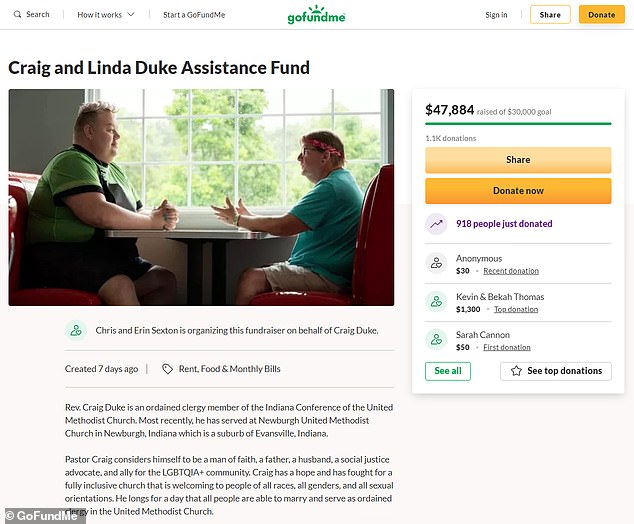 Many community members have spoken out on his behalf, and they even started a GoFundMe page in an attempt to help the Reverend – raising more than $47,000 in just over a week 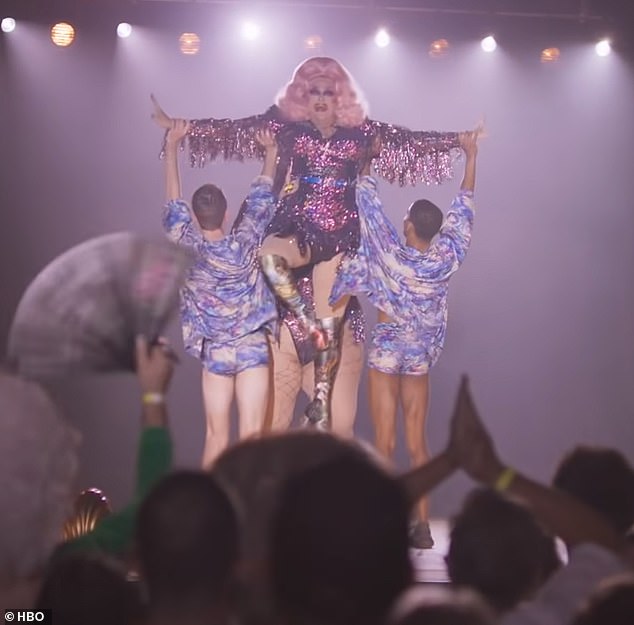 After the episode came out, the pastor told Religion News Service that it was ‘an incredibly wonderful, refreshing, deepening, and powerful spiritual’ experience

Commenters are infuriated by his dismissal and have shared their support online.

‘Pastor Craig doesn’t deserve this! SHAME on the ministry for their actions,’ one donor wrote. ‘This campaign should serve as proof that if religion doesn’t get with the times, it’ll be left in the dust.’

Another person added: ‘The state I live in disappoints me yet again. Do better, Indiana! Do better, Christianity! Always choose love.’

In an Instagram video, HBO star Shangela alsospoke out about the situation, bashing the church for ‘bullying’ the pastor.

‘The church bullied him because he is a person who believes in love, acceptance, faith, and inclusion.

‘He decided to step out on faith and appear in our show We’re Here and they let Pastor Craig go. That is wrong.

‘That’s not what our show is about. We’re here is about bringing people together, it’s about love and it’s about acceptance. 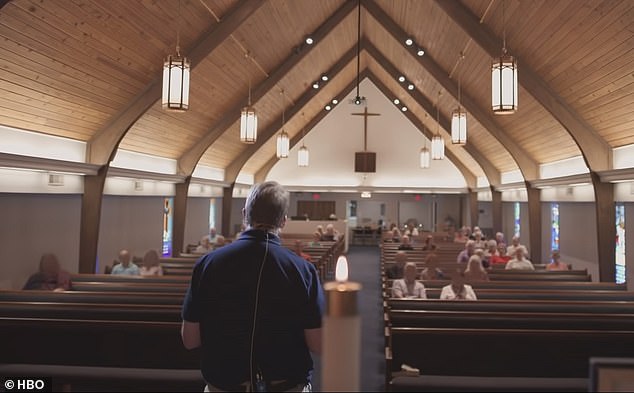 In an alleged letter from United Methodist Church, they said they let him go because he needed to ‘engage in a process of renewal, reflection, and recovery’ 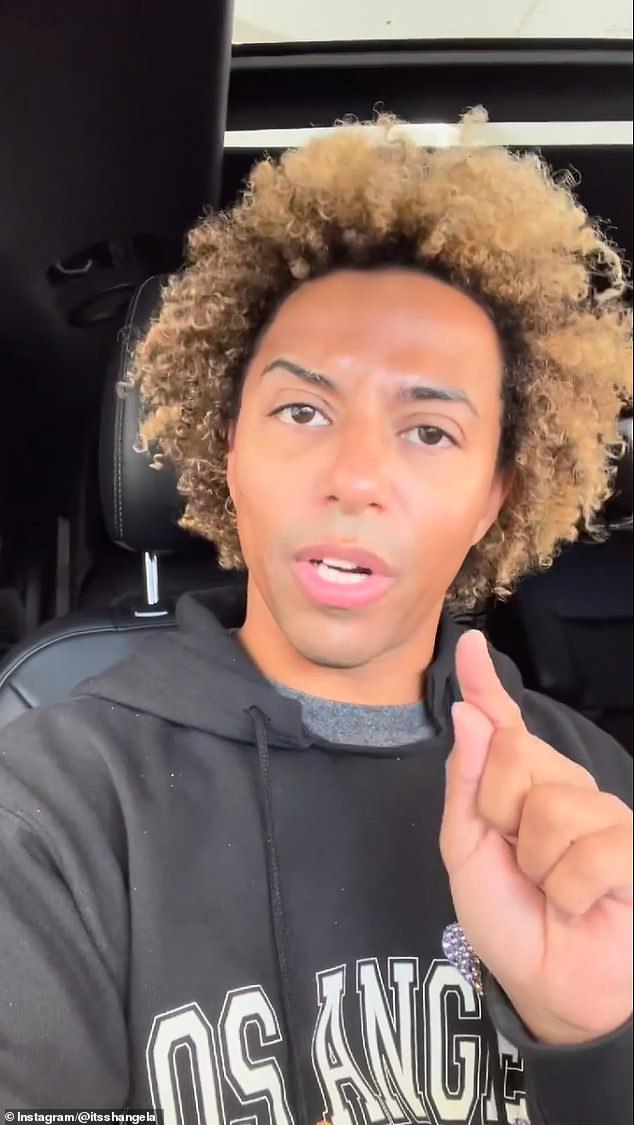 In an Instagram video, HBO star Shangela Laquifa Wadley spoke out about the situation, and he bashed the church for ‘bullying’ the pastor

‘Even we, the LGBTQ+ community – when we don’t agree with something we don’t go and get people fired from their jobs, but they’ve been doing it to us for years. And now they’re doing it to our allies as well.

‘People who stand up for the LGBTQ+ community are so important … When other people don’t take care of us, we will take care of each other.’

Queerty obtained a letter that was reportedly sent out by the church after the episode aired, and in it, the church said Pastor Craig needed to step away because he felt ‘unable to continue to serve in parish ministry at present.’

‘No single resolution will be satisfactory to all,’ superintendent Mitch Gieselman wrote in the letter.

‘In such a polarized climate, our main intent is to foster an environment in which both NUMC and the Duke family can move forward in grace.

‘In short, Craig has reached a place where he feels unable to continue to serve in parish ministry at present.

‘During his time of being relieved from pastoral duties, he will be engaging in a process of renewal, reflection, and recovery.’