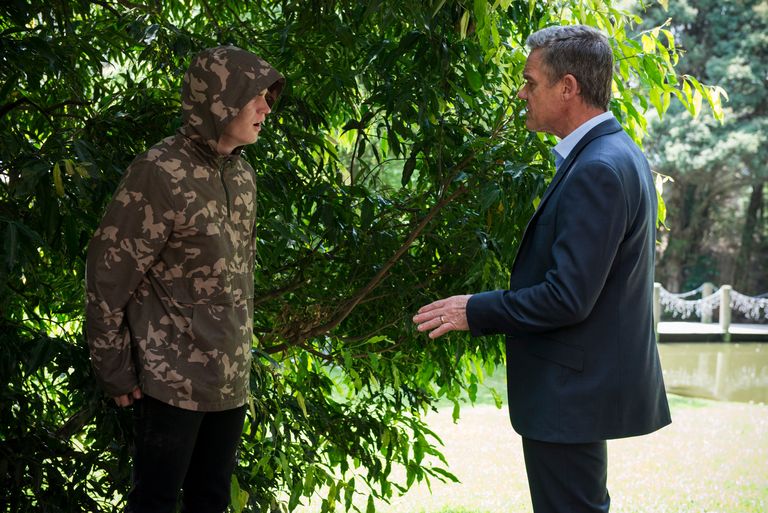 Brent’s (Texas Watterson) return to Neighbours was always going to be a troubled affair, but even Aaron (Matt Wilson) and David (Takaya Honda) couldn’t prepare themselves for this one.

He was discovered back in Erinsborough as a rough sleeper as things have not been going well for the poor lad, but after a tense turn of events, it looks like he’ll be staying for a little while until he’s back on the right path again.

This is not news to Nicolette’s (Charlotte Chimes) ears and she is desperately trying to accept having Brent around. But his annoying habits are getting to her and grating on her last nerve. She tries to see through it, reminding herself of everything he’s been through, but it’s proving tough. And then, just as she’s starting to come around, she stumbles across something. He’s not only annoying, he’s dangerous too.

He’s been secretly been harbouring a knife and Nic is absolutely horrified. How can she be living under the same roof as this thug? And what does she really know about Brent, how dark does it really get? She, perhaps foolhardily, decides to confront him.

Unfortunately for her, the timing couldn’t be worse. Paul Robinson (Stefan Dennis) watches as she comes face to face with Brent, and witnesses her handing the knife back to him. Paul can’t believe what he’s seeing, mostly in terms of his own luck. This shady exchange confirms everything he needed to know about this dodgy pair. He plans to use it against Nicolette to get her out of there for good.

He rushes straight to Aaron and David and blabs all about the scene he just witnessed. Nicolette is gone for sure. But karma bites Paul in the backside when Brent reveals the truth about what was going on. Why did he really have that knife?

Nicolette decides she and Brent need to put their heads together – they both hate Paul and want to see him gone. Are they about to conjure up a plan?

But Paul isn’t Brent’s only enemy. Hate is whelling up in Hendrix after Harlow forgave the tearaway and not her ex boyfriend. Hendrix might just be more dangerous than the knife-wielding teen as his jealousy overcomes him.