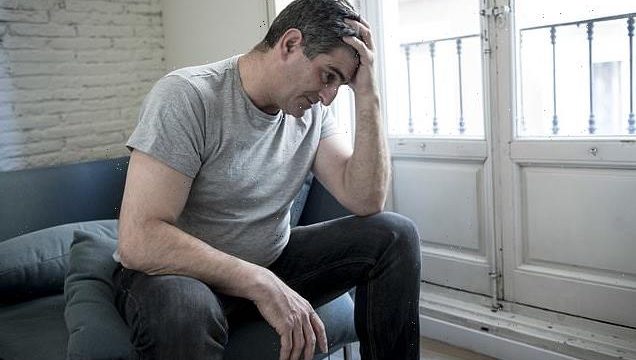 A man who hadn’t spoken to his father for the past 30 years has divided opinion after admitting that he’s considering not going to his funeral.

The British man took to Reddit and explained he has been in a ‘weird place’ since learning his father has died and that the funeral will be held just 90 minutes away.

He asked for advice and confessed he did not know if it would be difficult to listen to everyone say what a kind and generous person his father had been, when he did not benefit from any of those qualities. However he fears missing the funeral could be something he regrets for the rest of his life.

Some commenters advised him to stay at home and say goodbye to his father in his own way, while others argued he might regret not going to mourn. 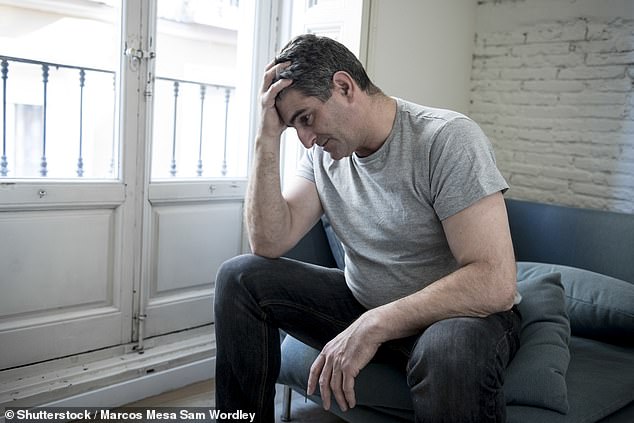 An anonymous man, who hasn’t spoken to his father for 30 years, has divided opinion about whether or not to attend his dad’s funeral (file image) 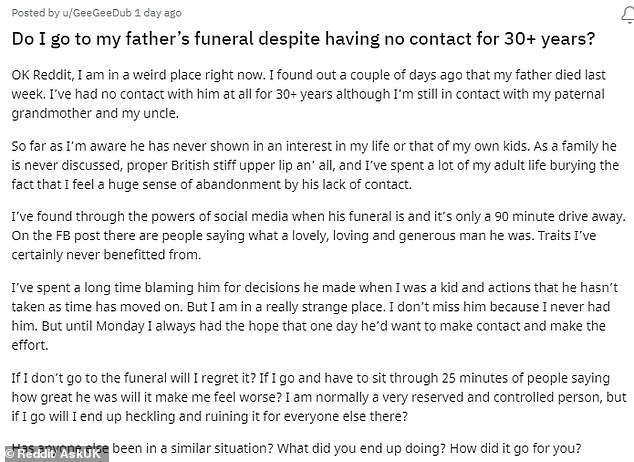 Posting on Reddit, the man explained his father hasn’t shown an interest in his life or that of his children

The man penned a lengthy post explaining that his father has never shown interest in his life or that of his children.

He wrote: ‘OK Reddit, I am in a weird place right now. I found out a couple of days ago that my father died last week. I’ve had no contact with him at all for 30+ years although I’m still in contact with my paternal grandmother and my uncle.

‘So far as I’m aware he has never shown in an interest in my life or that of my own kids. As a family he is never discussed, proper British stiff upper lip an’ all, and I’ve spent a lot of my adult life burying the fact that I feel a huge sense of abandonment by his lack of contact.

‘I’ve found through the powers of social media when his funeral is and it’s only a 90 minute drive away. On the FB post there are people saying what a lovely, loving and generous man he was. Traits I’ve certainly never benefitted from.

‘I’ve spent a long time blaming him for decisions he made when I was a kid and actions that he hasn’t taken as time has moved on. But I am in a really strange place. I don’t miss him because I never had him. But until Monday I always had the hope that one day he’d want to make contact and make the effort.

‘If I don’t go to the funeral will I regret it? If I go and have to sit through 25 minutes of people saying how great he was will it make me feel worse? I am normally a very reserved and controlled person, but if I go will I end up heckling and ruining it for everyone else there? Has anyone else been in a similar situation? What did you end up doing? How did it go for you?’

A flood of responses to the post urged the man not to go to the funeral, with one writing: ‘I’d say don’t go, you have your own life that you’ve made without him. You got to where you are without him, so what will hearing about him achieve for you?

‘You don’t have the emotional attachment as 30 years would quell that but if there’s free buffet then maybe.’

Another said: ‘You don’t need to go too a funeral to say goodbye especially if you was estranged. Going might make you feel awkward. I’d stay at home and say a quiet goodbye in private.’

Others warned the man he’s more likely to regret not going than if he does go to the funeral.

‘You’ve achieve a lot without his support and you should be proud of that. You shouldn’t concern yourself over what other people might think of him. If you think that other people would like you to be there and you are ok to be there then I would recommend you attend,’ one person wrote.

Another said: ‘Will there be relatives, even distant ones, that you’d be interested in seeing again and would probably be there? That would sway my decision. I think I would probably go, prepared to leave quickly if I felt like I needed to.’

A third added: ‘Yes. Do it for you, not him. You probably won’t regret going but you probably would regret not going.’