After years of #OscarsSoWhite controversy, a pandemic that ripped through America, Black Lives Matter protests and the Me Too and Time’s Up movements, the Academy Awards seem to have caught up with the times.

For the first time, two women have been nominated for best director: Chloe Zhao for Nomadland and Emerald Fennell for Promising Young Woman. They follow just five female directors who have been in contention, with just one winner in Kathryn Bigelow for The Hurt Locker, in more than 90 years. 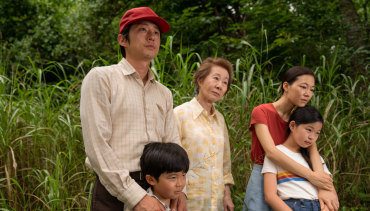 There is also the most diverse field of acting nominees in Oscars history this year, with nine actors of colour including the late Chadwick Boseman who plays an ambitious trumpeter in Ma Rainey’s Black Bottom. Riz Ahmed, who plays a rock drummer who goes deaf in Sound of Metal, is the first Muslim nominated as best lead actor.

And while Parasite won best picture and director with no acting nominees last year, Korean-born actors Steven Yeun and Youn Yuh-jung are both in contention for the touching immigrant family drama Minari.

That suggests the push to broaden the Academy of Motion Picture Arts and Sciences’ membership is having an impact – at least for now – because every acting nominee at least deserves the recognition. With the possible exception of an over-the-top Glenn Close in Hillbilly Elegy.

A year of the pandemic disrupting cinemas and boosting streaming services has delivered contenders that no longer reflect the Academy’s traditionally older, white male membership.

Australia is represented with visual effects nominations for the team behind the Queensland-shot Hollywood action comedy Love and Monsters – Matt Everitt, Genevieve Camilleri, Matt Sloan and Brian Cox – and Andrew Jackson for Tenet.

Zhao and Fennell both tell female-driven stories that resonate strongly in a troubled world.

The touchingly human Nomadland has Frances McDormand – a two-time Oscar winner who is nominated again for both acting and producing – as an itinerant worker cast adrift by the economic, social and spiritual decline of middle America.

And Fennell’s fiercely satirical Promising Young Woman has Carey Mulligan – who has her second Oscar nomination – as a troubled former medical student who wants revenge for a sexual assault on her best friend.

The nominations, announced by Priyanka Chopra Jonas and Nick Jonas in London, show how far these two women filmmakers in their thirties have come over the last year.

Zhao, 38, was barely known after directing her first two films: Songs My Brother Taught Me and The Rider. 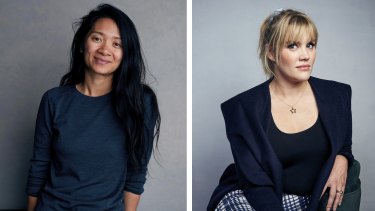 Nominated for best director at the Academy Awards: Chloé Zhao for Nomadland and Emerald Fennell for Promising Young Woman.Credit:AP

But after years of debate about the impact of China on Hollywood, the Beijing-born filmmaker is up for four Oscars for producing, directing, writing and editing Nomadland. She went to boarding school in London, high school in California then film school in New York.

While Chinese state news outlets were initially jubilant when Zhao became the first Asian woman to win best director at the Golden Globes this month, nationalists in the country quickly turned against her, pointing to a 2013 interview where she called her native country a place “where there are lies everywhere”.

Zhao was thrilled by the recognition. “I’m grateful to have gone on this journey with our talented team of filmmakers and to have met so many wonderful people who generously shared their stories with us,” she said.

Fennell, 35, wrote and executive produced season two of the hit TV series Killing Eve but has achieved something rare with her first film – three Oscar nominations for producing, directing and writing. And the British filmmaker can also act, playing Camilla Parker Bowles in the television series The Crown. 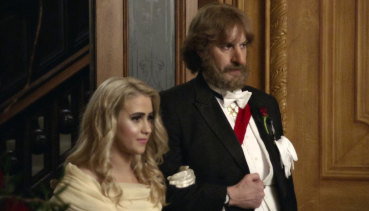 “I’m barely able to speak in coherent sentences after this unbelievable news,” Fennell said. “There have been so many exceptional female filmmakers this year, making such beautiful, inspiring, challenging, varied work, that I am truly honoured and grateful to be among their number.”

The groundbreaking duo are up for best direction against David Fincher (Mank), Lee Isaac Chung (Minari) and, surprisingly, Denmark’s Thomas Vinterberg (Another Round), with Aaron Sorkin (The Trial of the Chicago 7) unlucky to miss a nomination.

Sacha Baron Cohen, who lives in Sydney with actress wife Isla Fisher, is up for two Oscars – best adapted screenplay for the edgy political comedy Borat Subsequent Moviefilm and best supporting actor for playing activist Abbie Hoffman in the political courtroom drama The Trial of the Chicago 7.

“I’m incredibly humbled and grateful to the Academy for both nominations!,” he said. “To the team of Trial of the Chicago 7 – acting is a team sport, and I would not be in this position if it were not for the brilliance of Aaron Sorkin and the incredibly talented actors and crew that he surrounded us with and who lifted us up every day.”

Mank, the inventive telling of a nostalgic Hollywood story about Herman Mankiewicz writing Citizen Kane, leads the nominations with 10. It contributed to Netflix’s dominant 35 nominations – up from 24 last year.

But Nomadland’s success during the disrupted and delayed Hollywood awards season makes it favourite to win best picture. 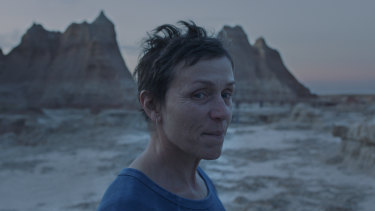 They are up against The Trial of the Chicago 7, Sound of Metal, The Father, Judas and the Black Messiah, Minari and Promising Young Woman.

While the Golden Globes are a sideshow, the Oscars still matter for the attention they give to the best of cinema – the compelling movies engaging with social and political issues that would struggle for attention amid the blockbusters in a more normal movie-going year.

But whether they can do better at drawing television viewers than the flagging Golden Globes and Grammys on April 25 is another question.

So who was unlucky?