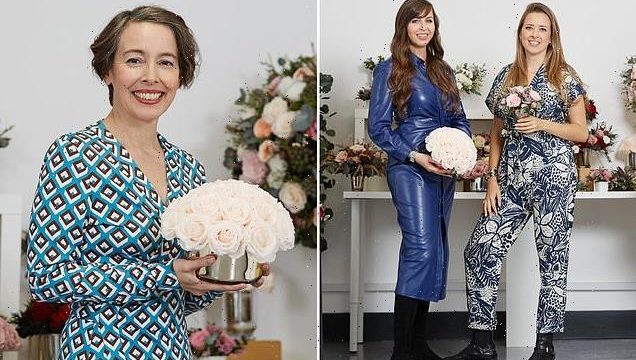 Fresh flowers that last a whole year? It sounds impossible, but one firm has pioneered… Blooming miracle bouquets

The arrangement of roses I’m holding is exquisite. The flowers are in full bloom and each petal is a warm, velvety pink.

The roses are mingled with foliage and I detect a faint scent of eucalyptus. This would make an ideal bridal posy — vibrant, elegant and, I imagine, just picked.

These flowers do indeed boast a delicate, other-worldly beauty, thanks to their having undergone a unique preservation process, which keeps them looking fresh for up to a year. 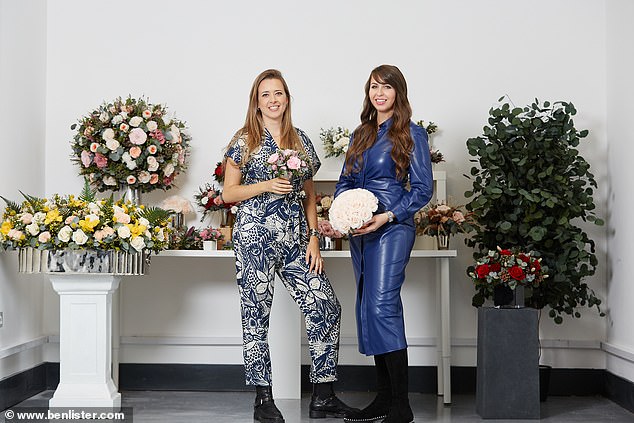 Gently I touch a petal. The only clue that this isn’t your normal wilt-in-days bloom is that it feels slightly firmer than you’d expect, and it isn’t as cool and moist to the touch.

But otherwise, it’s hard to tell. And unlike freeze-dried flowers, which always appear faded and, well, dead, these long-life roses are vivid and juicy-looking.

And as long as you don’t fiddle with them, or put them in a steamy bathroom, they’ll stay that way for 12 months — or two years at a push (after which they become drier and fade in colour).

‘We just say a year, because it sets expectations,’ says Erni.

Perfect flowers that stay perfect for 12 months? No stem trimming. No watering (in fact they must not be — key to preserving their look is removal of their water content). No dropping stalks. No browning or falling petals.

No wonder the idea has blossomed in the two-and-a-half years since its launch by business and life partners Erni, 34, and Kathryn Popplestone, 36.

The pandemic was ruinous for the cut-flower trade, with artificial blooms springing up in their place. This was not helped by the trend for ‘flower walls’ — towering arcs of fake flowers outside shops and restaurants to provide a glamorous backdrop for selfies. But could this scientific breakthrough see the return of real flowers?

Initially, Erni and Kathryn, both of whom have science backgrounds, acquired clients on London’s Bond Street. Erni went cold-calling in winter, clutching a fresh-as-a-daisy, six-month-old bouquet, asking to speak to managers.

Their business has since grown 400 per cent year-on-year, with a global, largely high-end clientele, including British model Rosie Huntington-Whiteley. 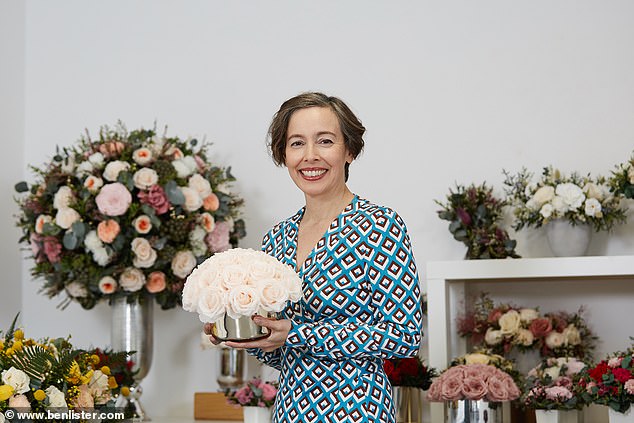 A single rose in a cubed pot is £35, or three roses arranged with sprigs of eucalyptus in a porcelain vase costs £95. Pictured: Anna Maxted visiting Ethereal Blooms

From a practical viewpoint, corporations, luxury yachts and hotels love that the flowers still look gorgeous a year on, and they’re economical: though they might seem expensive at first (a single rose in a cubed pot is £35, or three roses arranged with sprigs of eucalyptus in a porcelain vase costs £95), really they’re a bargain if you usually order a high volume of fresh blooms every four days.

They also appeal to anyone who loves the treat of having fresh flowers at home.

Most customers — in London, the U.S. and Europe — order online.

Despite the luxury price point, notes Erni, because of the longevity of the flowers, a small bouquet works out at the price of one coffee per week for a year.

However, for those with deeper pockets, Ethereal Blooms’ collection at Harrods provides a taste of what they can offer.

Each arrangement is named after a female icon, and Madonna (a coffee table bouquet of roses in peach, pink, red, white, or champagne) costs a Material Girl-worthy £1,200.

Cleopatra (gardenias, large standard roses and English garden roses in pale pinks and purples, with eucalyptus and foliage in a marbled vase) starts at a queenly £720.

If you want to add fresh glamour to your hotel lobby or boardroom, it comes in ‘supreme’ size — for the royal price of £3,100. 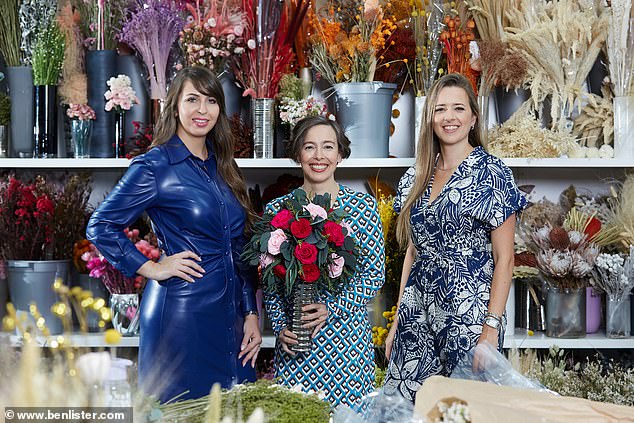 Kathryn explained the life of the flowers are lengthened by placing them in a preservation solution of alcohol and other secret ingredients. Pictured left to right: Kathryn, Anna Maxted and Erni

So how does it work? ‘Foliage and filler flowers are placed in a preservation solution of alcohol, and a few other secret ingredients,’ says Kathryn.

‘They stand upright in it as if in a vase. We leave them in the sunlight so they can still photosynthesise.

‘The liquid is taken up through the stem, and that replaces the water content, and that’s how they become preserved.’

This takes ten days. No harsh chemicals are used, and a few plants, such as lavender and rosemary, retain a little scent (though most flowers don’t, which — while a boon to allergy sufferers — seems a bit of a shame to me).

‘With the larger-headed flowers, like roses, orchids, carnations, it’s a two-step process,’ adds Kathryn. ‘They’re submerged in the solution, that removes the water content. Then they’re placed in a second solution and that adds back natural oils, so the flower looks and feels supple and fresh, and won’t wither, go brown or die. It freezes it in that state.’ This takes four weeks.

kathryn and Erni learned the basic preservation process in Asia. ‘We can’t claim to have created it,’ says Kathryn, but they’ve adapted the formulas to achieve the natural and fresh-looking result.

‘A lot of work we do is with yachts, as they have issues with fresh flowers on board,’ says Erni.

Roses feature prominently, with neutral shades especially popular as they blend in with, rather than dominate, decor. 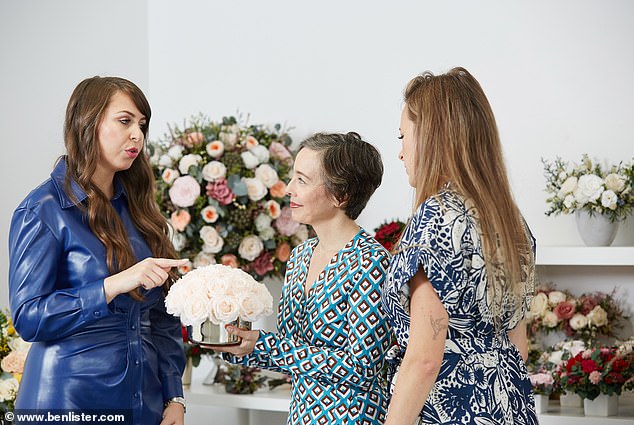 Kathryn said even if you keep your preserved blooms for only months rather than a whole year, this would still be more cost effective and less wasteful than buying fresh each week. Pictured left to right: Kathryn, Anna and Erni

Erni says: ‘We tend to focus on the slightly larger-headed flowers — roses, chrysanthemums, orchids, carnations — because those are the types people usually want as part of their interiors for longer.

‘We do some English wildflower bouquets, but people like to buy those more seasonally.’

Indeed, part of what makes fresh flowers feel special is their impermanence — and I do wonder whether that element of their appeal might be lost if one bouquet, no matter how beauteous, sat on my mantelpiece for a year.

Kathryn says some clients move their arrangements around the house, and points out that even if you keep your preserved blooms for only months rather than a whole year, this would still be more cost effective and less wasteful than buying fresh each week.

As our nation becomes increasingly eco-conscious, their venture is well-timed. Personally, too, they were lucky — falling in love after meeting through a mutual friend on holiday in Bali.

They live in Central London with two small dogs and a cat, all of whom accompany them to the office which — with shelves of preserved flowers, ferns, grasses, buds and berries — is a riot of colour.

Plenty of clients order fresh-cut bouquets from Ethereal Blooms, too, notes Kathryn. All the same, she adds, in terms of sustainability, ‘This is the future of flowers.’

Forever flowers . . . Best of the Rest 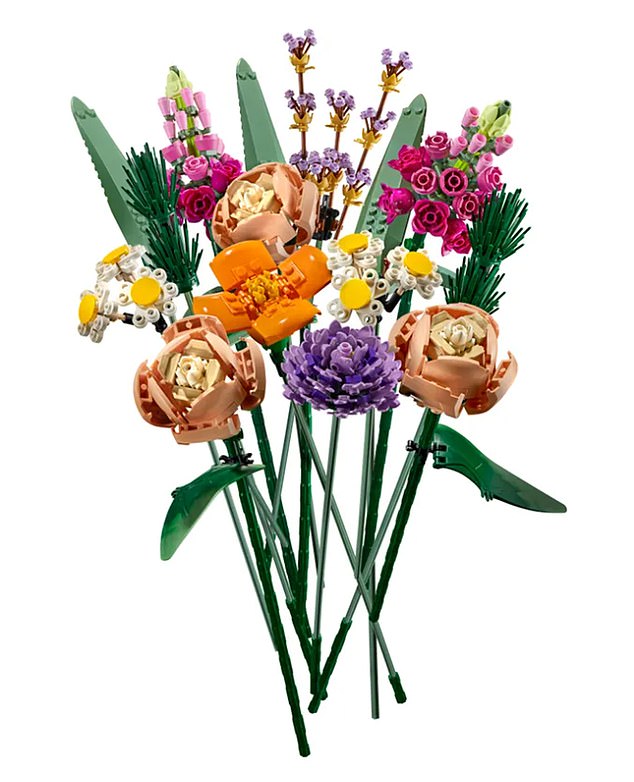 Jenny Wood gives verdict on a selection of other forever flowers, including Lego flower bouquet (pictured)

For those in touch with their inner child, this surprisingly fun gift requires the recipient carefully to assemble their own bunch of blooms from 756 tiny pieces of plastic. Once completed, the 15 stems look very impressive. No water required — just the odd go-over with a duster.

PETAL POWER: Decorative flowers and an afternoon of entertainment in one. 4/5 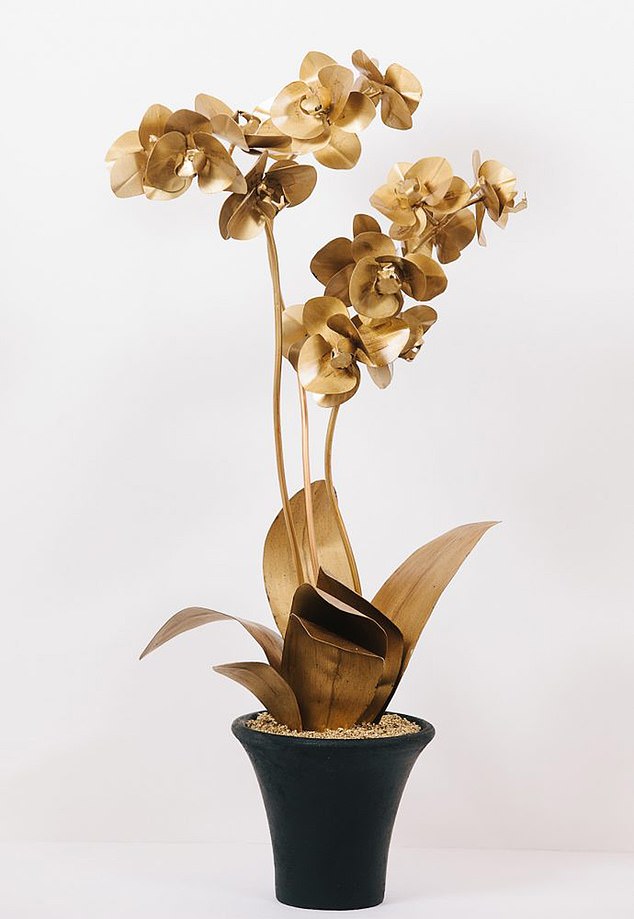 Created by American artist, Tommy Mitchell, these metallic blooms are handmade from wafer-thin sheets of brass, copper and steel.

Gilded and painted, they are detailed enough to look real but will never die — just as well, given the price tag (and you’ll have to pay to have them shipped from America).

PETAL POWER: Beautiful and intricate, but the real thing is far cheaper. 3/5 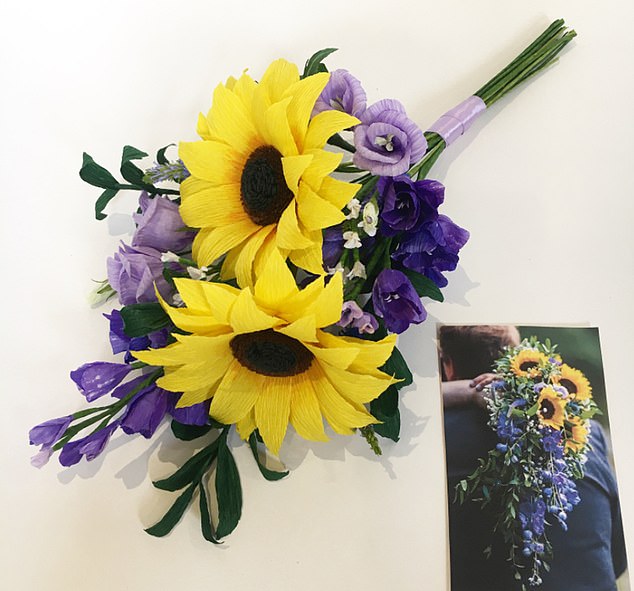 What if you could keep your wedding bouquet for ever? Designed to look just like the real thing, these painstakingly hand-crafted paper flowers make the perfect first anniversary gift.

PETAL POWER: Stunning, like individual works of art. It’s hard to tell them from the real thing.5/5 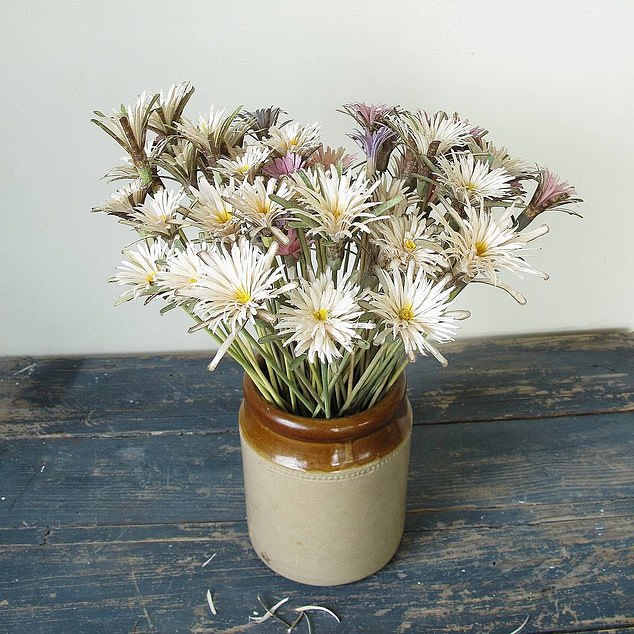 Jenny said Handmade wooden flowers (pictured) are kinder to the environment, and would make a stylish and charming gesture

These are made from coppiced hazel and hand-painted ‘to replicate meadow colours’ before being wrapped in hessian. Beautiful, unusual and bound to earn you brownie points for being green.

PETAL POWER: Kinder to the environment, they would make a stylish and charming gesture. 5/5