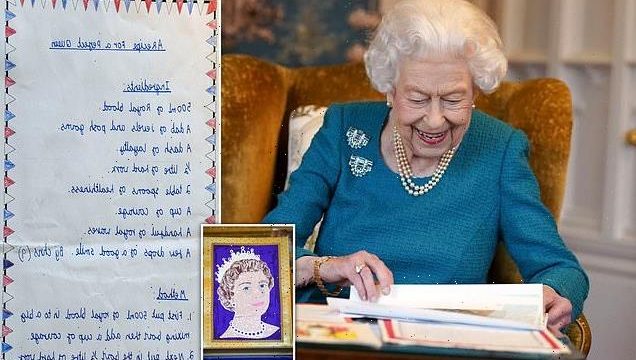 ‘A dab of jewels, posh gowns, a cup of courage… and a few drops of a good smile!’ Adorable ‘recipe for the perfect Queen’ by a young royal fan in honour of the Jubilee re-emerges online

Adorable cards sent from children to The Queen to celebrate her Platinum Jubilee have resurfaced online after the beloved monarch’s death.

The images resurfaced today after they were shared by the Royal Trust to show ‘a small selection of the thousands of cards, often homemade, that The Queen received each year’.

A nine-year-old called Chris wrote the monarch a letter describing the ‘recipe for a perfect Queen’ that included ‘a dab of jewels and posh gowns’ and ‘a few drops of a good smile’.

At the time that particular card made Her Majesty laugh and she remarked: ‘That’s quite fun, isn’t it?’ 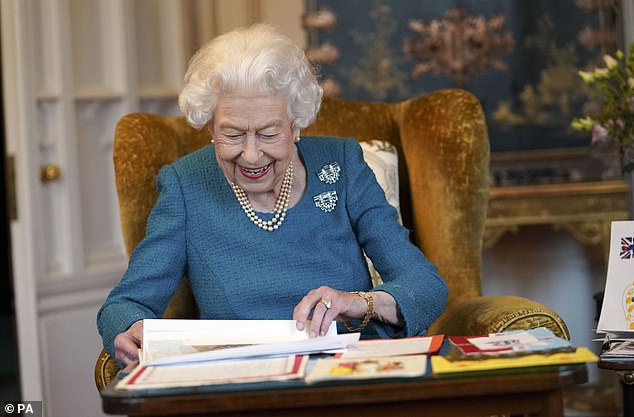 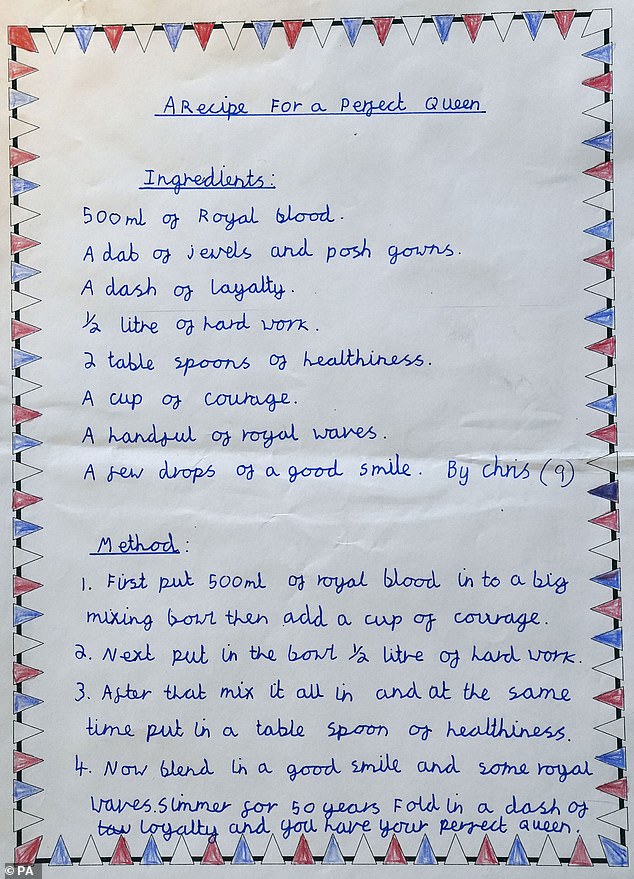 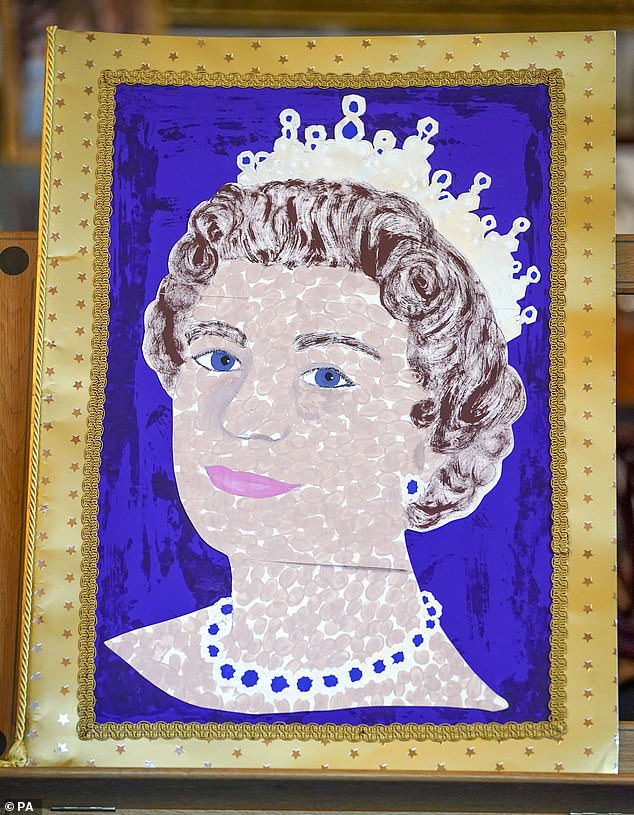 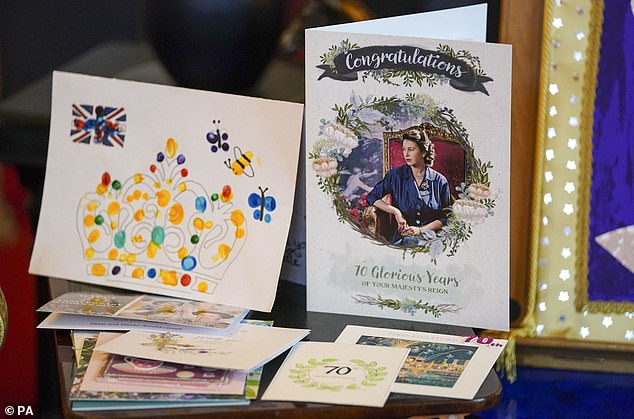 Often cards sent to the Queen were homemade, while others drew on portraits of Her Majesty from her youth 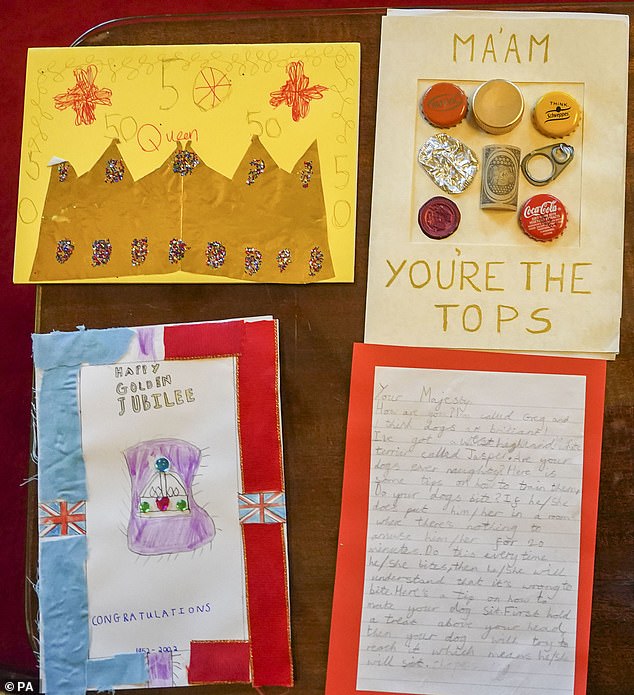 One person created  card saying ‘Ma’am, you’re the tops’ attached with the tops of a series of bottles and cans

The Queen celebrated her Platinum Jubilee this year to make 70 years on the throne, making her Britain’s longest-reigning monarch.

She passed away peacefully aged 96 at Balmoral Castle, on September 8.

The Queen was shown almost every letter she was sent by one of her private secretaries each day.

She took a ‘keen interest in the letters’, the Royal Household said.

The Royal Household has kept a selection of letters Her Majesty received.

As she viewed memorabilia from her reign earlier this year she was joined by Candy, her pet dorgi – a breed invented by the Queen that is a cross between a corgi and a dachshund. 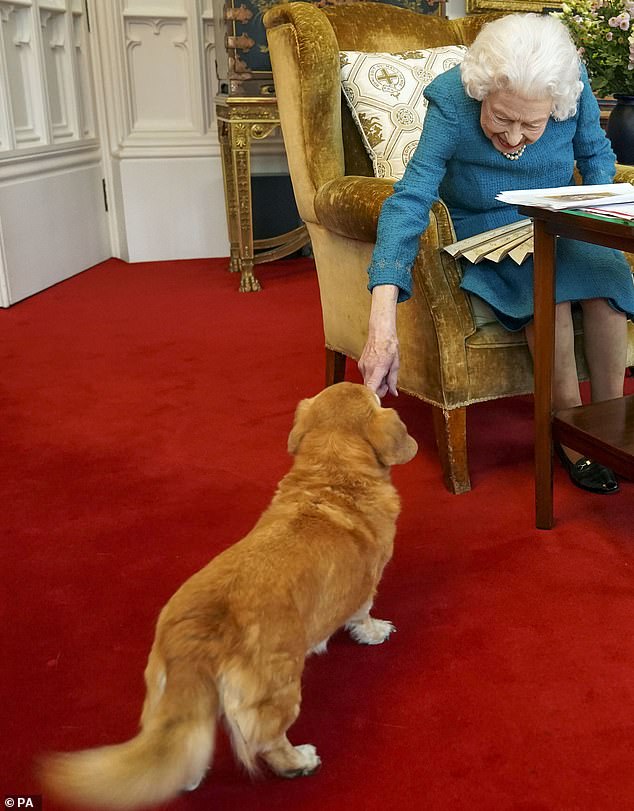 As she viewed memorabilia from her reign earlier this year she was joined by Candy, her pet dorgi – a breed invented by the Queen that is a cross between a corgi and a dachshund 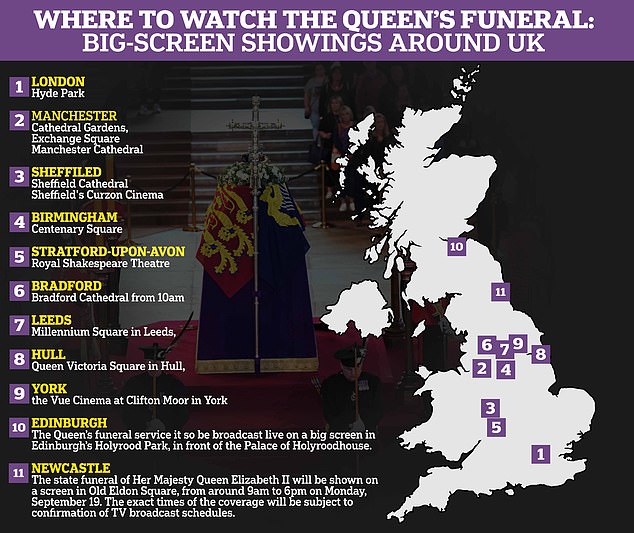 The monarch wore aquamarine and diamond clip brooches, worn separately in a diagonal setting on her turquoise dress.

The jewels were an 18th birthday present from her beloved ‘Papa’, George VI, in April 1944

Since her Accession Day also marked the death of her father George VI she often spent it in private with her family.

Her Majesty is currently laying-in-state at Westminster Hall before her funeral on Monday.

The King and the Queen’s three other children will hold a 15-minute vigil at her coffin on Friday night before her state funeral on Monday, which will end with a two-minute national silence in a ‘fitting tribute to an extraordinary reign’, Buckingham Palace said today. 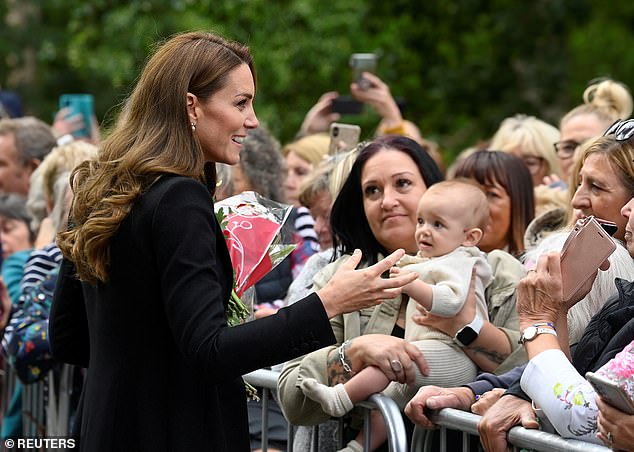 Members of the Royal Family have been meeting crowds around the country today. Pictured: A small baby looks on with a look of concern as the Princess of Wales chats with people in the crowd at Sandringham 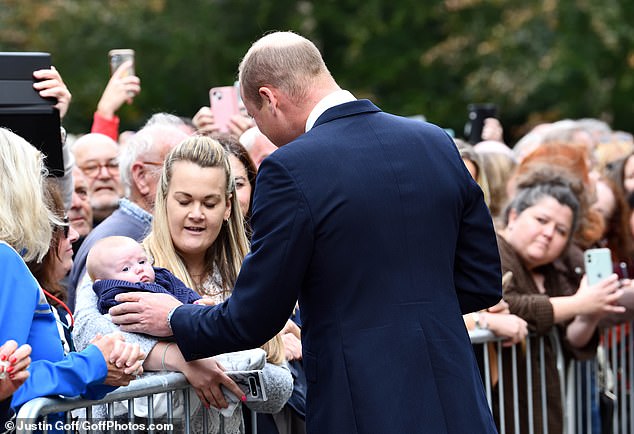 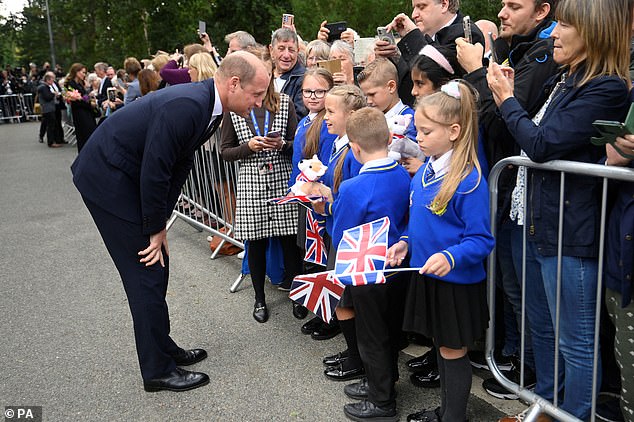 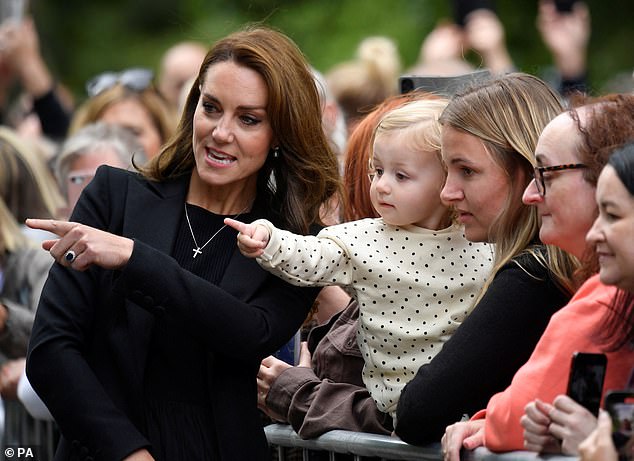 The ever-elegant Princess of Wales points off into the distance, alongside a young girl, as she met with members of the public who waited outside the royal residence of Sandringham today

In Manchester, Sophie, the Countess of Wessex , met Josh, a young mourner who had gathered in Manchester with his mother, Sue

Sophie, Countess of Wessex, embraces young Josh, as she views floral tributes in St Ann’s Square, during a visit to Manchester

Charles and the Royal Family has said they ‘wish to send their sincere gratitude for the messages of condolence received from around the world’, adding they have been ‘deeply moved by the global response and affection shown for the Queen as people join them in mourning the loss of Her Majesty’.

The Queen’s state funeral will ‘unite people across the globe and resonate with people of all faiths’, according to The Earl Marshal, the Duke of Norfolk, the man in charge of the historic occasion.

He said that it was ‘both humbling and daunting’ to have the ‘honour and great responsibility’ to run an event that will be watched by billions of people around the globe. He said: ‘The events of recent days are a reminder of the strength of our Constitution, a system of government, which in so many ways is the envy of the world’.