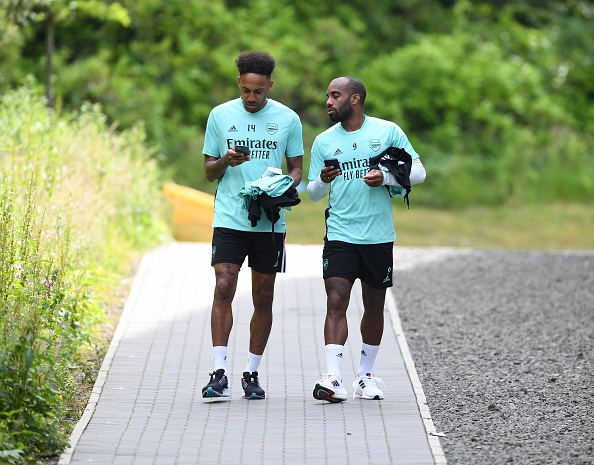 Barcelona are considering moves for Arsenal strikers Pierre-Emerick Aubameyang and Alexandre Lacazette with the Gunners prepared to listen to swap offers for either player.

Barcelona will still attempt to bring in more firepower before the transfer window closes however and while any incoming business is likely to depend on the sale of Danish striker Martin Braithwaite, both Aubameyang and Lacazette are among a list of targets.

Sport report that both players would be keen on the move to the Camo Nou with Arsenal willing to consider a swap deal for either of the two.

Given their dire financial position, Barcelona are unable to offer a fee for either Aubameyang or Lacazette.

It also remains to be seen if Mikel Arteta is interested in any available members of the Barcelona squad.

Philippe Coutinho is among the high-earners Barcelona are trying to move on this summer while the club are also looking to secure loan exits for Miralem Pjanic and Samuel Umtiti.

Both Aubameyang and Lacazette missed Arsenal’s opening day defeat to Brentford through illness with the former’s decline representing a major worry for Arteta.

The Times have reported Arsenal are ready to listen to offers for the 32-year-old, who signed a new long-term contract with the club just last summer.

For more stories like this, check our sport page