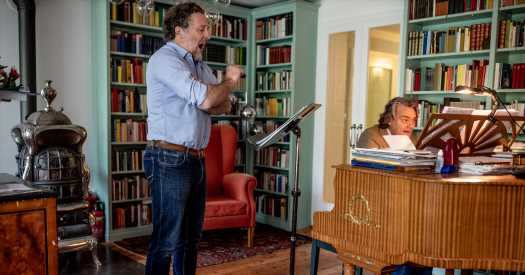 Back in 1988, it was hearing the lieder of Robert Schumann that convinced Christian Gerhaher, then a philosophy student in Munich, to ask a pianist he knew from school, Gerold Huber, whether they might start playing some songs together.

Three decades later, Gerhaher and Huber have long since become the greatest partnership in singing, and they come full circle this month with the release of an 11-disc box set of Schumann on Sony. As its cover announces, it contains “All the Songs.”

“Gerold and I have worked on singing Schumann for 33 years,” Gerhaher, 52, said in an interview. “He composed nearly 300 songs, but what is astonishing is that every song is amazing, a revelation of possibilities, of thoughts, of beauty. There is maybe only one song I don’t like so much.” (It’s “Der Handschuh.”)

Schumann has had an uncertain presence in the art song repertoire. While cycles like “Dichterliebe” are touchstones, much of his output remains overlooked. Gerhaher can cite only two prior attempts at anything comparable to a complete set, neither of them as cohesive as his new release.

The baritone Dietrich Fischer-Dieskau, among the leading lieder advocates of the 20th century, taped about half the songs in the 1970s. Graham Johnson, an accompanist with encyclopedic tastes, compiled a very full set on Hyperion from 1996 to 2009. But he split the songs among different vocalists.

That makes Gerhaher the first singer to finish a complete survey of his own (albeit with the help of colleagues in works written for the female voice or for groups). Huber is at the piano throughout, and the goal is finally to give Schumann his due as a connoisseur of lyrics — according to Gerhaher, “one of the best-read composers that there has ever been.”

Gerhaher believes that Schumann took a far more literary approach to songs than, say, Schubert — an approach that was intended “to make these poems even more complicated than they are.” He did this not just in introducing tensions between text and music (and vocalist and pianist), but also by writing almost exclusively in cycles, combining disparate poems into coherent sets.

That has always been obvious with cycles like the Eichendorff “Liederkreis” (Op. 39), or the “Kerner Lieder” (Op. 35). But it is true, too, Gerhaher said, of less monumental groupings with innocuous titles like “Three Songs” (Op. 83) or “Six Songs” (Op. 107) — their texts (sometimes by the same poet, sometimes drawn from different ones) freighted with deeper, often darker meaning when set together.

“He doesn’t want to finish thinking about a poem,” Gerhaher said. “By putting them into music and then combining them into cycles, he stretches the semantic nature of a poem, in order to create something very different and new. This is what I love.”

Schumann composed his songs in two spells. The first period, from 1840, has been seen as the epitome of Romanticism. The second has been heard skeptically, if at all, but Gerhaher has increasingly found it the richer. Schumann wrote these songs from 1849 to 1852, not long before he jumped into the Rhine in 1854 and died in a psychiatric asylum two years later. Like most of his later works, the late songs have been lesser to some ears, as antiquated prejudices about mental health have led to misunderstandings of their experimental tone.

With that in mind, Gerhaher chose five late songs to introduce his new recording. Here are edited excerpts from his comments.

In Op. 96, you have five songs. Two and four are very disturbing, about human sorrow. The third, in the middle, is an August von Platen poem that explains that words can’t convey what they try to convey. These three describe humanity’s horrible situation: being thrown into the world and not even being able to talk to each other properly.

There is another “Schneeglöckchen” (“Snowdrops”) in the “Liederalbum für die Jügend” (Op. 79), where it means something nice, because it’s a sign of the end of winter. But the anonymous poem Schumann sets here in Op. 96 is harder to understand. A voice comes to a snowdrop and says, you have to leave, a storm is coming. But why? It’s the end of winter; the flower has nothing to fear. The voice answers that the snowdrop’s “Liverei” — its uniform — is white, with a green trim.

Why does it talk about a uniform? I looked through some uniform books, and found a similar one for a cavalry called the Scheither Corps, part of the Hanover regiment in the Seven Years’ War. There was a battle at Moys, near Görlitz, where the corps was defeated by Austria. There was one snowdrop rider left hurt, who couldn’t get home. And in the poem the voice says you have to go home. This is so disturbing, even if I can’t prove the connection.

This last song, “Heaven and Earth,” is a resolution for the Op. 96 cycle. The first song is Goethe’s “Nachtlied”; it starts with the two nouns “Gipfel” (“hills”) and “Wipfel” (“treetops”). This last one, by Wilfried von der Neun, starts with the reverse, with “Wipfel” then “Gipfel.” You are confronted with these opposites, then you are confronted with heaven, and you see that these oppositions are not important anymore; they come together. It reminds me of the medieval German philosopher Nicholas von Kues, who wrote about the “coincidentia oppositorum” — the falling together of opposites.

At first you can’t understand this cycle at all. You see number one, “Die Tochter Jephtas” (“Jephthah’s Daughter”), and number three, “Dem Helden” (“To the Hero”). All three are Byron texts. What does it mean?

In 1847, Fanny Mendelssohn died, and Felix Mendelssohn shortly after, and Schumann wrote some Byron into his book of poems. The first song is a memorial to Fanny. Jephthah’s daughter was this warrior without a name; she fought for her father, the king, but she didn’t get a name. This was Fanny’s fate: She was a composer, but she didn’t make a name as one. “To the Hero” is about Felix’s role in these years, especially to Schumann: the splendid hero of music.

In the middle is “To the Moon.” It says, look, moon, you are kind of a star, but you are a cold star, because you reflect warm light from the sun — you are only a memory, sad, cold, hard memory. This is how Schumann combined the deaths of his two friends.

This cycle so abstract. You have three songs, and they represent three ways to set a poem. The first song, “Resignation,” is the most advanced and through-composed; the second is a varied strophic song; the third, “Der Einsiedler” (“The Hermit”), is a perfect strophic song. In “The Flower of Resignation,” you have five strophes, and in the middle of the third strophe, you see this word “Liebesschalen” (literally “love bowls”). This is the center of the middle strophe of these three songs, the creation of a third person by a couple. It can’t be an ongoing error that Schumann had this maniacal tendency to conceive of combinations.

Op. 90 is maybe my favorite cycle overall. There is a downward spiral. It’s very dark, about accepting the vanity of the world and the sadness of being alone. We start with a framing song again, the song of a blacksmith who is helping Faust on his travels, naïvely unaware that Faust is seducing his wife. In the middle you have two song couples, which are examples of losing faith in life. The fourth is a wonderful song about love vanishing and death taking over.

Then Schumann added this “Requiem” as a requiem for the poet, Nikolaus Lenau, whom he thought was dead but in fact only died around the day of the first performance of these songs. You have these illusions of eternity, of never-ending life. It’s so full of feeling, a coming-together of spirituality and sensuality.