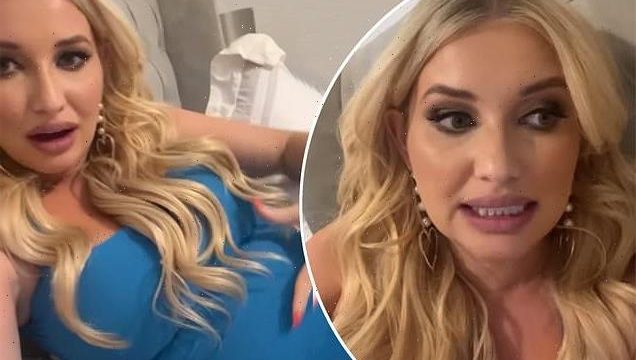 Amy Hart has revealed she was warned not to get pregnant as doctors are still undergoing investigations into abnormal cells in her cervix.

The Love Island star, 30, revealed this week that she is expecting her first child with boyfriend Sam Rason, 33, and conceived naturally months after she froze her eggs amid ongoing fertility fears.

Yet Amy candidly revealed on Monday evening that she will need to be monitored throughout her pregnancy as she went against doctors advice to not get pregnant while they examine the results of her troubling smear test. 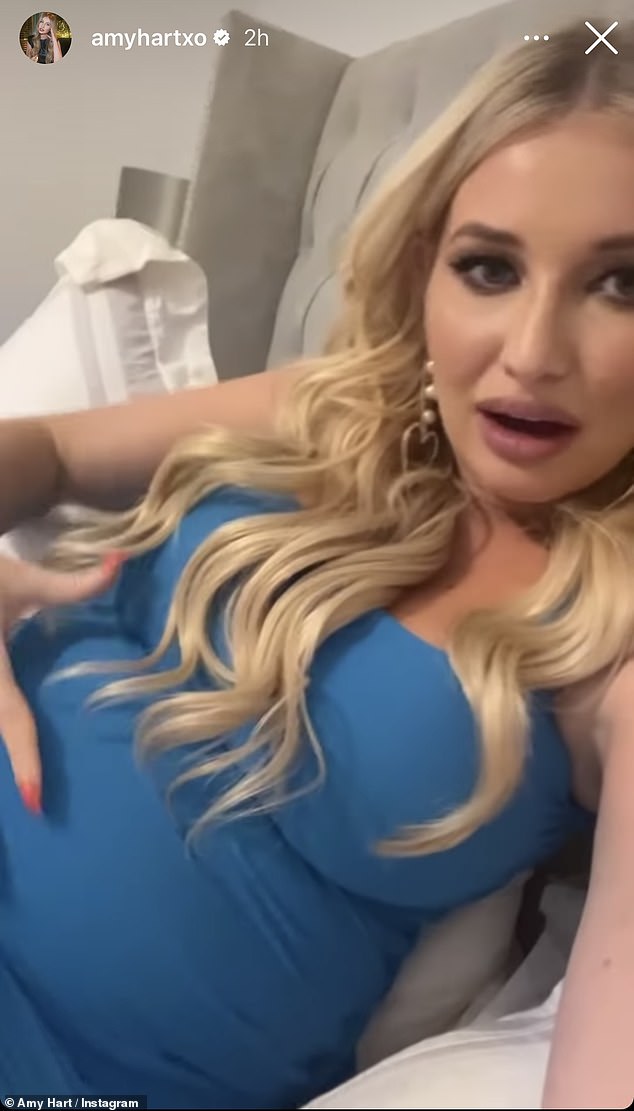 Scary: Amy Hart has revealed in an Instagram Story on Monday that she was warned not to get pregnant as doctors are still undergoing investigations into abnormal cells in her cervix

Amy was initially told she had an HPV positive diagnosis in May and had already undergone an ‘uncomfortable’ colposcopy to investigate her ‘dodgy cells’ in June.

Speaking on her Instagram Stories, Amy revealed she was subsequently told she may need abnormalities in her cervix taken out after a nurse warned her at the time that they were ‘looking like high grade cells.’

Amy then clarified that there are some obstacles to overcome as she will have to undergo further tests to check for precancerous cells. 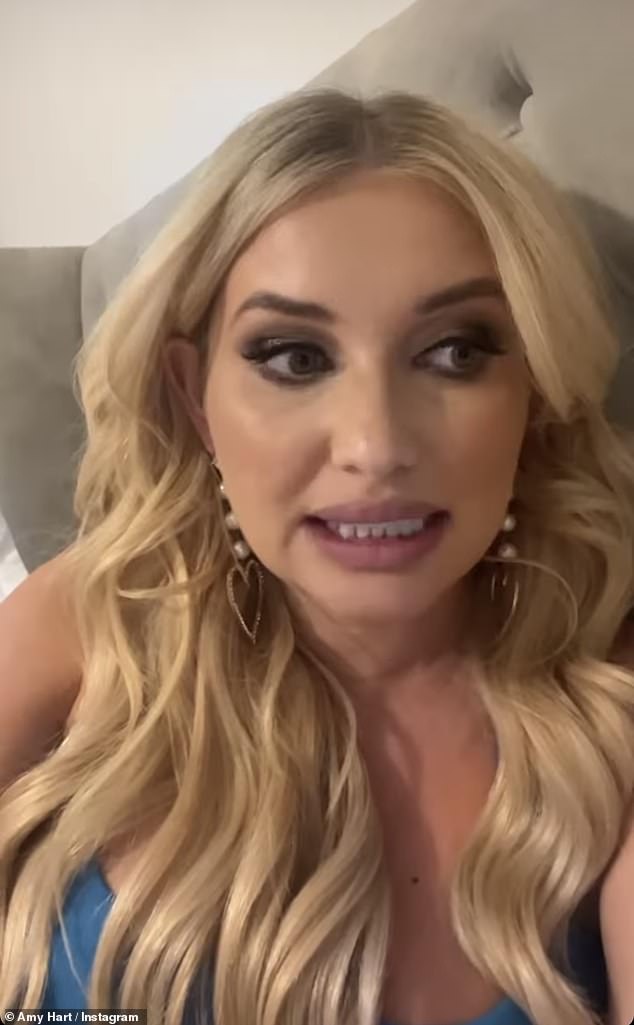 Concerning: Amy was initially told she had an HPV positive diagnosis in May and had already undergone an ‘uncomfortable’ colposcopy to investigate her ‘dodgy cells’ in June

After confessing she is now under the special attention of a consultant, she admitted it was ‘quite scary’.

What is egg freezing?

Freezing allows women to store their eggs at a young age so they can be used in IVF when they want a family.

This gives them a greater chance of conceiving as the quality of the eggs they produce as they get older deteriorates.

But so far fewer than a fifth have a baby after using their frozen eggs, according to the fertility watchdog, the Human Fertilisation and Embryology Authority (HFEA).

She told her followers: ‘We were supposed to talk about this on Loose Women but we all got carried away. So HPV, I’ve got CIN1 and C1N2 on my cervix.

‘The lady told me “Do not get pregnant till I’ve taken these cells out.” I didn’t know at the time that I already was pregnant.’

Looking anxious, she continued: ‘So now I’m under a consultant. They are trying not to take them out because they can cause miscarriage or early labour…

‘Obviously hopefully we can leave them but it’s all been quite scary.’

Amy also told her followers that doctors had also found fibroids – non-cancerous growths that develop in or around the womb.

Amy’s pregnancy news came as a surprise to her and her boyfriend Sam Rason after she revealed she had begun on a journey to freeze her eggs 27, having undergone a test that indicated that her fertility levels were low for her age.

She admitted to her followers: ‘I didn’t want people to think it was all a lie. It was very unexpected.’

Amy has openly documented undergoing three rounds of eggs freezing – two of which were successful and resulted in 12 eggs being frozen at a cost of £12,000. 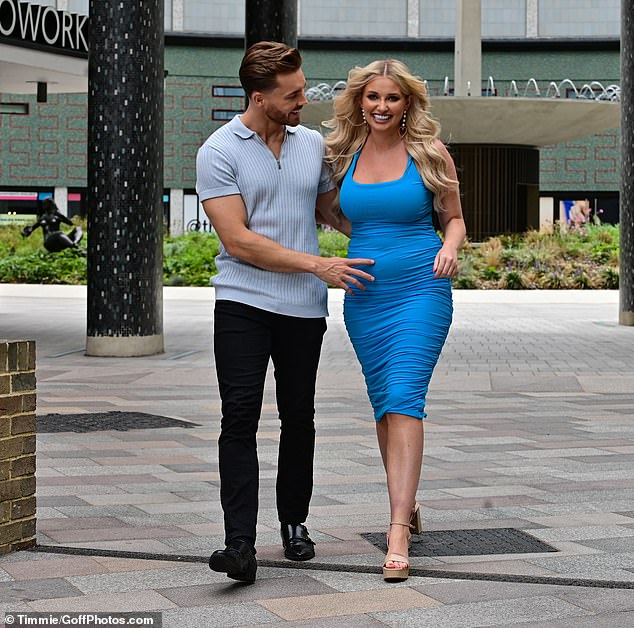 Happy: It comes as Amy and Sam stepped out together on Monday after appearing on Loose Women to announce the pregnancy 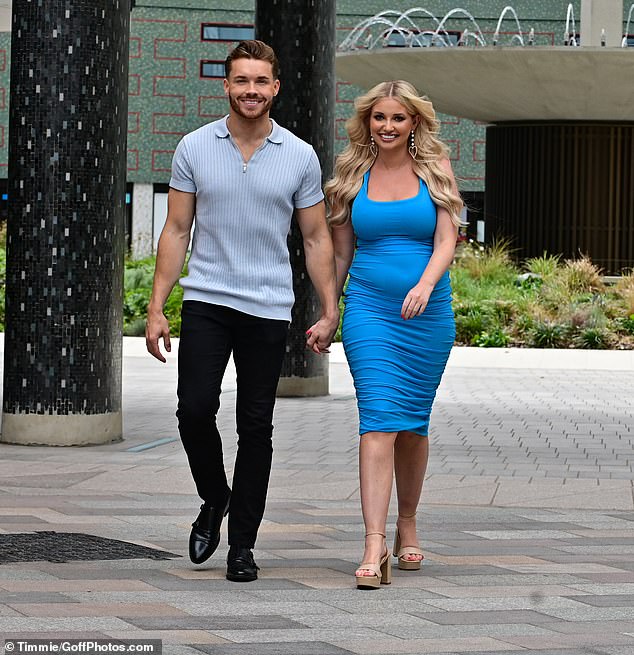 Stunning: Amy showed off her blossoming baby bump in a tight blue dress that clung to her figure

On Monday’s episode of Loose Women, she revealed that despite her fertility concerns she had conceived naturally, and that the news came as a surprise as it was ‘unplanned’.

She explained on the show: ‘I might need them in the future. It was never about not being able to get pregnant, it was more about the longevity of my egg reserve… 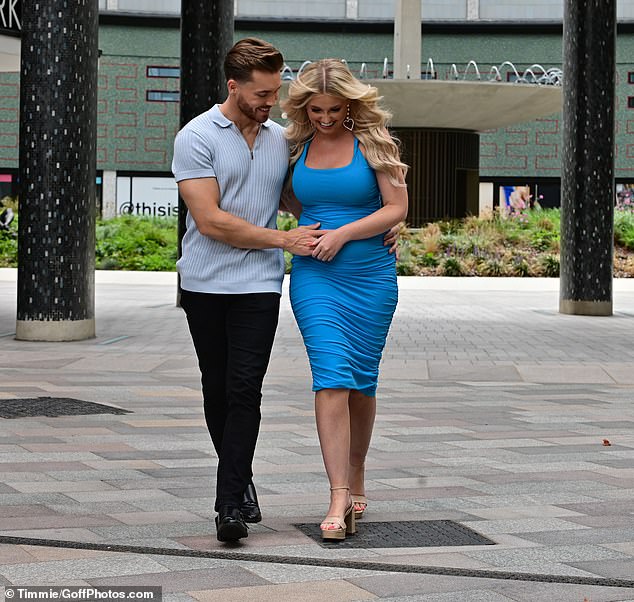 Loved-up: Sam doted on Amy as they left the Tv studios together while he caressed her baby bump 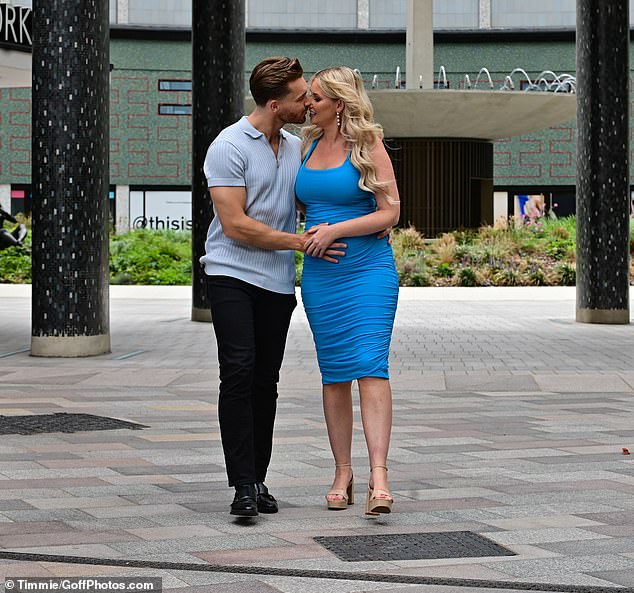 Style: Amy teamed her dress with huge nude heels and wore her blonde tresses in loose waves over her shoulders 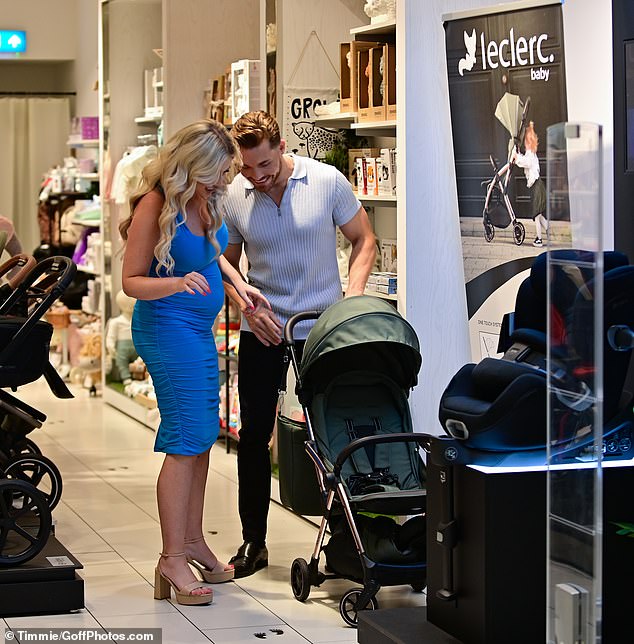 Shopping: Later the pair went shopping for prams together 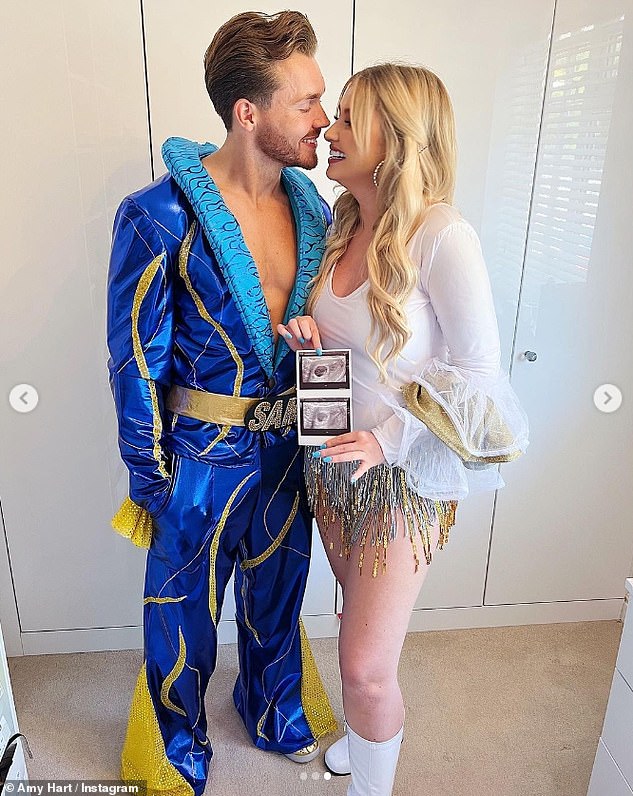 Announcement: Amy revealed she is expecting her first child with boyfriend Sam Rason as the pair made an appearance on Monday’s Loose Women before sharing a cute Instagram

Speaking on Good Morning Britain last year, the reality star explained that she had her eggs frozen aged 27 after discovering she had a low ovarian reserve, and revealed she would donate them, if she ‘can’t use them.’

She spoke to hosts Susanna Reid and Ed Balls, where she told them how early menopause runs in her family, and she didn’t want her family history or being single to ‘ever stop her having kids’.

Early menopause, also known as premature ovarian failure, is a loss of the normal function of the ovaries before a woman turns 40. It affects around one in 1,000 women aged 15-to-29 and one in 100 aged 30-to-39. 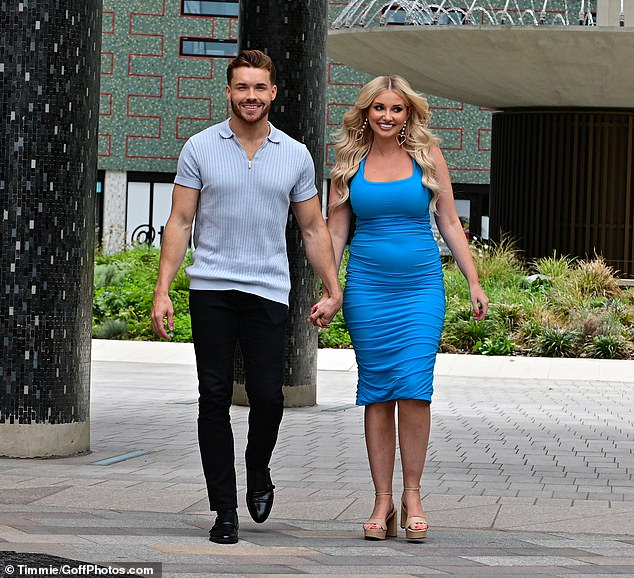 Bump: Her changing shape was visible in the tight blue dress 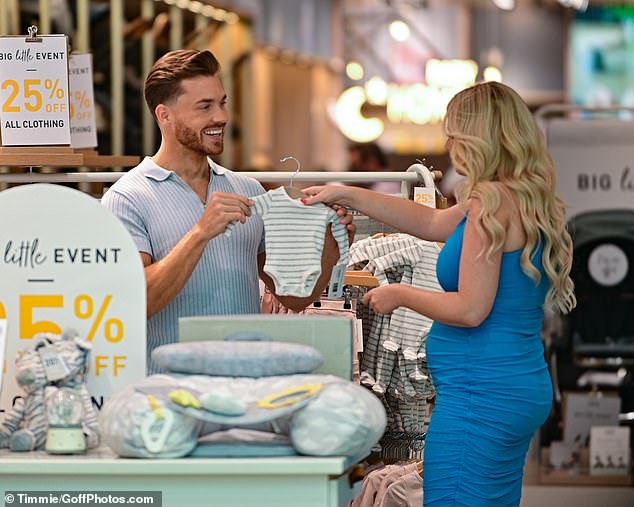 In good spirits: The couple seemed happier than ever as they picked out baby clothes 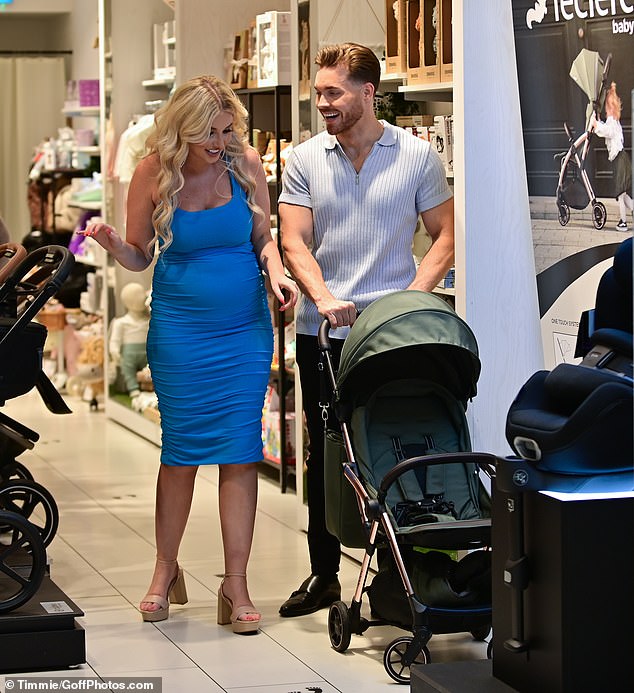 Mother-to-be: Amy has made no secret of her hopes to start a family in the past 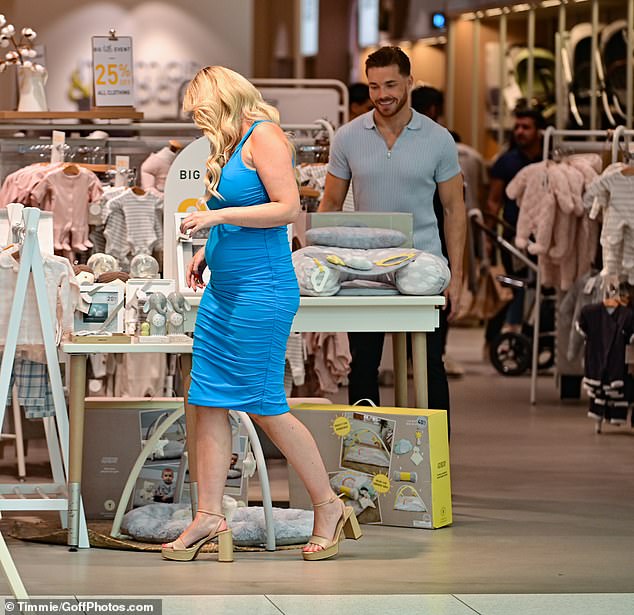 Cute: Amy looked radiant in a blue dress as the couple looked around the shops for baby things 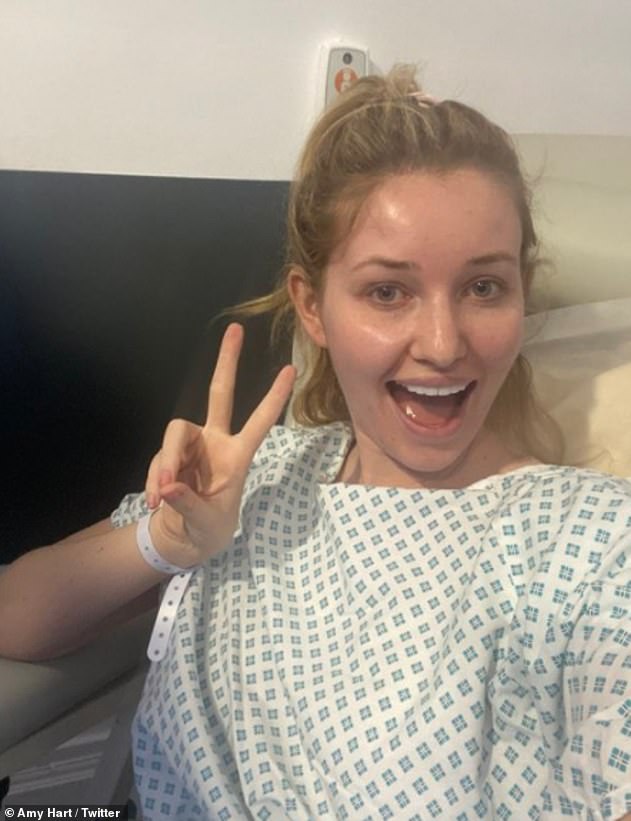 Relief: Amy has been keeping fans in the loop on her fertility journey and previously spoke about her troubling smear test results

Amy explained that when she went to see a fertility doctor, and was told: ‘We’re not going to freeze your eggs if we don’t need to’ because of her age – but they ended up doing so as she had low ovarian reserve.

Explaining that she wouldn’t have been given the option to have her eggs frozen by the NHS, she admitted: ‘I’m in a very fortunate position where I can go private, and I had a lot of support from my family, and it was something that I chose to do.

‘I understand that it’s not an option for everyone but I do believe that knowledge is power. So for me, the fertility MOT is £480 at the London clinic. 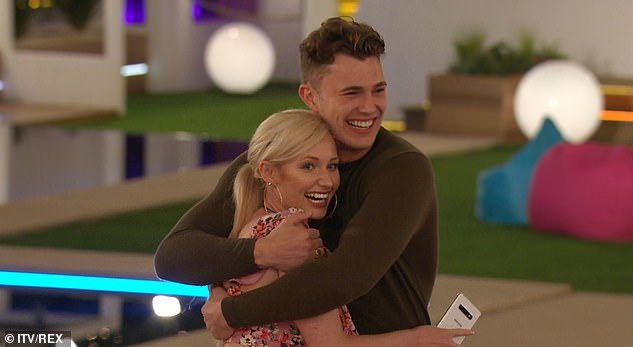 Woes: Amy was famously left heartbroken when she was dumped by ‘half boyfriend’ Curtis Pritchard on the 2019 series of Love Island

‘And that for me – just knowing. And then you can sort of plan your life – you can’t plan your life around it – that’s the wrong thing to say, sorry.

Amy found fame on the 2019 series of Love Island where she famously left the villa after getting dumped by her ‘half boyfriend’ Curtis Pritchard.

What is a smear test and what does a positive HPV result mean?

Cervical screening (a smear test) checks the health of your cervix. The cervix is the opening to your womb from your vagina.

It’s not a test for cancer, it’s a test to help prevent cancer.

All women and people with a cervix aged 25 to 64 should be invited by letter.

During the screening appointment, a small sample of cells will be taken from your cervix.

The sample is checked for certain types of human papillomavirus (HPV) that can cause changes to the cells of your cervix. These are called “high risk” types of HPV.

If these types of HPV are not found, you do not need any further tests.

If these types of HPV are found, the sample is then checked for any changes in the cells of your cervix. These can then be treated before they get a chance to turn into cervical cancer.

If HPV is found in your sample

Your results letter will explain what will happen next if HPV is found in your sample (an HPV positive result).

There are 2 different kinds of HPV positive result:

HPV found (HPV positive) and abnormal cells: You’ll be asked to have a colposcopy.