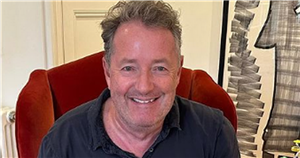 Piers Morgan has declared that he's "become a father again" as he welcomed two new adorable family additions on Sunday.

The former Good Morning Britain host, 57, who is already a dad of four, shared a sweet snap of his two new Burmese kittens on Instagram.

In the photo, shared with his 2million followers, Piers is grinning from ear to ear and holding one of the 10-week-old cats in each hand. "They’re Burmese brother and sister, 10 weeks old, and like their father, adorable.

"UPDATE: After intensive negotiations, and a suggestion from Jessical Piers, the female kitten has been named Bobby after the great Robert Piers." The post was flooded with comments gushing over how adorable the new additions are with Piers' son, Spencer Morgan, joking: "There goes more of the inheritance. Fuming."

While Abbey Clancy wrote: "Omg" with a series of heart emojis.

Piers is known to be an animal lover and in October 2021 announced the devastating news that his parents’ dog Kezzy had died aged 14.

He shared a tribute of the family’s four-legged friend on Instagram with a picture of Kezzy on a comfy chair looking up at the camera.

He said: “RIP Kezzy, 14. My parents’ wonderfully good-natured, intuitive, loyal, empathetic, and lovable dog. She will be greatly missed by all of us.”

Only recently, Piers jetted off on a relaxing family holiday to Antigua where he spent time in a "perfect post-Christmas detox.”

The broadcaster shared a series of snaps from the luxurious Carlisle Bay resort, which averages at around £818 a night, located on a stunning horseshow bay on the South Western Shore of the Island.