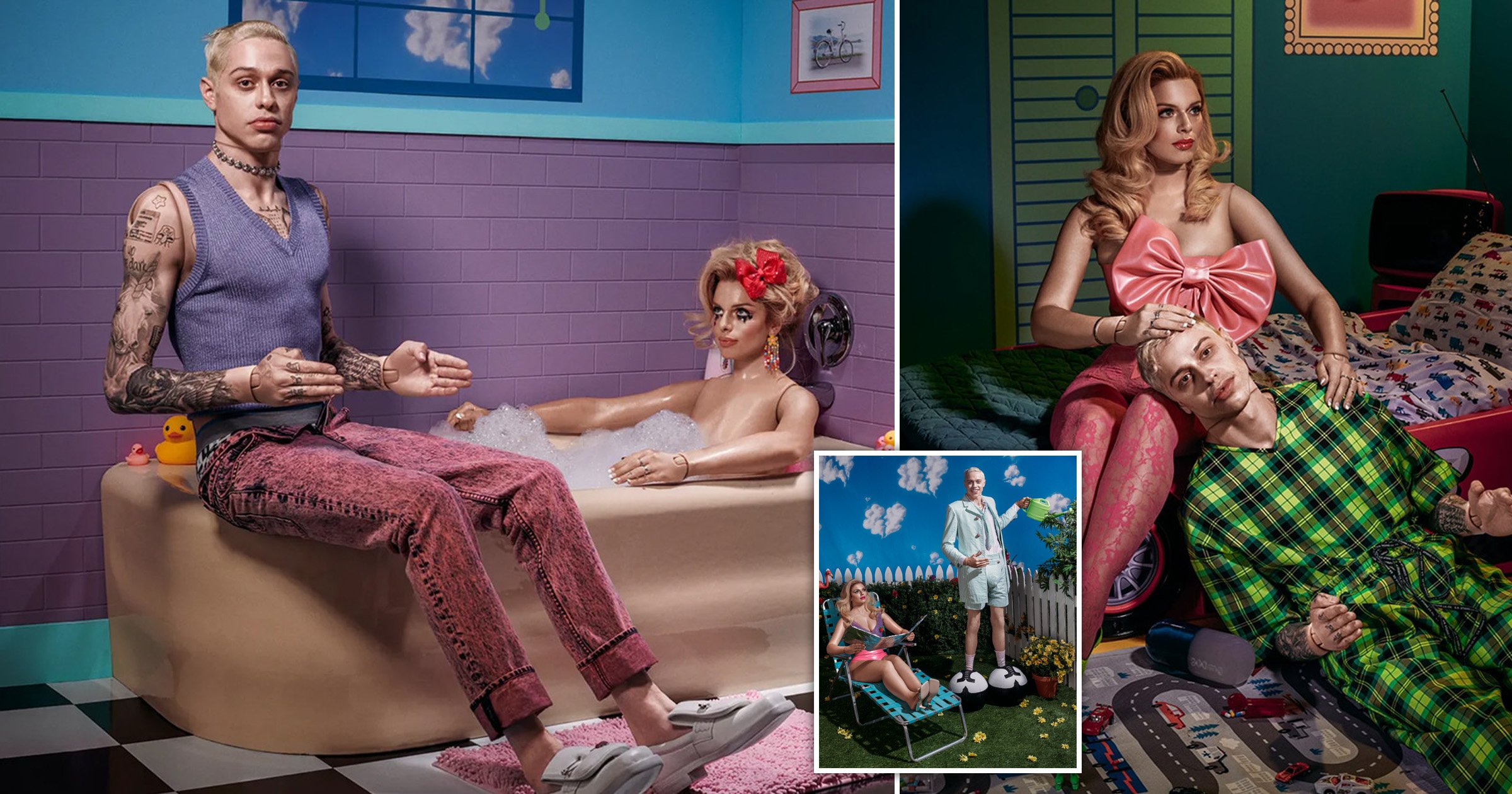 In what is one of those weird Six Degrees of Kevin Bacon links, only fewer and slightly messier, it turns out that Pete Davidson and Kanye West’s new love interest Julia Fox starred in a 2019 Barbie and Ken themed photoshoot together.

Romance rumours have been swirling around 28-year-old Pete and Kim Kardashian, 41, ever since the Skims founder hosted Saturday Night Live last October, with the pair even jetting off to enjoy time together in the Bahamas this week.

Meanwhile Julia, 31, has confirmed that she is dating 44-year-old Kanye after opening up about their dates together so far, which including a sighting of the pair attending Jeremy O Harris’ Slave Play in New York City together.

However, back in 2019, Pete starred in a cover shoot for Paper Magazine’s Break the Internet series – yes, the same one that starred Kim herself back in 2014, balancing a glass of champagne on her famous rear.

He and Julia were given the ‘plastic fantastic’ treatment in editing, so they’re all smooth, hard surfaces and jointed wrists and necks.

In one of the photos, the SNL star perches on the edge of a bathtub dressed in pink jeans, white loafers, and a lavender sleeveless sweater, with Julia joining him to pose in a bubble bath as Barbie.

Julia, who the publication described as ‘a star on the rise in her own right’ after her role in Uncut Gems – which was produced by Pete’s pal Sebastian Bear-McClard – also features alongside the comedian in two fake outdoor pictures.

In one she sits on a deck chair in a pink and purple swimming costume and mule heels while Pete ‘waters’ the plastic garden dressed in a green and white striped short suit and inflatable (yep) black and white shoes, and in another he sits in a chair in a pink patterned suit while Julia poses in a nude-coloured spandex with her foot up saucily on Pete’s crotch and elbows bent in a signature Barbie pose.

The duo is also photographed in a teen boy’s bedroom, with Pete in green check pyjamas and leaning against Julia’s legs, who sits in an extremely 80s Barbie get-up of matching pink lace tights, skirt and a giant bow top on the bed.

In another photo in the spread, Pete also has fun posing ‘Ken nude’ in one shot in a bathroom, wearing nothing but an open paisley shirt and matching neckerchief, showing off his famous tattoos.

Alongside admitting that he ‘loves licking faces’ in the accompanying interview, Pete also opened up about his love language to the publication, explaining: ‘My love language, when I’m in a relationship, is I treat the person I’m with like a princess. I try and go as above and beyond as possible, because that’s what you’re supposed to do?

‘If you’re in a relationship with someone, you’re just supposed to make that person feel as special as possible.’

Just some potential insight there into lucky ol’ Kim on her Bahamian getaway.

Meanwhile Julia has spilled the beans on Kanye, revealing they enjoyed an ‘instant connection’ after meeting in New Year’s Eve in Miami, with the rapper – who has legally changed his name to Ye – even giving her ‘a real Cinderella moment’ by filling an ‘entire hotel suite’ with clothes for her to pick an outfit.