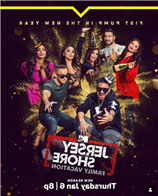 It can be hard to stay fresh to death in the dead of winter.

No one can see your biceps under all those layers, and there’s just something weird about being super tan with a foot of snow on the ground.

That’s why the DJ and his housemates are fist-pumping their way to the Florida Keys!

Yes, according to a new report from People magazine, Jersey Shore Family Vacation will be headed to Hemingway territory for the fifth season of the still-popular reality sitcom.

A statement from MTV reveals that the season will debut on January 6.

“As the world continues to change in unexpected ways, the Jersey Shore family is back together and they’re putting it all on the table,” the network said.

“From long overdue meatball days to wild nights in LA with Vinny and Mike’s ‘end of probation’ celebration to DJ Pauly D’s return to the clubs, this group continues to bring the non-stop party wherever they go.”

We know what you’re thinking — this all sounds very familiar.

And indeed, the Guido Gang has descended upon the Sunshine State in the past.

But the Florida-Jersey connection is stronger than Ronnie Magro’s quads, and with the way this crew parties, they’re gonna need to retire  at 50, so it’s important that they take every opportunity to check out the swaggiest old folks’ homes.

We kid, of course.

Unlike their boozy West Coast counterparts on Vanderpump Rules, the Shore crew knew when it was time to put the plug in the jug and throw the stash in the trash.

Mike Sorrentino was the first to get sober, and Ronnie Magro followed suit earlier this year.

(Both got clean after numerous brushes with the law, but the incentive matters less than the results.)

And these days, the “Family” in the show’s title is literal AF, as most of the cast members are parents, and several have chosen to bring their kids with them on these MTV-funded excursions.

“With the arrival of Baby Situation and Deena and Chris’ new little meatball, life events continue to bring the family closer together,” the statement from MTV continued.

“And in true ‘Shore’ style, the group heads to the Florida Keys to remind everyone how outrageous a Jersey Shore Family Vacation can get.”

It remains to be seen how many of the little fist-pumpers will be joining their parents in the Keys.

But the important thing is, one under-five-footer will be hanging out with the crew for entirety of this trip.

We’re talking, of course, about the return of Snooki.

Fans have missed her antics — there’s a reason that the show has been dubbed “Jersey Bore” — but will they be disappointed if Snooks doesn’t return to her hard-raging ways?

Not only is she a CEO and a mother of three, but her old partying partners in the Spiral Squad have changed their ways:

Ronnie is sober (and a dad) and Deena Nicole Cortese just welcomed her second mini-meatball in May.

And if there’s any state than can bring out the old Snooki — it’s Florida.