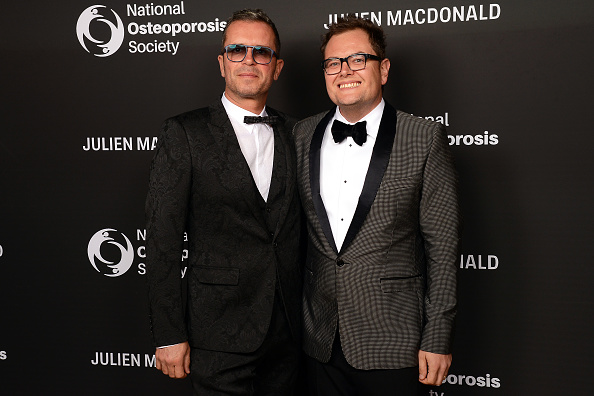 Alan Carr is getting his husband Paul Drayton ‘the help he needs to get better’, after he started drinking again.

The Chatty Man star said that his husband’s wellbeing is his ‘number one priority’, after Paul, 49, posted a picture of himself to Instagram bearing a black eye.

When a follower asked what had happened, Paul replied: ‘We had a bad row.’

There was no suggestion of who Paul had a row with or how he sustained the injury; the image has since been deleted.

Alan, 45, denied causing the black eye and explained that Paul, who has struggled with alcoholism, had injured himself after falling off the wagon.

The comedian told The Sun: ‘While I was away filming on location the past few weeks, Paul fell off the wagon and started drinking again.

‘When I arrived back home from Wales, Paul was covered in scratches and bruises from a drinking binge.

‘We are now working together to get the help he needs to get better which is our number one priority right now.’

Paul, who has been with Alan for more than 14 years, wrote on his Instagram stories this morning that a follower had tipped the press off to the photo, which was deleted within an hour.

Over an image of a mug bearing the slogan ‘I’m such a mug’, he wrote: ‘I’m feeling very fragile at the minute and would like to say that Alan would not and has never hit me. And I’m devastated that he has to deal with this today.’

Alan has previously spoken about his husband’s struggles with drinking, and in his book Alanatomy, he wrote about how Paul began drinking more heavily after injuring his back in 2015 and while his husband was on the road with work.

He wrote: ‘It’s horrible when you realise how bad it’s got. You’re watching someone kill themselves.

‘I wanted to leave him. It’s the lies that get you – the, “Oh I’ll never drink again”. And then you go out, realise you’ve forgotten your car keys, go back and…[Paul would be drinking.]

‘I couldn’t cope, because when I left the house, I didn’t know if he was going to have a fall, or put something on the hob and fall asleep. He was grey and shuffling around. It was like watching someone die.’

Paul went to rehab that year, and checked himself in again in 2018, the same year that he and Alan tied the knot in a wedding officiated by their close friend Adele.

Alan told Kelly Hoppen on her podcast that lockdown was ‘tough’ for Paul, saying: ‘He’s been saying, “Oh, shall we get a bottle?” and I say, “No, we’re not getting any rosé wine in”.

The TV star stopped drinking during lockdown to support his husband, and now says that he tries to keep his drinking to special occasions.

Drinkline is the national alcohol helpline. If you’re worried about your own or someone else’s drinking, you can call this free helpline in complete confidence. Call 0300 123 1110 (weekdays 9am to 8pm, weekends 11am to 4pm).