Specialist employment law centres that help women take action against underpayment and sexual harassment are warning they are at risk of closure as a decision on giving them permanent funding is delayed.

The federal government is still consulting states and territories over funding for the working women’s centres, which the landmark [email protected] report from the national inquiry into sexual harassment in Australian workplaces recommended should be increased and made recurrent. 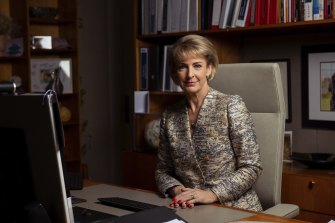 Attorney-General Michaelia Cash is still consulting her state colleagues about how to provide funding for working women’s centres.Credit:Dominic Lorrimer

Sex Discrimination Commissioner Kate Jenkins recommended in the [email protected] report that their funding should be boosted and similar services set up in the states that don’t have them.

“Our national inquiry found that support, advice and advocacy for victim-survivors of sexual harassment should be delivered through a multifaceted, holistic approach, including smooth and speedy referrals between services,” she told The Age and The Sydney Morning Herald.

“Working women’s centres are well-placed to act as a central hub for this approach and address the intersectional needs of victim-survivors in a way that other services may be unable to.”

Adelaide worker Lauren sought out the SA working women’s centre after being owed money when she was made redundant from a marketing company at the start of the pandemic.

When she started speaking with the specialist service, she realised it could also help her deal with the sexual harassment she had experienced on the job.

“She was the first person who took it really seriously and understood it,” she said.

Before May, only the SA centre was receiving federal funding. Those in Queensland and the NT received emergency, interim funding of $100,000 each in the federal budget to keep them running for a short time.

Nicki Petrou, head of the NT centre, says they were expecting a decision about ongoing funding at the women’s safety summit that was supposed to be held at the end of July. That summit was postponed until September because of the coronavirus outbreak in Sydney.

“We’re feeling a bit nervous because July was okay because of the [interim] funding. But we always knew it would only be a matter of months and that would leave a very tight timeframe if any of these conversations were delayed or protracted,” she said.

Ms Petrou and her staff of four have already lost two colleagues and have no administrative support as they run their shoestring operation.

“If we don’t secure funding come October, then we’re going into the next stage, which will be implementing the reduction … of our services and working towards closure.”

The Queensland centre lost federal funding in 2016 so merged with a community legal service, which its head Fiona Hunt says will help keep it afloat longer.

But it has had a 20 per cent increase in cases over the past year and is turning away women seeking help.

A spokesman for federal Attorney-General Michaelia Cash said she had discussed funding for the centres with her state and territory colleagues in early June.

“[The attorneys-general] agreed to task Commonwealth and state and territory officials to review the scope of services provided by working women’s centres and like services, and to consider the feasibility of funding for services including under the national legal assistance partnership,” he said.

The women’s safety summit will be held on September 6 and 7.