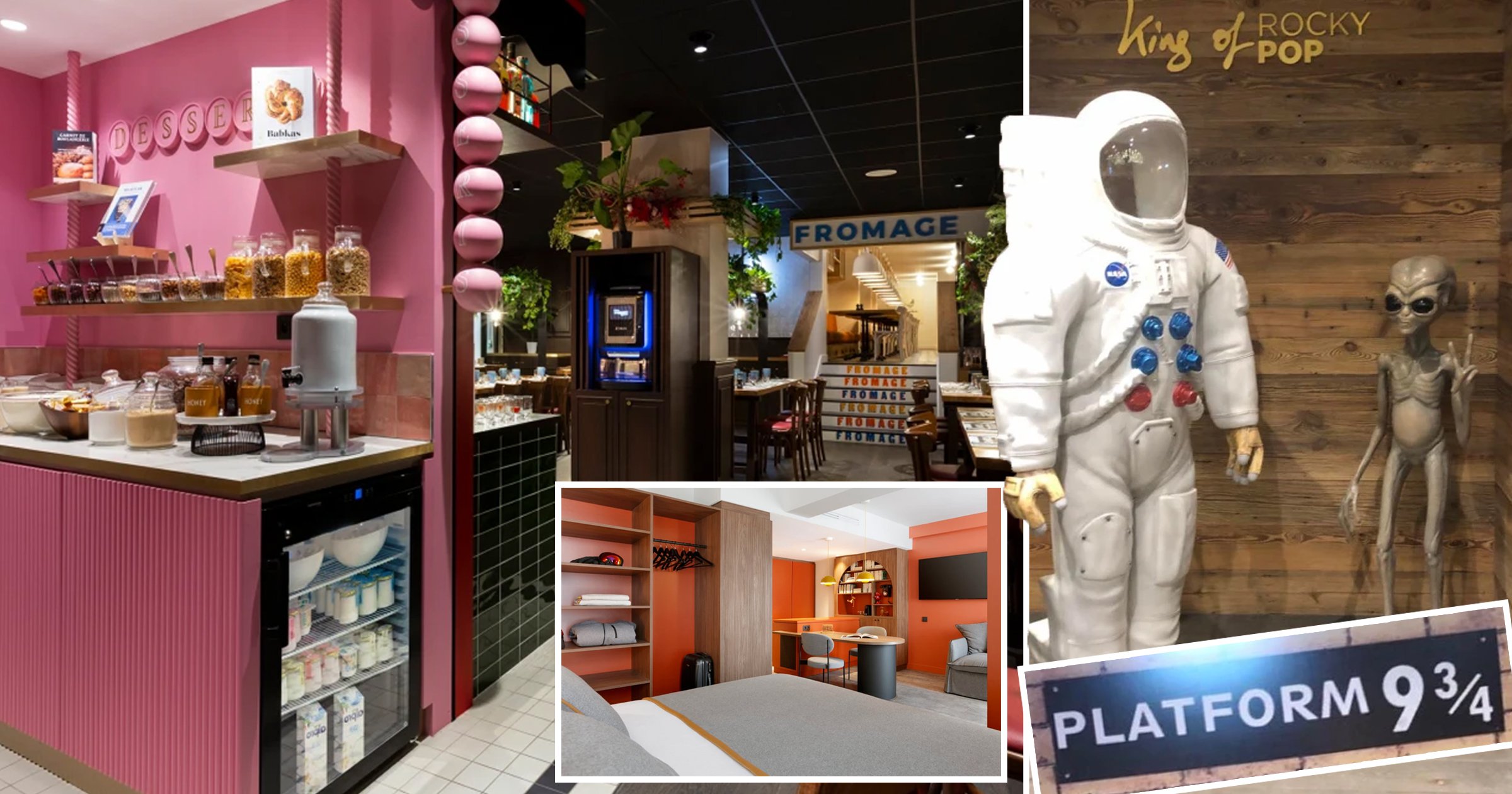 Arriving at night in the concrete-towered French resort of Flaine, there’s a touch of Hollywood razzmatazz amid the greyness – a bulb-framed sign saying, ‘We will Rocky Pop you’.

Who knows what that means?

But walk into the new RockyPop hotel and it’s clear it might be a lot of fun. Inside, an astronaut and an alien stand at the entrance, while a sliding door marked Platform 9 ¾ leads to a bar and seating area filled with cloud light fittings and wall-mounted plastic dinosaur heads.

Hotel owners Assas – who opened the first RockyPop in Les Houches, Chamonix five years ago – have really taken the pop-art theme and run with it.

Around the lounge areas, people are playing table football, pool, board games, darts and on old-school arcade machines.

Only the giant concrete fireplace gives a clue as to the building’s austere 1960s beginnings.

It was designed by Hungarian modernist Marcel Breuer, famed for his links to the Bauhaus school.

Given the brief to fit buildings within the natural bowl of the valley, Breuer opted for concrete-and-wood towers that are described either as a marvel of modernist architecture or a blot on the landscape.

The resort is popular with British skiers for its good snow, ski-in, ski-out accommodation and short transfer time (less than 90 minutes to Geneva airport).

On the second I cover the miles towards the more traditional villages of Samoëns and Les Carroz.

Back at the hotel, there’s a good-sized pool and steam rooms, and a Nuxe spa, where I unwind with a heavenly half-hour massage (€60/£50).

Finally, there’s a nod to the environment with a tile in the shower urging customers: ‘Save water, shower à plusieurs’ (with more than one person). Now, that really is a sign of the times.

So cheesy: What can you eat there?

And in an area famed for its cheeses, lunch choices are easy.

There’s more to come when I dine at Frometon, one of RockyPop’s three restaurants.

It serves up rib-sticking fondue with melted Reblochon. Nearby there’s a sign saying, ‘Sweet dreams are made of cheese’.

The hotel’s other restaurants are a buffet, where breakfast (£14) and varying dinner cuisines are served daily (£31), and a sushi restaurant.

Hotel manager Yann Crottet tells me: ‘We could have just had one but we want people to stay and enjoy everything.’

I’m too stuffed to argue.

Easyjet flies from London to Geneva from £17.99 one way, easyjet.com. Rooms at RockyPop Flaine from £117pn, rockypop.com/en/flaine. Visit en.flaine.com and savoie-mont-blanc.com