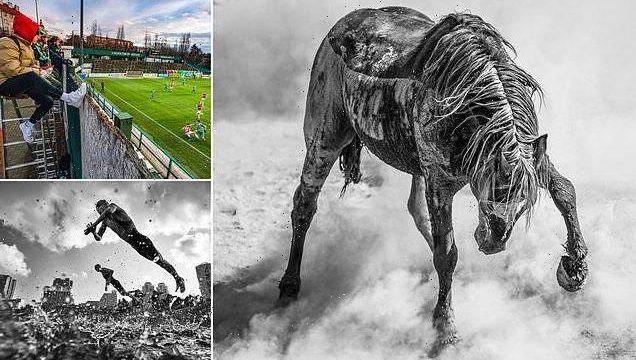 A wild stallion, a magical mountain in the Scottish Highlands and football fans watching a match on stepladders: The winners of the 2022 Sony World Photography Awards revealed

Feast your eyes on these.

The winning photographers in the 2022 Sony World Photography Awards have been revealed – and their work is certainly gong-worthy.

The contest, which received a staggering 170,000 entries, was divided into four different competitions – Professional, Open, Student and Youth – with individual categories in each. Across all four, there was a huge variety of work that impressed the judges, with everything from an image of dedicated football fans in the Czech Republic watching a match on stepladders to a jaw-dropping shot of a wild horse that won Briton Scott Wilson the title of Photographer of the Year in the Open competition.

However, it was Australian photographer Adam Ferguson who was named Photographer of the Year, thanks to his poignant photo series highlighting the plight of migrants crossing the Mexican border into the US.

Commenting on the competition results, Scott Gray, the founder of the World Photography Organisation, which collaborates with Sony, said: ‘We challenge photographers, and the jury, to find new work and original ways of capturing those ideas so as to provide fresh perspectives and original concepts. This year’s winners have done exactly that. The Sony World Photography Awards mirror the state of contemporary photography today and I think that the winners show what an incredibly diverse, stimulating and comprehensive medium it is.’

Select work by the winners and shortlisted entries across numerous categories will be exhibited as part of the Sony World Photography Awards at Somerset House in London from April 13 to May 2. Below is MailOnline Travel’s pick of the amazing prizewinners – scroll down to the very bottom to see the work of the overall winner… 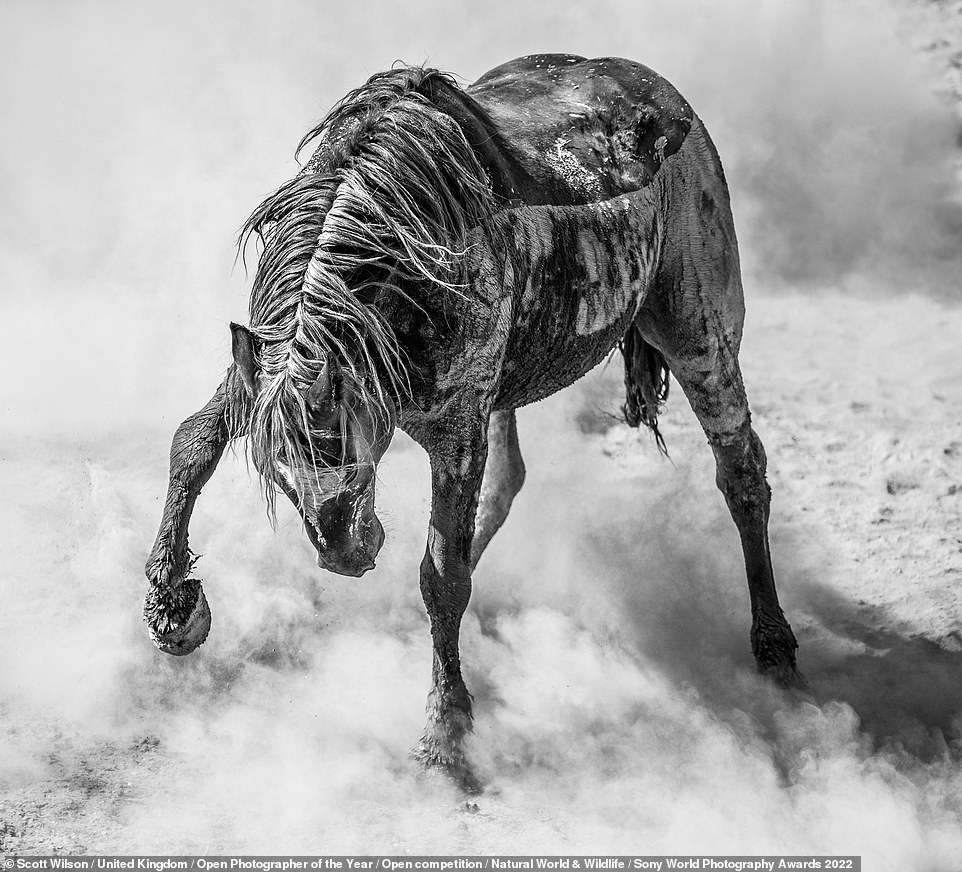 This spectacular shot earned British photographer Scott Wilson the title of Photographer of the Year in the Open competition, which ‘celebrates the power of single images’. Titled ‘Anger Management’, it shows a wild mustang stallion kicking up a dust storm in northwestern Colorado 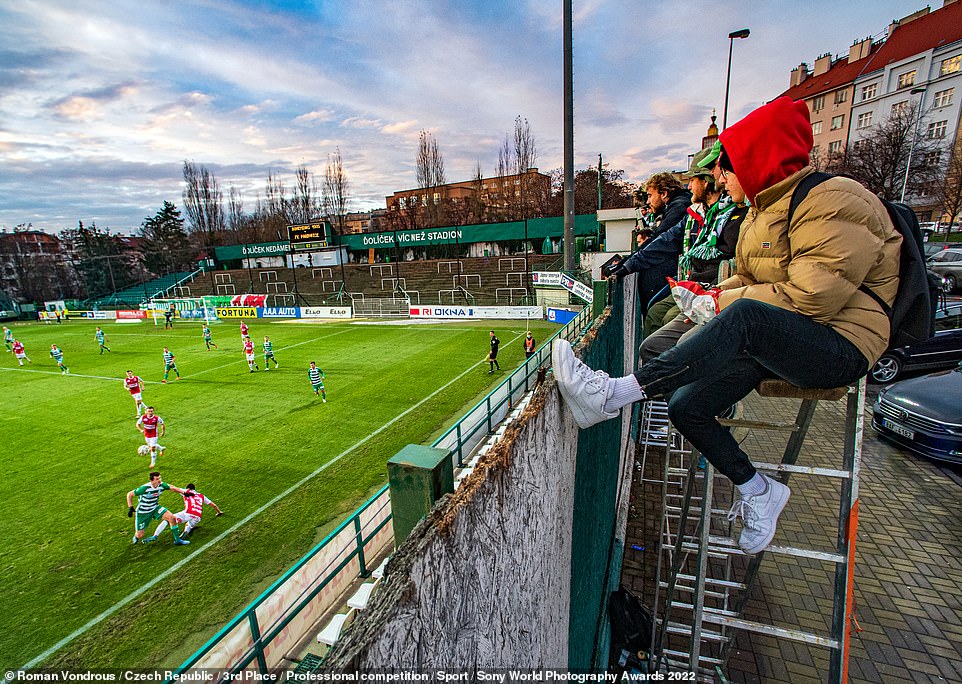 Czech photographer Roman Vondrous was awarded third place in the Sport category with his series Loyal Fans. Above is one shot from the series, which the judges said shows ‘the zeal and devotion of the fans of the Bohemians Prague 1905 football club, who were not deterred by the pandemic restrictions, bringing their own ladders to watch games over the fence’. In the image, which was captured in December 2020, Bohemians Prague 1905 are playing against fellow Czech team FK Pardubice 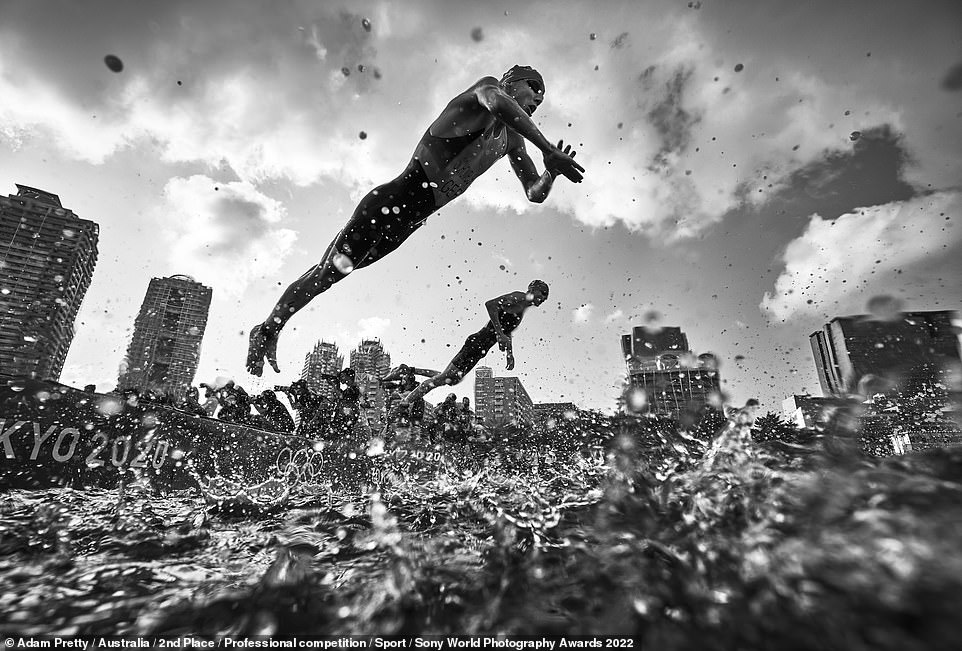 This is one shot from a series on the 2020 Summer Olympics in Japan by Australian sports photographer Adam Pretty, who took the silver medal in the Sport category. The judges said his photo series Tokyo Twenty Twenty One effectively captures the ‘drama and excitement’ of the Olympics and ‘shows the strength and prowess of the athletes’.  The picture above shows men taking part in the triathlon 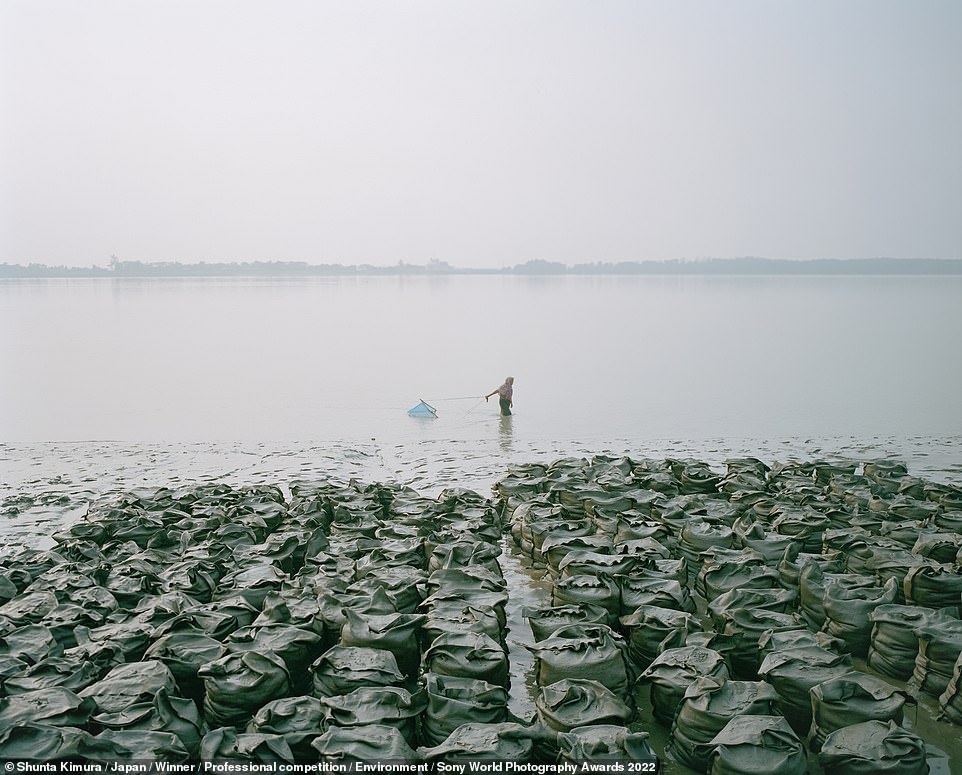 This striking shot shows a woman catching small fish and shrimp in Bangladesh. It was taken by Japanese photographer Shunta Kimura and is part of his series Living in the Transition, which ‘explores the impacts of climate change in Bangladesh, where locals increasingly contend with its effects such as river erosion, landslides, and rising salinity levels’. Kimura was named the winner of the Environment category 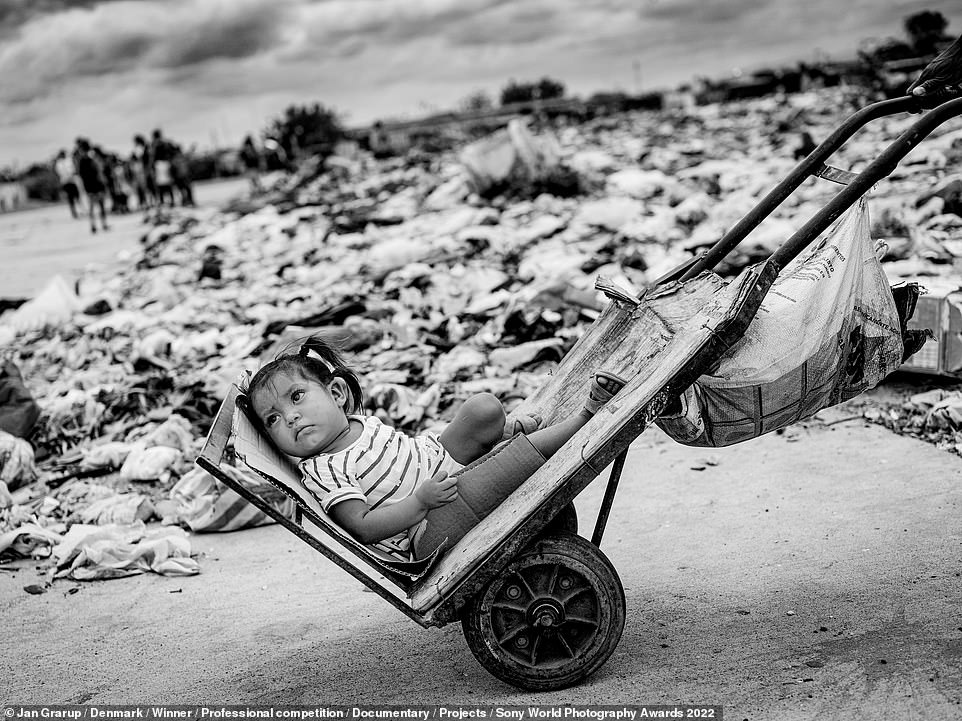 Above is a poignant shot from the series ‘The Children of the Financial Collapse in Venezuela’. The series was captured by celebrated Danish photojournalist Jan Grarup, and depicts scenes of the desperation and abject poverty of Venezuelans in Colombia. He was named the winner of the Documentary Projects category 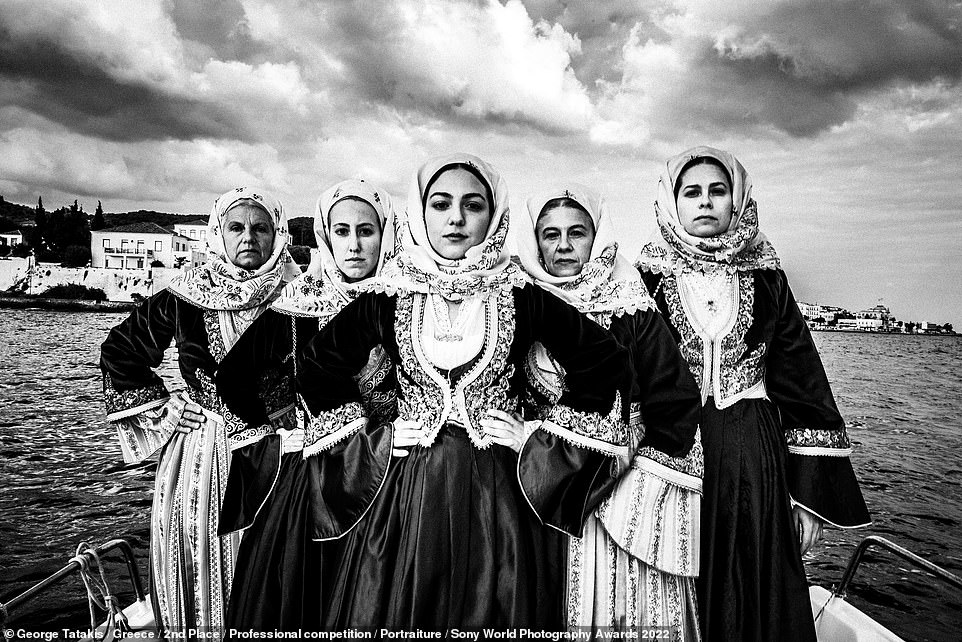 This captivating shot is the work of Greek photographer George Tatakis, who came second in the portraiture category. It shows women wearing Bouboulina dresses off the coast of Spetses island in the Saronic Gulf, Greece, and was taken as part of the photographer’s ‘Caryatis’ series. In the series, Tatakis captured women wearing traditional costumes from different periods of Greek history, with each photograph meticulously researched and staged 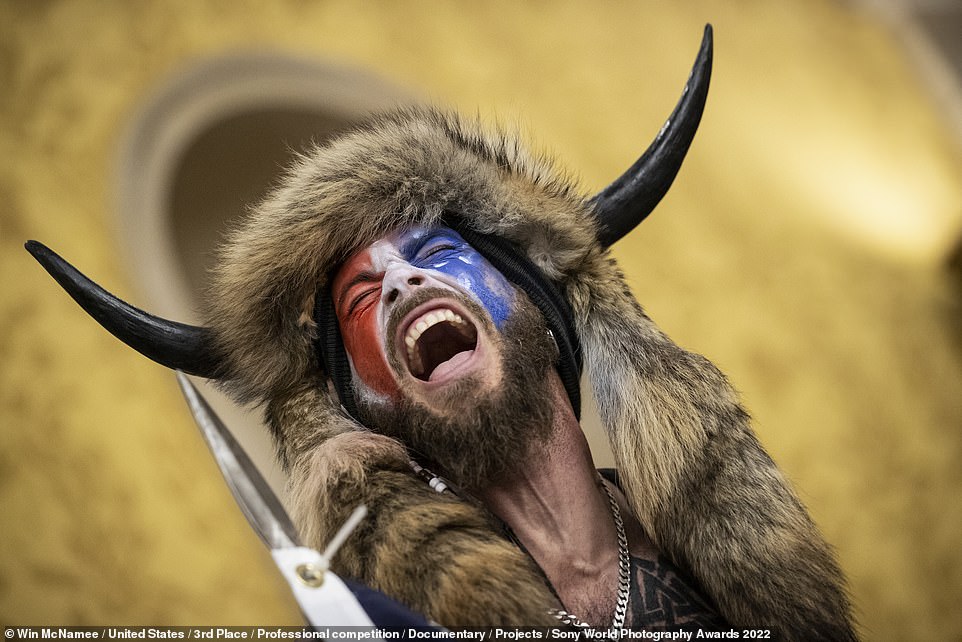 The picture above, showing QAnon influencer Jacob Chansley shouting ‘freedom’, is from American photographer Win McNamee’s series of scenes from the Capitol riots on January 6, 2021, when a mob of Trump supporters descended on Washington DC’s Capitol Building and fought their way inside. McNamee took home third prize in the Documentary Projects category 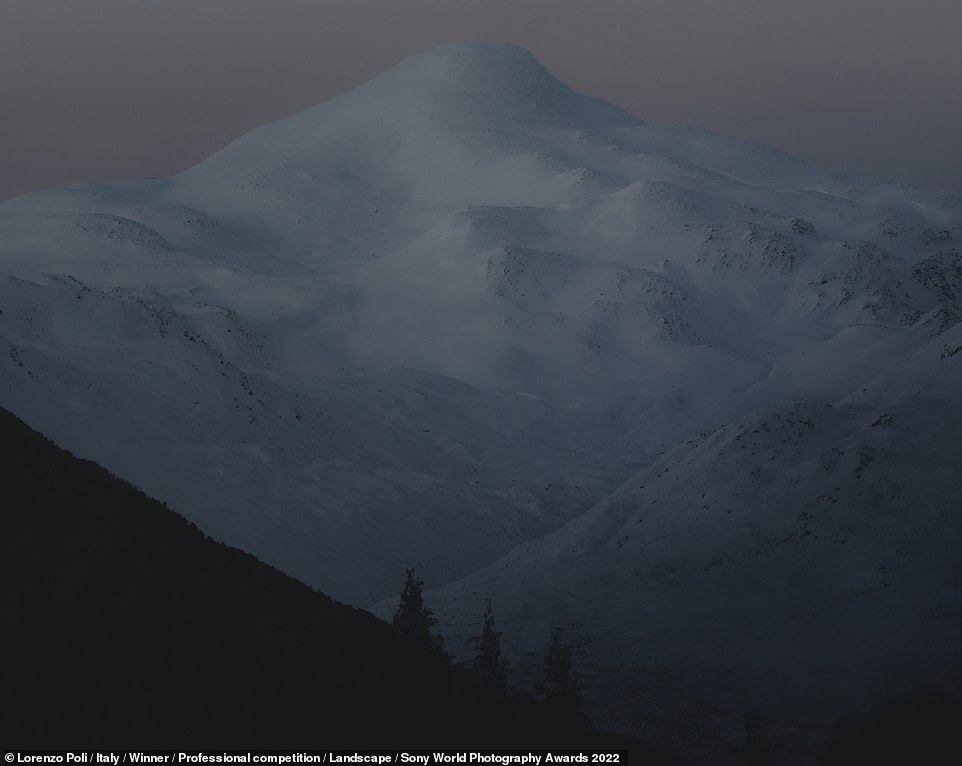 This atmospheric image, taken in the village of Torridon in the Scottish Highlands, is by Italian photographer Lorenzo Poli, who was named the winner in the Landscape category. It appears in his Life on Earth collection, which the judges said ‘delves into the ethereal magic of nature and the mysterious beauty of an untamed world, depicted through a diverse set of landscapes’ 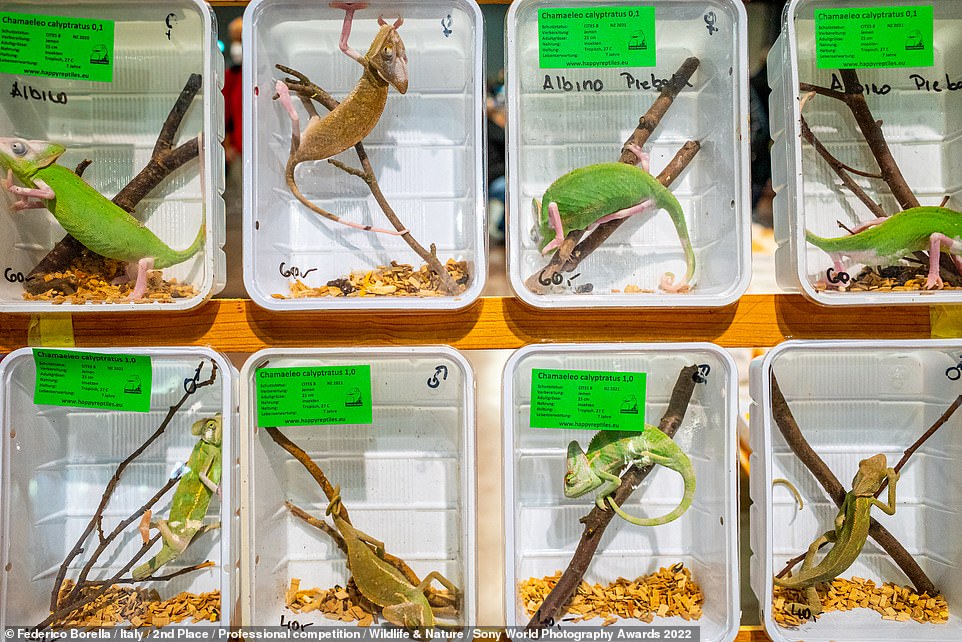 Italian photographer Federico Borella took this intriguing photo, which shows chameleons on display in plastic boxes during an exotic animals trade fair in Vicenza, Italy, in November 2021. The shot, titled ‘Exotic Appetite – Inside the Italian Exotic Animal Trade’, earned him second place in the Wildlife and Nature category 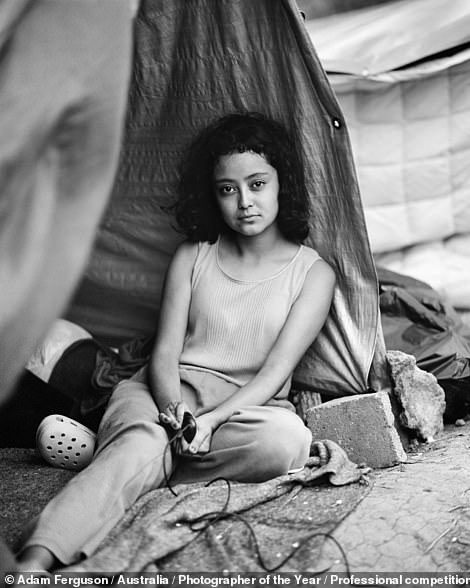 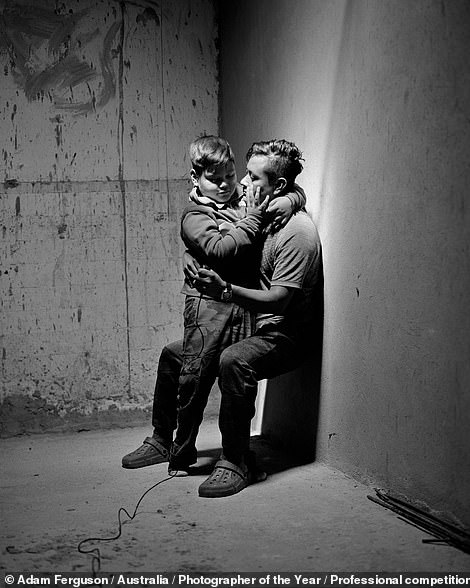 These powerful photos are from Photographer of the Year Adam Ferguson’s winning series of shots. And here, the subjects decided when the pictures were taken, with Ferguson giving them a button to press to activate the camera. The picture on the left shows Stephanie Solano, 17, from Zacapa, Guatemala, who took a self-portrait at a migrant camp in Reynosa, Mexico, on May 3, 2021. The picture was taken as she waited to cross the border to the U.S with her mother to seek employment. Their family life in Guatemala had become hugely disrupted when Stephanie’s father developed a chronic kidney illness and lost his job. Her mother had to stop working as a seamstress to care for him and eventually they lost their home. Moving in with Stephanie’s grandparents, they scraped by on food donations and Stephanie had to quit school and skip meals to cut down on expenses. The move to the U.S was therefore born out of desperation. The picture on the right was taken at the El Buen Samaritano migrants shelter in the city of Juarez, Mexico, on April 28, 2021. It shows Carlos Soyos, 34, from Guatemala City and his son Enderson, eight. They had been in Juarez for 20 days after travelling by bus from Guatemala City, where Carlos was struggling to raise Enderson, who has tuberous sclerosis, a rare genetic condition. Carlos’s wife and two daughters, ages 12 and six, made it to the USA in 2019 to seek treatment for their six-year-old daughter, who suffers from the same condition. Ferguson said: ‘To capture a piece of [these uncertain journeys], I mounted a medium format camera on a tripod with a cable release and then stepped back, allowing the migrants to choose the moment of capture and give them agency in the process of documenting their lives’