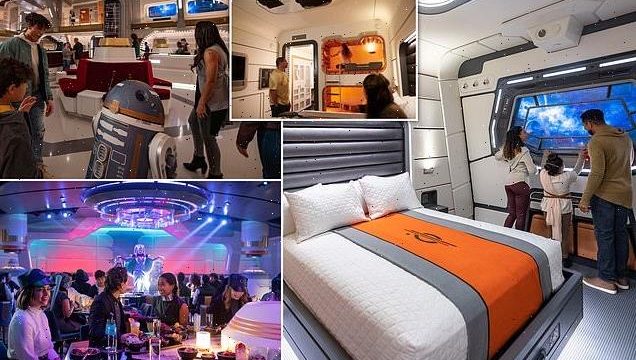 Walt Disney recently opened its Star Wars: Galactic Starcruiser experience in Florida – and pictures reveal how guests will feel like they’re vacationing in luxury in a galaxy far, far away.

The experience at Walt Disney World in Orlando starts from $4,809 (£3,654) for two guests and includes two days and two nights in one of 100 Starcruiser cabins. It puts visitors into a story set on the Halcyon, a sleek space vessel said to be the place where Princess Leia and Han Solo took their honeymoon.

Disney’s designers hope visitors embrace the chance to play a role in the fictional world created by George Lucas, interacting with space droids and Han’s hairy sidekick Chewbacca and meeting new characters during their stay. 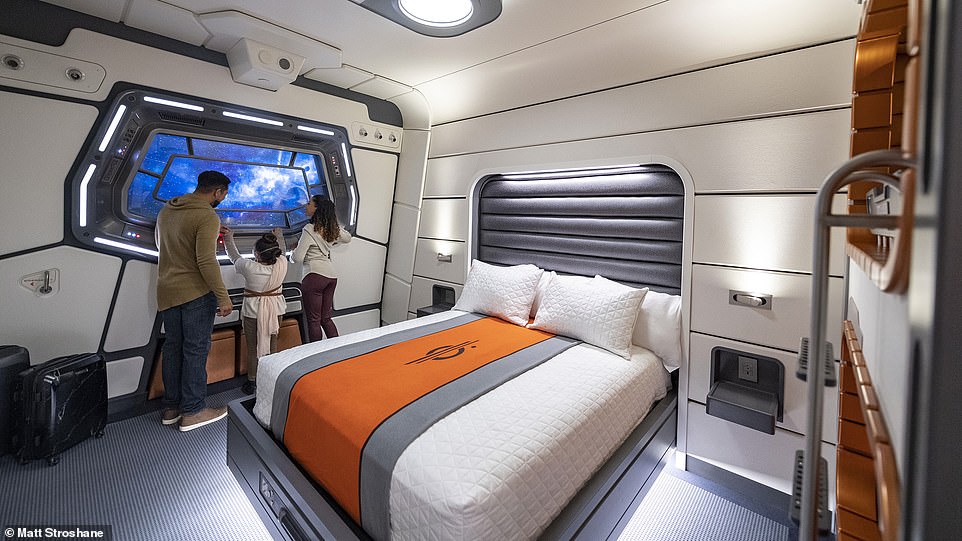 Walt Disney recently opened its Star Wars: Galactic Starcruiser experience in Florida, which puts guests into a story set on the Halcyon space vessel. Above is one of the 100 Starcruiser cabins that guests can stay in

The first-of-its-kind adventure also  features galactic-inspired food and drink and a visit to Batuu, the ‘Star Wars’ planet inside the Disney World theme park.

Like a traditional cruise, all guests board at the same time. A captain and cruise director offer a welcome, but things go awry when Stormtroopers appear. Characters ask visitors for assistance, urging them to decide to align with the Resistance or the evil First Order. 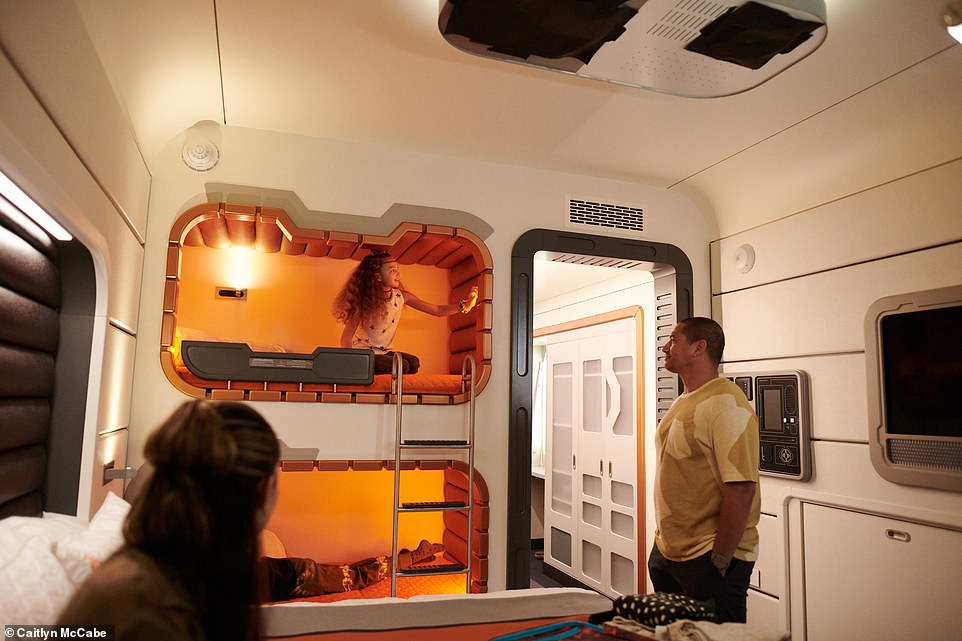 A Starcruiser cabin with bunkbeds. The first-of-its-kind adventure is pricey, starting at $4,809 (£3,654) for two guests 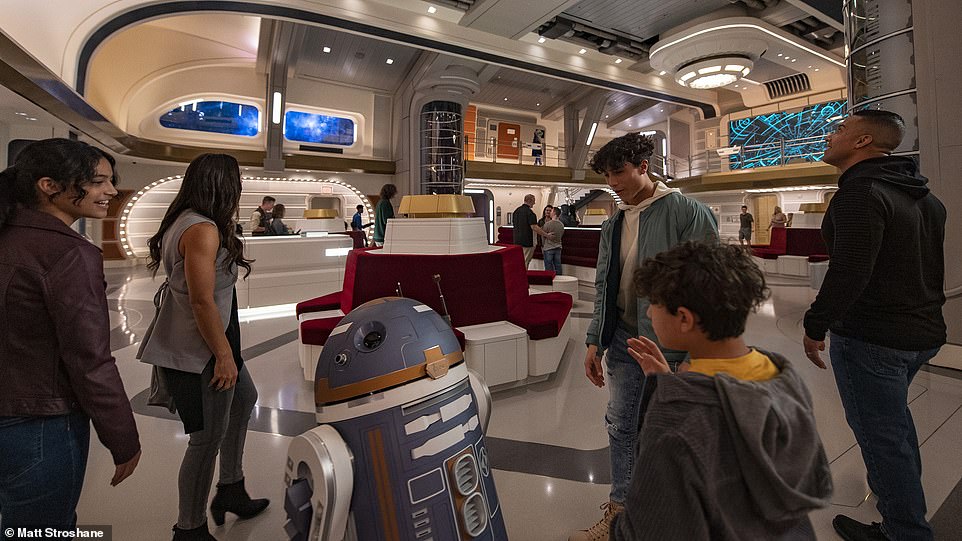 A space droid greets guests in the atrium of the starcruiser. Disney’s designers hope visitors embrace the chance to play a role in the fictional world created by George Lucas 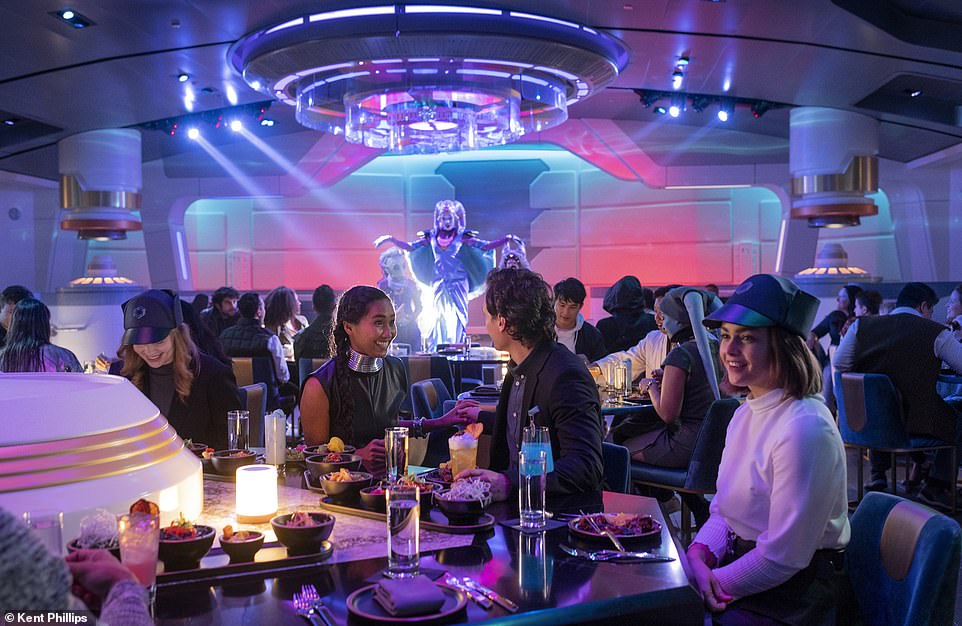 ‘You can choose to lie to a character, you can help them, you can gain their trust, you can double cross folks,’ said Ann Morrow Johnson, executive producer and creative director for Walt Disney Imagineering. ‘And you can really continue that relationship with them as you want your story to unfold.’

‘Star Wars’ costumes are encouraged. To dress for the occasion, guests can drop into The Chandrila Collection, a boutique on the vessel that sells outfits in a galactic fashion.

Next, guests can wander through the ‘Engineering Room’ before heading to the ‘Bridge’, where they’ll get the chance to experience what it would be like to operate the ship’s navigation and defence systems under the crew’s guidance.

What’s more, crew members are on hand to offer training in how to handle a lightsaber. 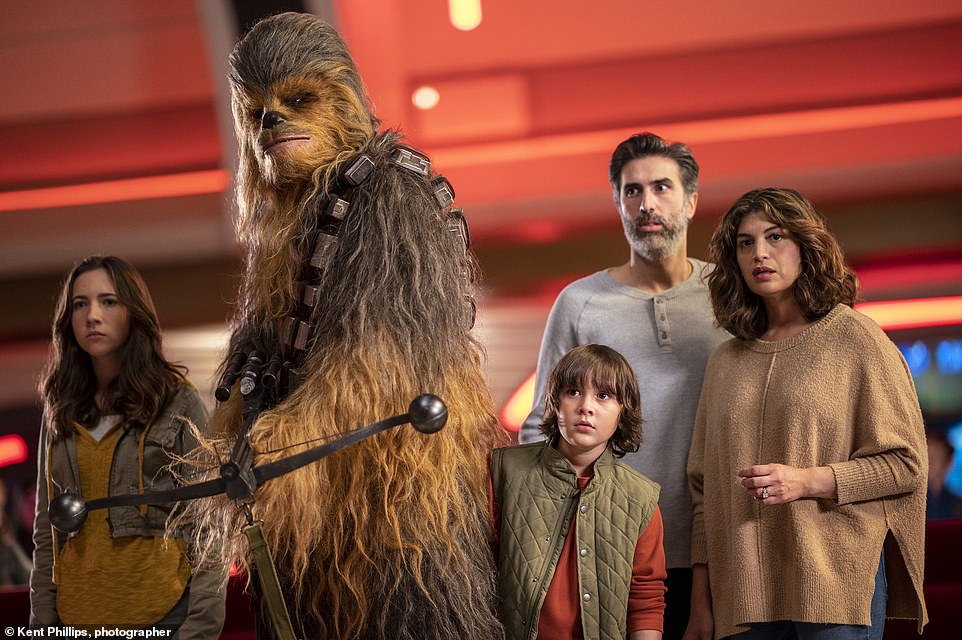 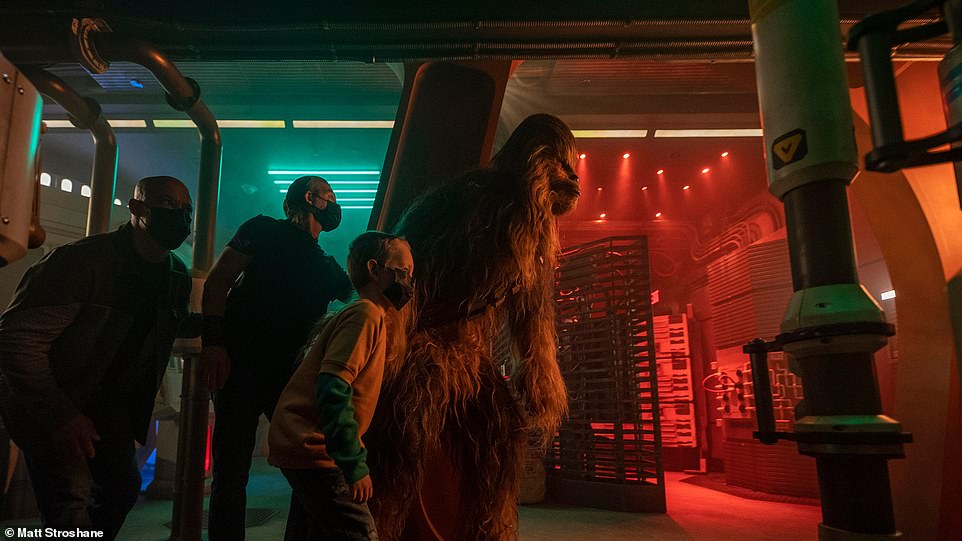 Designers said that the Starcruiser experience takes elements from gaming, theatre, storytelling and hospitality. Above, Chewbacca leads guests through the Halcyon’s Engineering Room 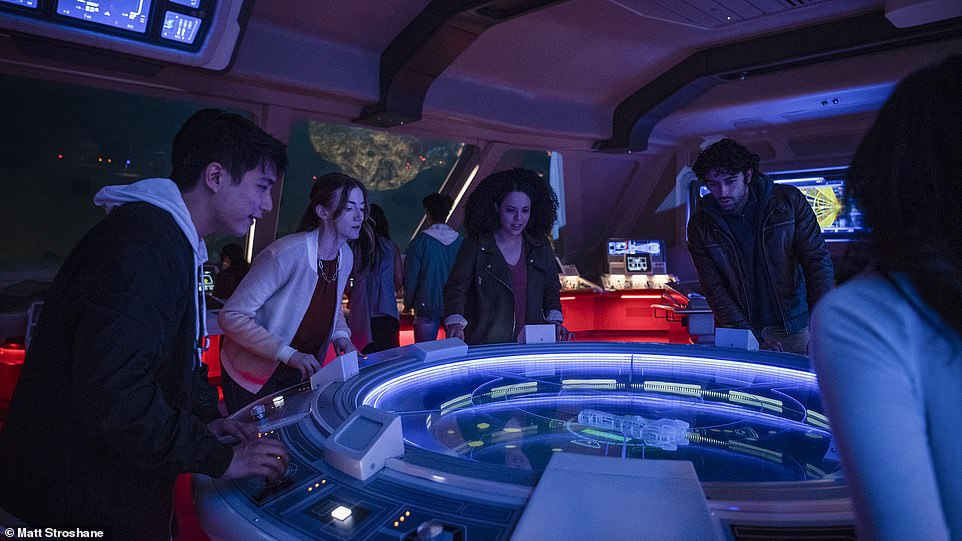 In the ‘Bridge’, pictured, guests get the chance to experience what it would be like to operate the ship’s navigation and defence systems under the crew’s guidance 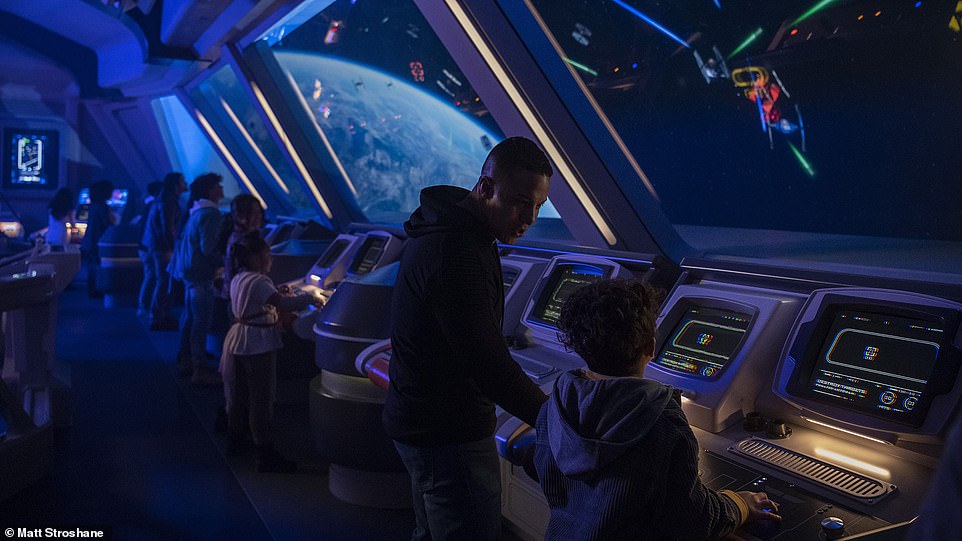 The ship’s ‘Bridge’. ‘We are trying to make it safe and fun to play Star Wars,’ said a representative from Walt Disney Imagineering 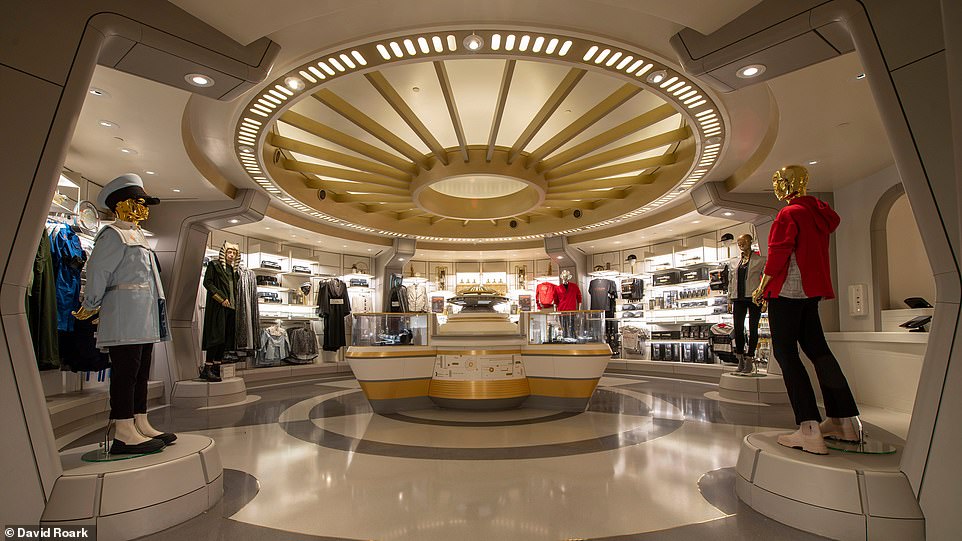 Guests can shop for outfits in a galactic fashion in The Chandrila Collection boutique, pictured above

When evening falls, the glitzy Crown of Corellia Dining Room offers nightly musical entertainment from an intergalactic diva and band.

In the Sublight Lounge cocktail bar – which is suitable for all ages – visitors can play a round of sabbac, a card game in the ‘Star Wars’ universe.  Or they can chill in the atrium without any pressure to participate in the story, the creators said.

And once guests retire to their sleeping quarters, they can look out the ‘window into space’ that’s built into the wall of each cabin, offering views of ‘spectacular ships and galactic sights’. 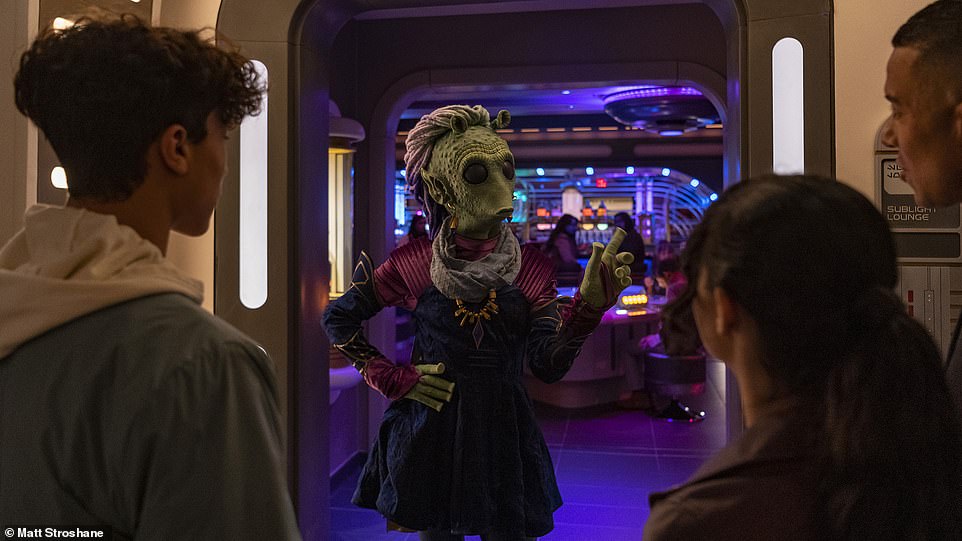 Ouannii, a musician from Rodia – a planet that appears in Star Wars: The Clone Wars, greets guests outside the Sublight Lounge 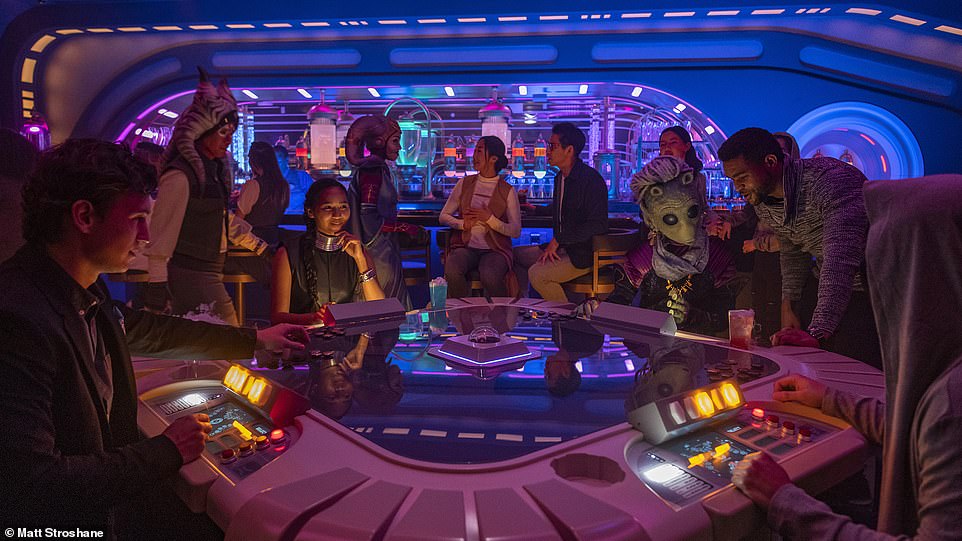 In the Sublight Lounge, pictured, visitors can play a round of sabbac, a card game in the ‘Star Wars’ universe 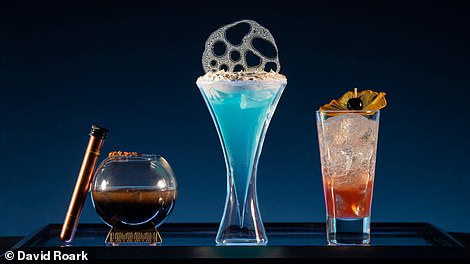 ‘We are trying to make it safe and fun to play Star Wars,’ said Scott Trowbridge, portfolio creative executive at Walt Disney Imagineering.

‘If you want to lean in and wear some galactic finery and cosplay, it’s totally fine,’ Trowbridge said. ‘But also if you just want to sit back, wear your Star Wars T-shirt, drink a cocktail and watch the planets drift by, that’s also OK.’

The company did not disclose what it spent to build the experience, which was in development for more than six years. But executives said they adhered to Disney’s famous attention to detail and aimed to create a high-tech, luxury experience. 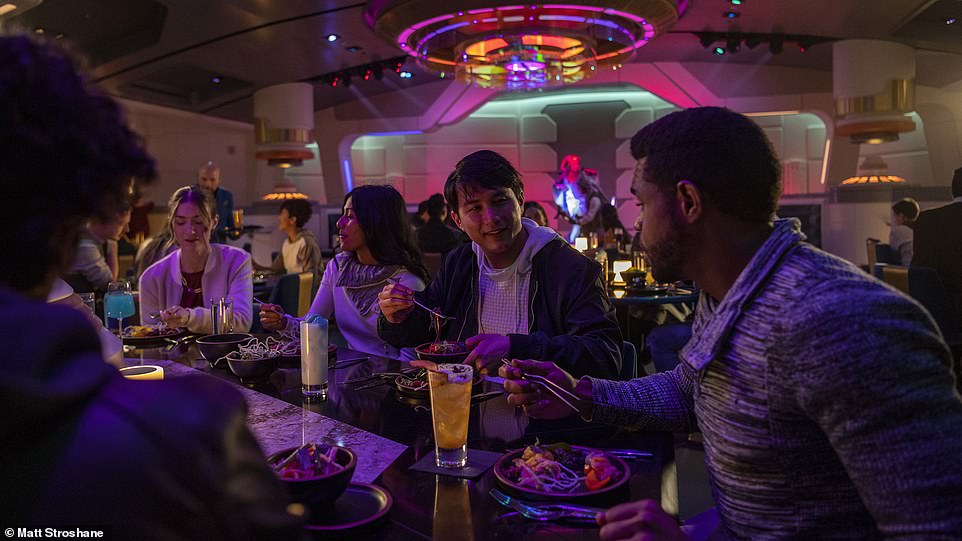 Guests in the Crown of Corella Dining Room. ‘If you want to lean in and wear some galactic finery and cosplay, it’s totally fine,’ says a Disney staff member 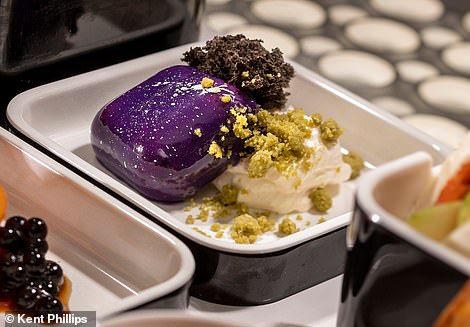 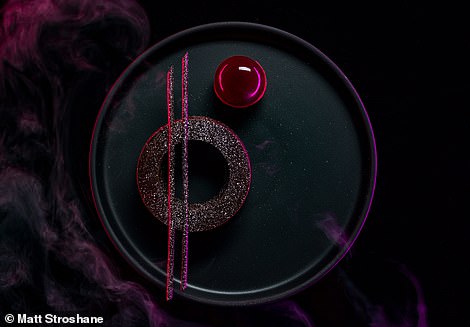 There will be ‘galactic-inspired’ food and drink offerings on the vessel. On the left is the lunch bento box that’s served on the Halycon, and on the right is one of the desserts that guests can look forward to trying during the immersive experience 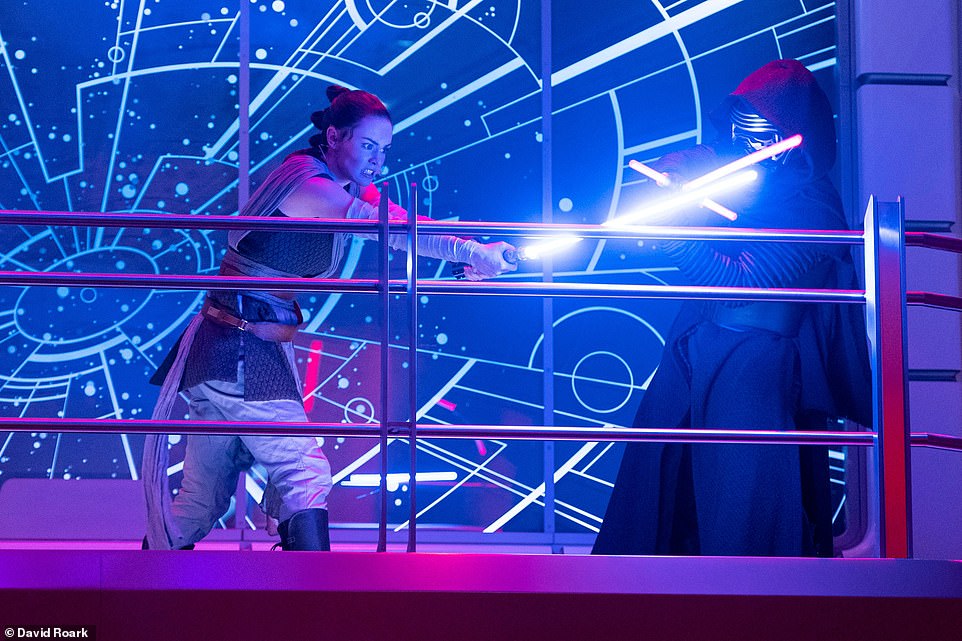 The Starcruiser is adjacent to Walt Disney World’s Galaxy’s Edge, one of two ‘Star Wars’ areas that cost more than $1billion (£759million) to create.

As Covid cases drop and health restrictions ease, crowds are returning to Disney parks. Revenue for the parks division exceeded pre-pandemic levels in the last three months of 2021.

With the Starcruiser, ‘there is a significant investment, not only in this particular version we are launching, but also in the technology and underlying capabilities we have developed,’ Trowbridge said. ‘We are bullish about expanding the ways in which we can engage with our guests.’