AS our flight touched down at Madeira’s spectacular Cristiano Ronaldo International Airport, the British holidaymakers on board broke into a spontaneous round of applause.

It wasn’t simply relief at safely arriving on the runway, which is perched on a foreland jutting out into the choppy Atlantic Ocean. 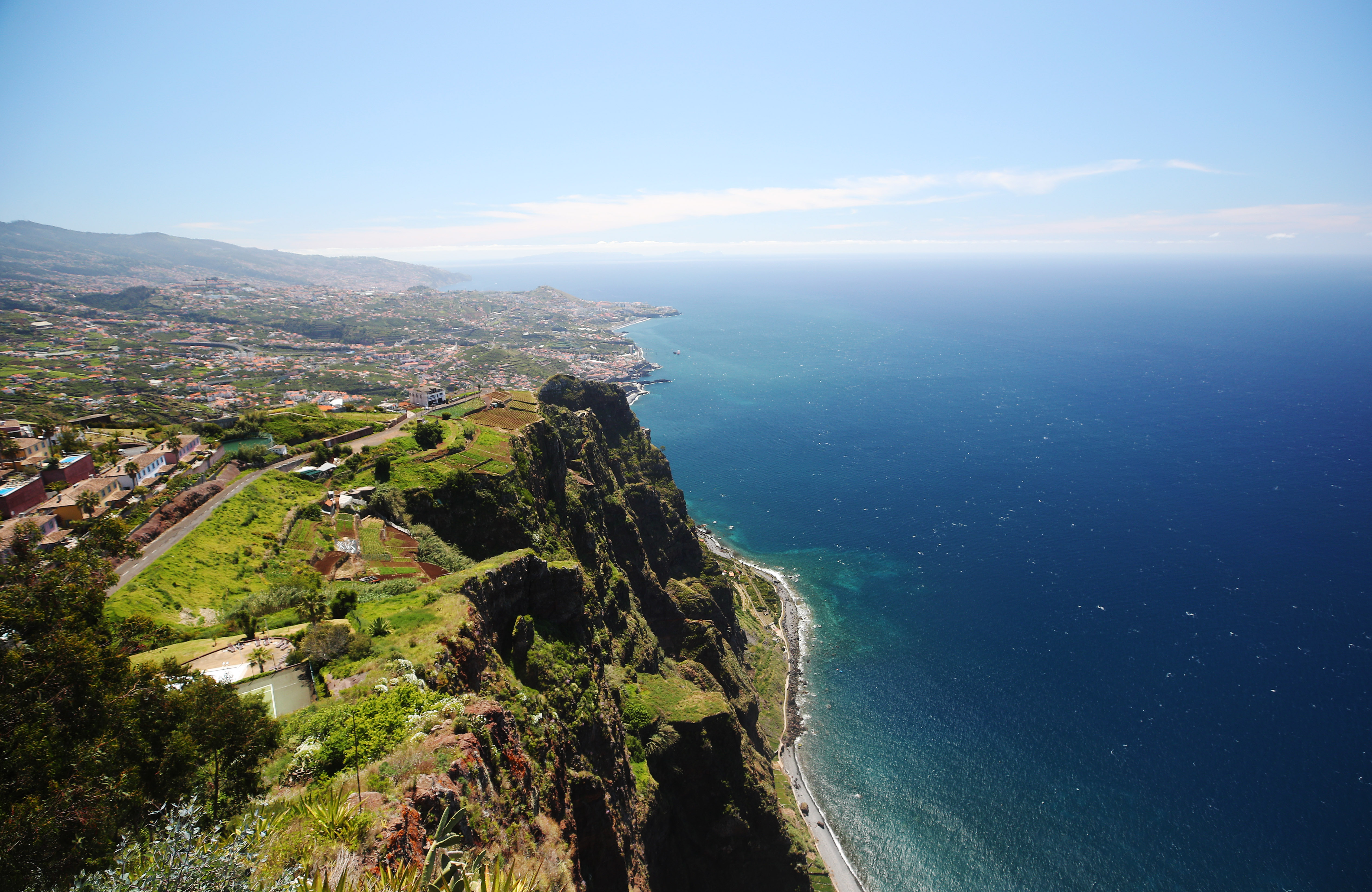 But rather, for many, it was sheer joy at finally being able to travel to a sunshine destination after months of grim lockdown.

For Madeira is on the UK Government’s green list — meaning it is one of the few destinations we can currently travel to without needing to quarantine on our return.

So what can you expect from these Portuguese volcanic islands 320 miles west of Morocco? Well, sunshine-bathed rocky beaches, rugged mountain scenery and some tropical hiking, if that’s your thing.

Or, if you’d rather, all-inclusive resorts where you can kick back by the pool with a cold drink. Most British travellers I met simply wanted to relax in the 23C sunshine after months of pandemic gloom.

Ali Rogers, 55, and her partner Shaun Cunning, 57, from Locks Heath near Southampton, flew out with Tui for an 11-day break. Doctor’s receptionist Ali revealed: “We’re going to lie by the pool and relax in the sunshine. We want to de-stress.” 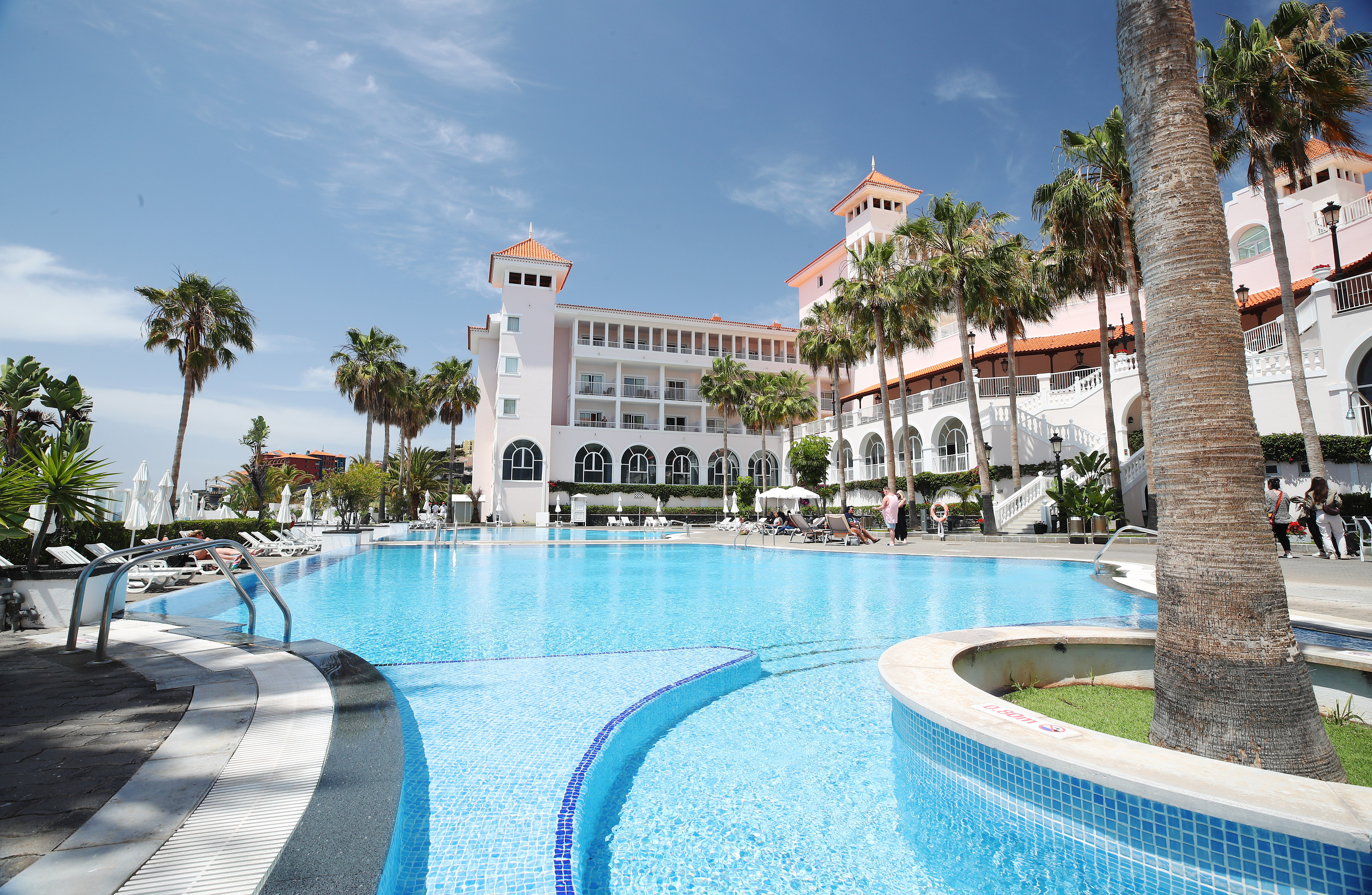 A reminder that this is a holiday, but not quite as you know it, comes straight away at the Cristiano Ronaldo airport. A statue of the legendary footballer — born on the island — has a Covid mask cheekily slipped over its face.

Making sure your Covid testing meets requirements is now as much part of a holiday as packing the sun cream.

To enter Madeira, you need proof that you’ve received two vaccination jabs — which can be displayed on the NHS app — or a negative “fit-to-fly” PCR test.

Coming back to the UK, you must take a lateral-flow test before your return flight plus an additional PCR two days after arriving home. It’s fiddly and can be expensive.

But sun-and-sea giant Tui, who I flew with last week, is offering cheap packages of tests costing between £20 and £60 per person for green-list countries.

Arriving in Madeira, I simply showed my negative fit-to-fly certificate downloaded on to the Madeira Safe website as I exited the baggage area and I was then out in the sunshine 22 minutes after disembarking the plane.

You can also get a test done on arrival at the airport and wait under quarantine in your hotel room for the test result if you’d rather. 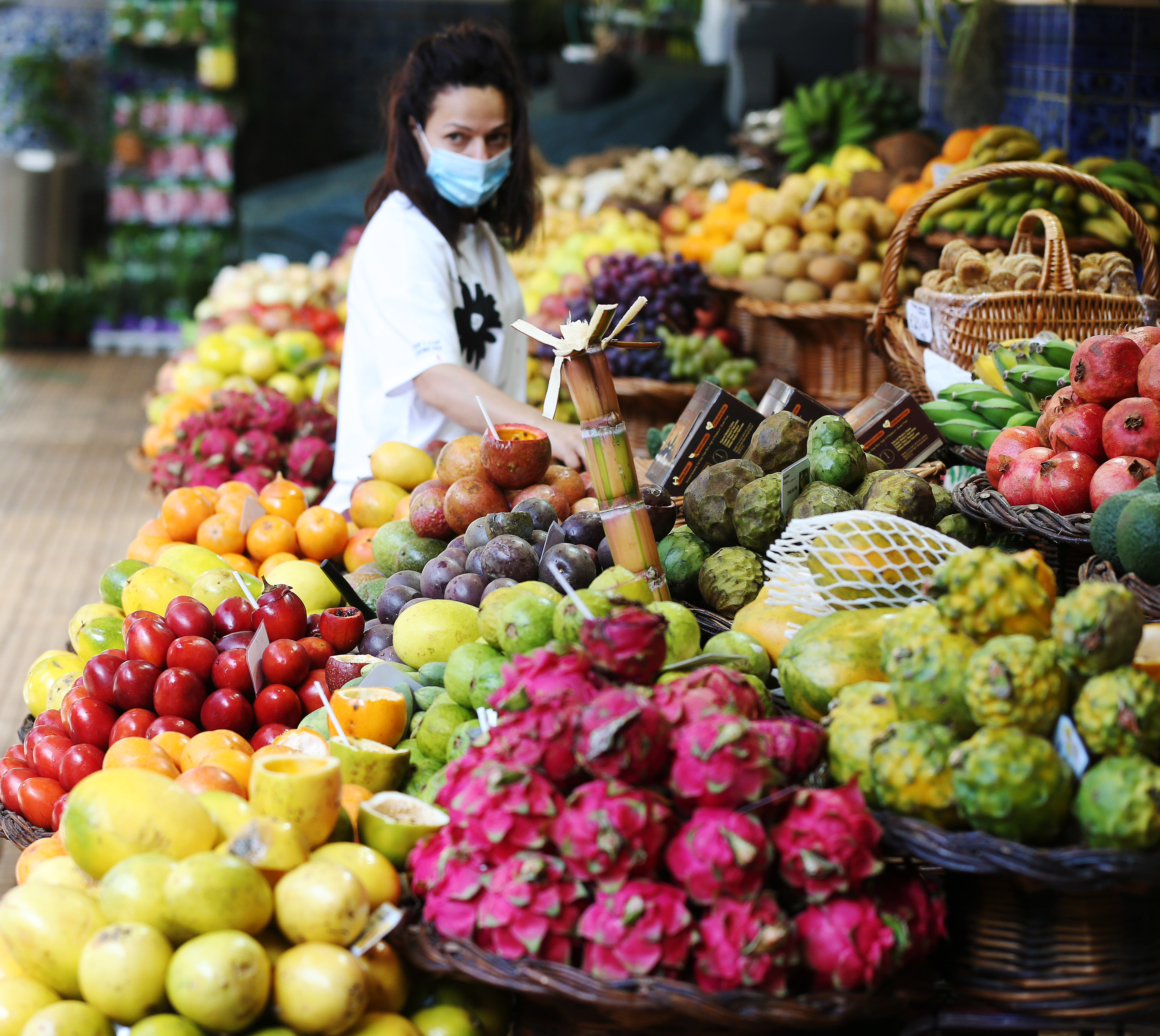 Nicknamed the “island of eternal spring” for its year-round clement weather, Madeira — a three-and-a-half hour flight from the UK — has long been a British holiday staple.

There was a mix of holidaymakers on my flight, ranging from older couples to families with teenage children. Soon we were being greeted with a glass of the local fortified wine at the four-star, all- inclusive Hotel Riu Palace Madeira.

You can check in remotely using an app and are handed your keys by a masked receptionist. The keys are inside an envelope along with a welcome pack.

From my room I could hear the comforting sound of rolling Atlantic breakers crashing against the beach below. At the hotel’s buffet lunch, each diner picked up their own tongs to serve themselves before depositing the implement in a basket.

Afterwards, many people were content to simply soak up the sun next to the two outdoor pools. But there’s plenty to do if you fancy an excursion. 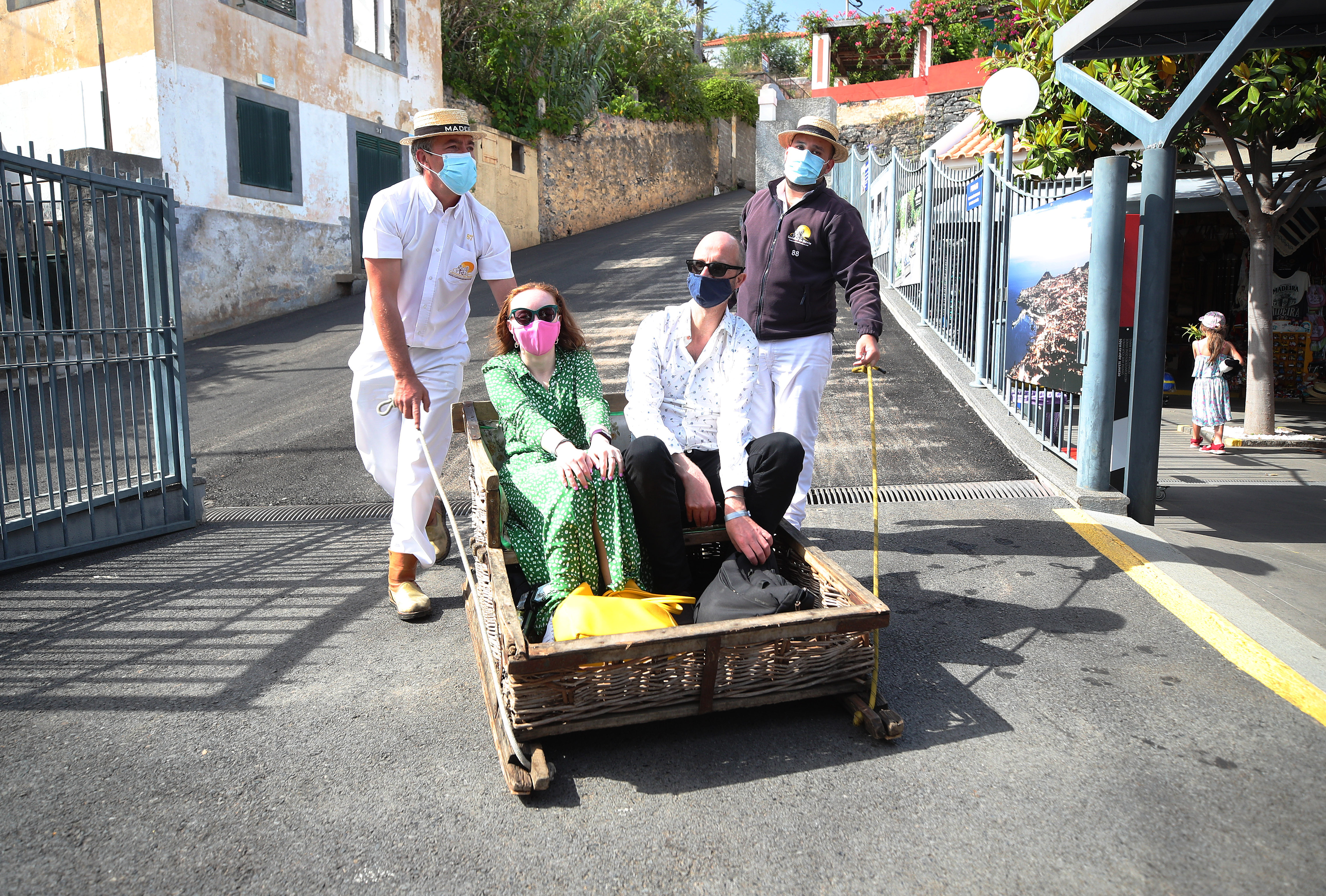 The bustling farmer’s market, Mercado dos Lavradores, is worth a visit. It is an exotic blend of fruit, vegetables, flowers and fish that is proof of Madeira’s tropical climate.

From the old town, you can take a scenic cable car on a 15-minute ride to the hillside suburb of Monte. Then you can descend on one of the famous wicker toboggans, piloted by two straw-hat wearing drivers who expertly use their boots as breaks as you career 1.2 miles downhill at up to 20mph.

A bus journey out of the city reveals a tropical paradise of craggy peaks and plunging sea cliffs. The mountain air is pine-fresh and herb-scented. At stunning Cape Girao, the world’s second-highest sea cliff, a glass-floored viewing platform offers jaw-dropping views of the beach 580 metres below.

COVID: On the UK Government’s green list. Proof of double vaccination, a negative PCR or recovery from cornavirus within 90 days is required by Madeira. You will need a lateral flow or PCR test to re-enter the UK as well as a PCR test on day two, with Tui offering discounted tests for travellers from £20.

GETTING/STAYING THERE: Seven nights’ all-inclusive at the 4H Hotel Riu Palace Madeira is from £787pp when booked online, including flights from Gatwick on July 12 and transfers. Book at tui.co.uk or visit your local Tui holiday store.

Dinner at the restaurant Vila da Carne, five miles outside Funchal in picturesque Camara de Lobos, is a carnivore’s dream. Espetada — grilled beef on a long skewer — is brought to the table with delicious local garlic flatbread by masked waiters.

Alentejo red wine makes for the perfect palate combination. Madeira has had low Covid infection rates and its strict safety guidelines aim to keep it that way.

Tourists have to wear masks at all times unless eating or drinking, on a sunbed or in the pool, while restaurants and bars are operating a strict 10pm curfew.

Poolside at the Hotel Riu Palace, the resounding verdict is that those cheers on arriving on the plane in Madeira weren’t misplaced, despite the Covid rules.

“It’s worth it to be here,” said one couple from Manchester nestled among their fellow British tourists on sun loungers.

Little wonder, then, that Tui has added extra summer flights to Madeira from Gatwick, Manchester and Birmingham. Madeira is ready to welcome them.