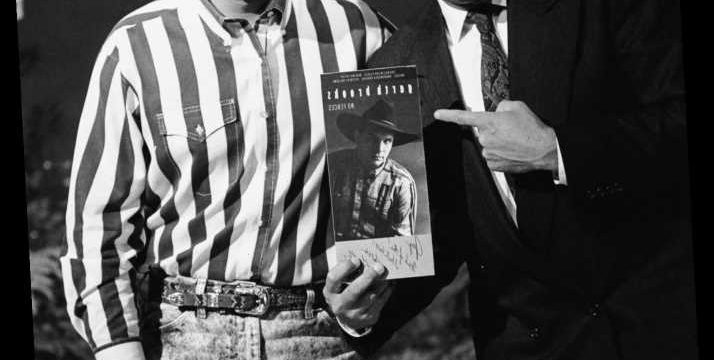 Wynonna Judd, Brooks and Naomi Judd get together at the Love Is Feeding Everyone Country Christmas Benefit in December 1990 at the Universal Ampitheater in Universal City, California. Following a successful night of wins, Brooks hits the 26th Annual Academy of Country Music Awards red carpet in 1991 to pose with his awards. A young Brooks poses with George Jones backstage at Fan Fair in June 1991 in Nashville. Actress Marlee Matlin and Brooks kick off Super Bowl XXVII in 1993 by performing the national anthem together in Pasadena, California. The star poses backstage before a show in April 1994. Then-New York City Mayor Rudy Giuliani presents Brooks with a custom Yankees baseball uniform during a 1997 press conference on the roof of the Arsenal Building in Central Park. A casual Brooks and Yearwood hang backstage in January 1998 at the 25th Annual American Music Awards in L.A.

Brooks reunites with Jay Leno in March 1998 on The Tonight Show with Jay Leno, alongside guest star Fran Drescher. In addition to music, Brooks acted on his passion for baseball and played for the Kansas City Royals. Here, the star waits in the on-deck circle for his turns against the Texas Rangers in 2004. The loving couple poses with Mickey Mouse during a trip to Disneyland in 2005.

Wife Trisha Yearwood gives a big birthday shoutout to her “best friend” and husband in 2018.