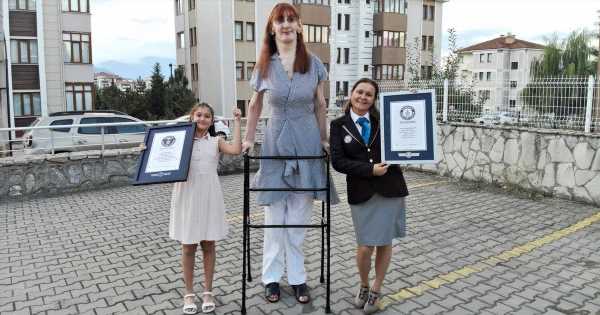 The world's tallest woman wants to "empower" and "inspire" people as she said it's "unique" to be her height.

Rumeysa Gelgi, 25, measures 7ft 0.59in and holds a Guinness World Record for being the "tallest living woman".

Originally from Turkey, but now living in the US, Rumeysa received the award in 2014 when she became the tallest teen alive at 17.

In May 2021, she picked up another record after measuring her height once again when reaching adulthood.

Now after living with Weaver syndrome, a rare genetic condition which causes bone overgrowth, Rumeysa wants to empire others with visible differences.

She said: "Being so tall has both amazing and awful sides, it can make you multiple world records holder and wheelchair-bound at the same time.

"I am one of those people who focuses on the positive sides and makes the most of it. It makes me insanely unique and I love it. Plus, [being so tall] is awesome when you go to a concert or cinema."

Rumeysa's suffered as a result of her height, but she focuses on the good.

She continued: "I've had to have serious surgeries and treatments to fix these [issues]. I am using a wheelchair most of the time and can only walk with a walker."

Sadly for Rumeysa, she was also picked on about her height.

She added: "I also was bullied when I was younger because of the differences Weaver syndrome has brought me."

However the Turk said there are positives which come from it.

"I am still taller than most people while I am sitting, so I can reach higher places easily and help them," she admitted.

Despite the positives, Rumeysa claimed the downside is that she can't find clothes to fit her because she wears dresses as tops.

Luckily, she has a support system behind her.

Rumeysa said: "[My family and friends] are always motivating and helping me to reach my goals.

"I owe my positive attitude to my parents, to an approach that they taught me when I was so young. I am so grateful for having them in my life.

"Even most of the public are very kind and lovely. There have been times that I encountered awkward reactions, especially when I was young.

"However, after I received my first ever Guinness World Records title in 2014, people started to show me their appreciation and encouragement.

"I am hoping to inspire and empower others with visible differences and make them realise that they are not alone in their journey."