Prince William and Prince Harry have not spent much time in one another’s company over the last couple of years, but over the past week, the two brothers have attended several of the same arrangements ahead of Queen Elizabeth II’s state funeral on Monday. Express.co.uk spoke to Relationship Expert, Tina Wilson about the brothers’ body language.

The Duke and Duchess of Sussex joined the new Prince and Princess of Wales last weekend on a walkabout outside Windsor Castle to greet members of the public who had laid flowers and tributes for Her Majesty.

Tina said: “The display of unity at Windsor last Saturday shows there is still a bond between Prince William and Prince Harry despite having a fractured and rocky relationship over the past few years now.

“The first outing together since 2020 could in fact be the start of the brothers trying to rebuild their broken relationship and not just an olive branch on William’s behalf.

“There were several signs that could indicate they are both willing to try, although time will tell. 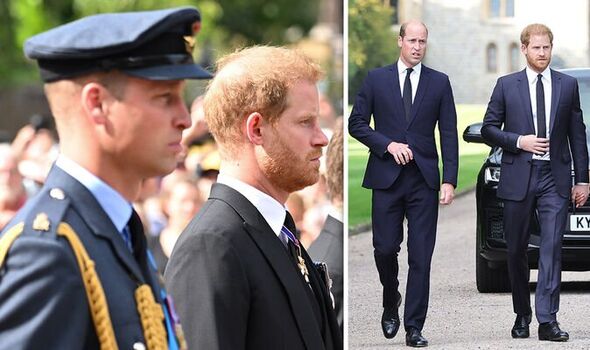 “Prince Harry jumped out of the car first and engaged straight away indicating his eagerness.

“But he still let Prince William lead the formal introductions, showing that he respects Prince William’s position and authority.

“Prince William took the lead in introducing everyone which he looked like he appreciated.

“The brother’s also often mirrored each other’s body language showing they are in sync with each other,” she added referencing the two Princes’ holding down their ties, and buttoning their jackets up.

“Despite the sad circumstances, both brothers at times appeared chatty and comfortable in each other’s company.

“Harry looked pensive and had an icy exterior at times, but Meghan was on hand to comfort him, and the husband and wife showed their usual affection and solidarity by holding hands.

“The brothers subtly took cues from each other before they walked to different sections which could indicate they chose to stick together on the outing.

“Although one could say this could have something to do with wanting to do what was right for the cameras. 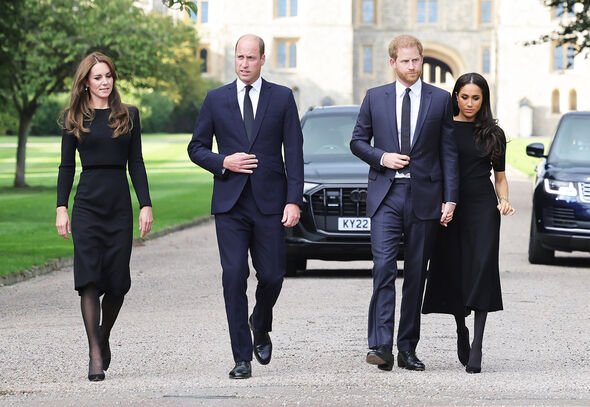 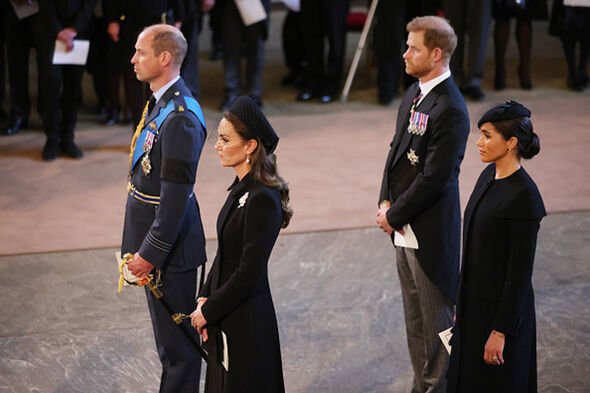 “But they still could have easily drifted off and met up at the end of the walk around if they were stubborn about it,” the expert explained.

“The brothers appeared to want to show a united front despite what may be happening behind the scenes.

“It looked a little awkward at times, but you can see it meant a lot for both to be there together.”

Tina continued: “In terms of wives, Meghan kept her distance initially, particularly when she exited the car and she seemed timid and nervous, whereas Princess Catherine displayed a confident and bold approach, and she took charge next to Prince William.

“Catherine led the group to some extent,” she suggested.

“Grief often does bring families closer together. I’m sure they would be very aware the late Queen would be overjoyed that she could play a part in the building back some kind of relationship.”

Tonight, Prince William and Prince Harry join their six cousins for a vigil in honour of their grandmother.

The vigil is expected to last around 15 minutes.