Like many Melburnians, Ying-Lan Dann has long been fascinated by the Mission to Seafarers, in Docklands. When she was invited to create a work in response to a building as part of this year’s Open House Melbourne, she knew immediately which it would be. 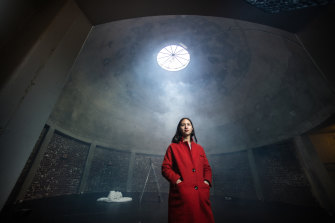 Ying-Lan Dann inside the dome at the Seafarer’s Mission, the building she chose to respond to as part of Open House Melbourne.Credit:Simon Schluter

Taking a peek behind the closed doors of some of Melbourne’s finest and most interesting buildings is a core premise of the weekend event, now in its 15th year. During that time, the program has grown from half a dozen buildings to a 200-plus strong list that extends to Ballarat and Bendigo. “[It’s] much more expansive and citizen-led,” says Fleur Watson, Open House Melbourne’s executive director. “As a public festival, it has always had a spirit of generosity, this gesture of opening up and allowing visitors to come and look and experience things.”

Swinging open their doors at the end of the month will be some of the city’s finest mansions, including Villa Alba in Kew and Brighton’s Billilla, the Cairo flats in Fitzroy, the newly renovated Jewish Museum designed by Kerstin Thompson, the Melbourne Quakers Centre, the Albanian Mosque in Carlton North and many more.

Considering how to approach the event this year, held remotely for the past two, Watson decided to explore beyond the traditional, with associate professor and director of curatorial practice at Monash University Tara McDowell. The two have co-curated an exhibition of works to run concurrently with the Open House program, called Take Hold of the Clouds. 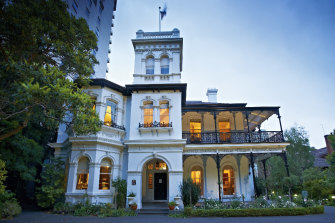 One of the few remaining Victorian era homes on St Kilda Road, Ulimaroa.

That’s where Dann’s work, Circular Temporalities, comes in, one of seven commissions around town in which local and international artists respond to chosen buildings or sites. A lecturer in interior design at RMIT as well as an artist, she is interested in time and finding different mediums to show things in flux and, having grown up on Phillip Island, she often uses water as a theme. 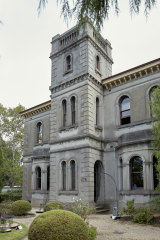 When she started spending time at the Mission, Dann found there was an oculus at the top of the dome, known as the Norla Dome. She thought about how that small but significant opening related to where sailors spent so many months of the year, the sky being the only thing they would see much of the time, stars guiding the way in times gone by, and of the recent stories she’d heard about sailors being trapped at sea during COVID.

Built in the Arts and Craft style between 1916 and 1919 and designed by architect William Butler, the Mission includes a chapel, clubroom, Chaplain’s house, a small cottage and the Norla Dome, which was apparently inspired by the Pantheon. The Mission was funded by the government and the Ladies Harbour Lights Guild, who Dann was also intrigued by. “One of the things those women identified is that life at sea is very dangerous [and they] wanted to give them a space of sanctuary and support,” she says, adding that for many years, the dome was used as a gymnasium.

Her work inside the dome includes a 35-minute loop film, recorded from the ferry during the crossing from Queenscliff to Sorrento. The horizon takes up about a third of the shot and moves as the waves rise and fall, mirroring the journeys made by the sailors who found refuge at the mission over the years; it will be projected onto a gauze-like fabric, allowing glimpses of the building behind. Dann also plans to activate the site over the course of the weekend and will read a poem by Justin Clemens. 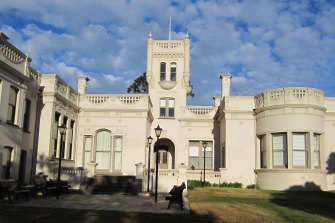 Brighton’s Billilla is part of Open House Melbourne for the first time in 15 years.Credit:Courtesy of the Bayside Council Collection

Others works commissioned to respond to key sites include African-American artist Cauleen Smith at the Melbourne Quakers Centre; Forensic Architecture at The Capitol RMIT University; Alicia Frankovich at the Brunswick Baths; Julia McInerney at Villa Alba Museum; Kent Morris at the St Kilda Foreshore Vaults; and Snack Syndicate, comprising Astrid Lorange and Andrew Brooks, at the Victorian Trades Hall, where they will recreate the radio station 3KZ in its former home.

Watson says the exhibition deliberately uses the city as a gallery, moving outside a traditional gallery space and distributing it across seven sites, including iconic buildings and also in between.

For McDowell, the works ask us to think about the “unbuilt” aspects of our built environment. One highlight is Cauleen Smith’s 2018 video Sojourner. McDowell describes the acclaimed filmmaker’s work as “a stunning exploration of utopian thought and architecture”, on view throughout the weekend in the building she chose, Melbourne Quakers Centre. “Smith’s video and the Quakers Centre are both sites of belief in the power of radical generosity and community building – which we need more than ever before.”

Open House Melbourne runs July 30-31 and the full program is released on Thursday.