Max Arion says the laws that protect every other Victorian worker actively discriminate against sex workers such as him and put them in harm’s way.

Mr Arion, a licensed private sex worker, wants the state government to decriminalise the industry, saying it would dispel the fear that sex workers have about safely accessing justice.

“I have felt unsafe in terms of ‘what if something happened to me, can I go to the police?’” the 35-year-old says.

“And I think that tension isn’t there for a lot of other industries. If you’re worried that the law might be against you, or police might not believe you and you reporting a crime could have larger repercussions for you … it’s a very tight rope.”

In Victoria, street-based sex work is a crime but selling sex at registered brothels, escort agencies, or as a private sex worker is permitted under strict licensing conditions. However, to obtain a license, sex workers must register with the government’s Business Licensing Authority, which sex workers have said is dangerous and opens them up to discrimination.

The Age on Wednesday revealed the Andrews government was moving on decriminalisation of sex work in coming months with cabinet ministers currently considering legislative reforms that Consumer Affairs Minister Melissa Horne has said would protect sex workers and reduce stigma.

The decriminalisation push stems from a 2019 parliamentary review of laws governing sex work, which has recommended a full decriminalisation of the industry, including street-based sex work, and regulating it through the Occupational Health and Safety Act, with WorkSafe taking over from Victoria Police as regulator.

Sex workers say the regulation of the industry has not been significantly reviewed in Victoria for almost four decades, and its decriminalisation is long overdue.

“The Victorian licensing system does not give you a lot of agency around safety and the type of work that you do,” Mr Arion says. “And there are significant risk factors, or even long-term ramifications of registering as a sex worker on the government register.”

The regulations and rules are so complex, sex workers say many are forced to work outside of the law, risking a range of fines, and even jail.

Heidi Olsen, a 28-year-old sex worker, has described Victoria’s licensing system as discriminatory, and one that “enshrines whorephobia” in law.

“The decriminalisation of sex work is the model that is best able to uphold human rights of sex workers and to ensure our health and safety,” Ms Olsen said.

“The system in Victoria is inherently discriminatory and for me, as a sex worker, it reduces my ability to make choices about my work that are in my best interests. So, for example, if I want to work for myself and I don’t want to have anyone telling me how to work, when to work, then I have to out myself to the government and that puts me at risk of who can access that information, will privacy laws be changed retrospectively, can it be accessed via freedom of information.”

For Ms Olsen, the concept of decriminalisation is very simple: removing all laws and regulations that criminalises any form of sex work.

This, she says, will be the first step in reducing stigma, giving sex workers more autonomy over their lives, and empowering them to seek justice and ask police for help without fearing prosecution. 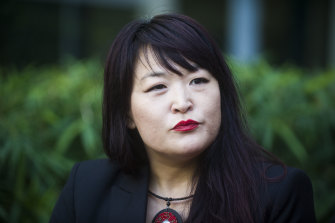 “The system makes it hard to reach out when you need help, and there’s the fear that if I go to police, will I just be laughed at because I’m a sex worker … or mocked and told no one’s going to believe you because you’re a whore.”

Jules Kim, the chief executive of national peak sex worker organisation of Scarlet Alliance, said the decriminalisation of the industry in Nsw, albeit not perfect, has had a positive impact on sex workers, enabling them to better access justice, healthcare and workers’ rights.

“When there’s a licensing framework, it again says we need to be treated differently because like somehow we’re not subject to the same rights, responsibilities and protections as other workers in other industries.”

The Andrews government is likely to release its draft bill by the end of the year, and while its proposed legislation remains unclear, it is likely to gain enough support in the upper house to decriminalise sex work.

The Opposition refused to state its position on decriminalising the industry, but in a statement a spokesman said: “We would have to see the proposed bill before the made comment or decided on a position”.

A spokesman for Shooters and Fishers MP Jeff Bourman said Mr Bourman was not in a position to disclose his stance because he had not seen the bill or heard about the government’s plans until this week.

The Age contacted the Justice Party about its position on decriminalisation.

The Australian Adult Entertainment Industry, an industry association representing the owners of 87 licensed brothels and five licensed escort agencies, are advocating for the decriminalisation of sex work to level the playing field and remove the onerous regulations and exorbitant licensing fees that has made the industry so “business unfriendly”.

As part of its submission to the review, it has urged the government to not allow more than the existing number of brothels or escort agencies to operate at least until 2050.

“We cannot find anyone who thinks the current laws that control the brothel and escort agency industry are any good,” said William Albon, the association’s spokesman.

“They are in fact no good. The Prostitution Control Act when it was written 26 years ago was a bold social experiment. But by almost every measure it has failed.”

The current laws have allowed “illegal brothels to get out of control”; made it difficult for brothel owners to sell their businesses as it can take up to three years for the purchaser to obtain a license; forced business owners to tell the Business Licensing Authority when they intended to take a holiday; and made it impossible to advertise.