Real change is slow, and particularly so if you’re impatient for it.

But the appearance of two young women impatient for change at the National Press Club on Wednesday felt like a true shift, a rare moment when progress becomes flesh and bone, and sneaks into the halls of the establishment to thunder and crack wise. 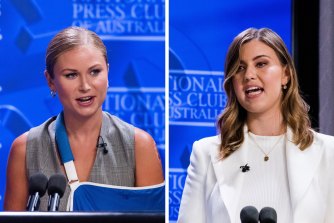 Who let them in? No one did.

Brittany Higgins and Grace Tame braved their way there, and on Wednesday, ministers, Opposition MPs and members of the press sat beneath them, listening, as these two extraordinary young women commanded a pulpit usually reserved for ministers and governors and sundry other men of gravitas.

And boy, did they command it.

Higgins went first. She led with the brutal fact of why she was there, her allegation that she was “raped on a couch in what I thought was the safest and most secure building in Australia”.

Higgins delivered the most memorable line of the day when she described her reaction to Prime Minister Scott Morrison telling reporters he had deferred to his wife Jenny in responding to Higgins’ allegation.

Morrison’s wife famously asked him to consider: “What would you want to happen if it were our girls?”

“I didn’t want his sympathy as a father,” Higgins told the press club crowd.

It was all about power.

The speeches of both women reminded us they have very different experiences, and very different styles, but their solidarity with each other is a source of power.

What they have in common is their drive to combat institutional power.

Higgins urged voters to look at the record of both parties in keeping their promises on gender equality and anti-family violence measures.

Tame outlined three concrete measures she wanted to see but also noted that after being criticised and “re-traumatised” by the mainstream media over the last year, she had nothing to lose.

“On that note… brace yourselves,” she said, to laughter – nervous in some quarters.

Tame said she had received a “threatening phone call” from a senior person at a government agency asking she play nice with the prime minister on the eve of the next Australian of the Year awards (recently passed).

Tame said this person told her, “You are an influential person. He will have a fear…with an election coming soon”.

Tame was scathing. She said this was “familiar” to her: “I remember standing in the shadow of a trusted authority figure, being threatened in just the same veiled way. I remember him saying, “I will lose my job if anyone hears about that, and you would not want that, would you?”

It was quite extraordinary – here was a former Australian of the Year likening the culture of political spin to the abuses of a predator.

“I have seen the patterns of deception and deceit performed by predators mimicked in our halls of power,” she said.

Morrison might not have made it down the hill for the speech, but he certainly did not escape it.

What is interesting is that Tame, while criticised for being much more political, has a far less politically threatening message than Higgins.

She doesn’t ask for wholesale change of parliamentary culture; she wants better awareness of child sexual abuse and the structures that enable it. Surely that is a bipartisan issue? 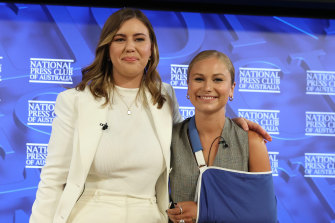 Brittany Higgins and Grace Tame got standing ovations for their speeches at the National Press Club.Credit:Alex Ellinghausen

It is Higgins who presents a grimmer danger for Morrison – she refreshed questions about what Morrison knew of the alleged rape that took place at the heart of his government.

She referred to the recent publication of text messages from Barnaby Joyce calling Morrison a liar, saying the context had been lost in the media controversy.

“What [Joyce] is implying is he didn’t believe the PM didn’t know about my rape,” Higgins said.

“It’s flabbergasting to me that that’s tolerated and that’s been made okay, and that’s somehow been sidestepped in all of this.”

It was poignant to hear Higgins speak fondly of her former job in politics. She had loved it, she said.

“It was the most fulfilling job I ever had.”

But she won’t be going back to it, she confirmed.

Long may they sit outside of it, just down the hill from Parliament House, rocking it from a distance.