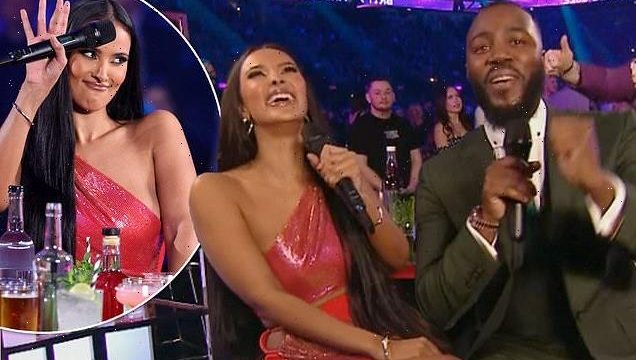 Maya Jama awkwardly addressed her engagement to Ben Simmons at the 2022 Brit Awards with Mastercard at London’s O2 Arena on Tuesday.

The presenter, 27, shut down her awards co-host Mo Gilligan, 33, when he commented on ‘that amazing rock on your finger’.

After walking the red carpet in a plunging black top with an unusually shaped front, that flowed into a matching skirt, Maya changed for the ceremony into a revealing red skirt with a thigh-high split and a matching cropped top, with Mo taking a seat beside her to quiz her on her jewellery. 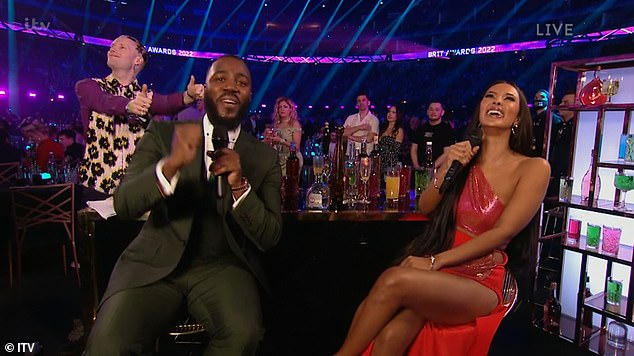 The comedian said: ‘Maya though, I can’t have you here without talking about that amazing rock on your finger. Listen, that is the size of a small studio, bedroom flat in London, I’m telling you. It looks fantastic though, you’re working it.’

Mo replied: ‘I’m really enjoying the vibes you know, I can’t lie. I’m enjoying myself so much.’ 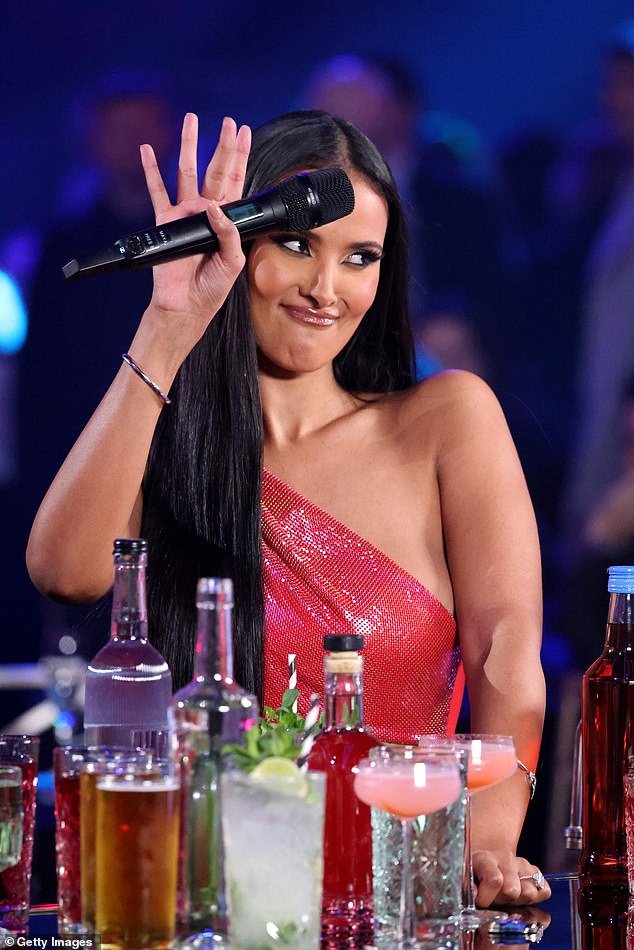 Hidden: The presenter shut down her awards co-host Mo Gilligan, 33, when he commented on ‘that amazing rock on your finger’, which she attempted to keep hidden during the ceremony 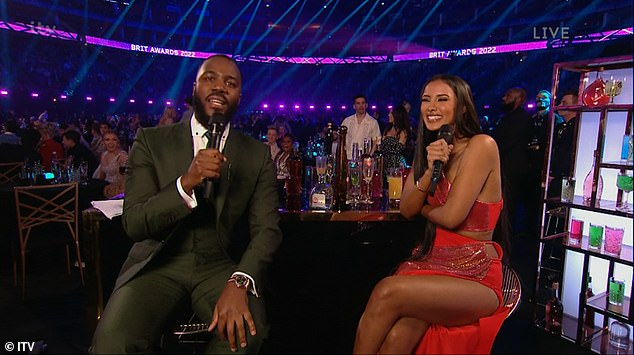 Shining stars: Maya changed for the ceremony into a revealing red skirt with a thigh-high split and a matching cropped top, with Mo taking a seat beside her to quiz her on her jewellery 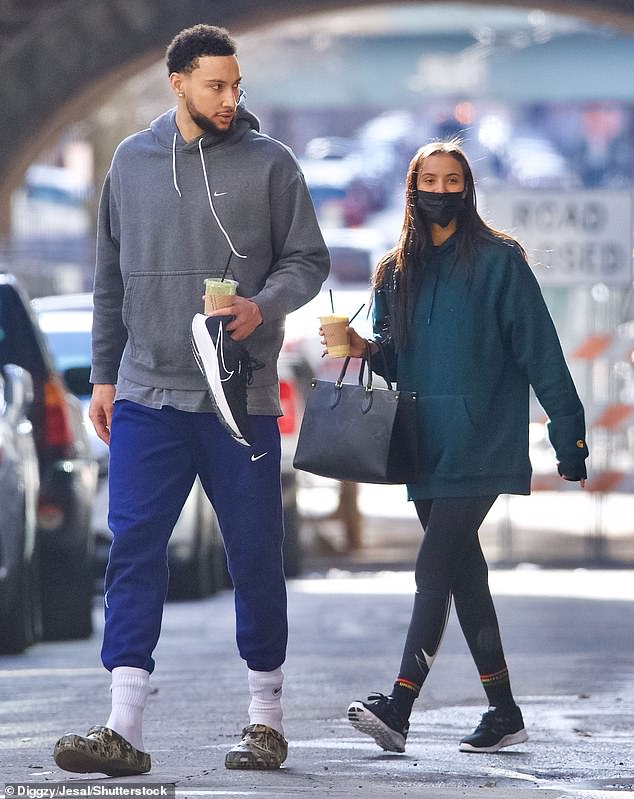 Close: The presenter confirmed her engagement to basketball player Ben Simmons in January

The star did her best to keep her ‘£600k ten-carat’ diamond ring hidden while sitting at the table, holding her microphone in her other hand.

Maya was reported to have got engaged to basketball player Ben, 25, over Christmas after seven months of dating after he proposed in his home country of the United States.

Last month, The Sun claimed the pair had only told close friends and family the alleged happy news. 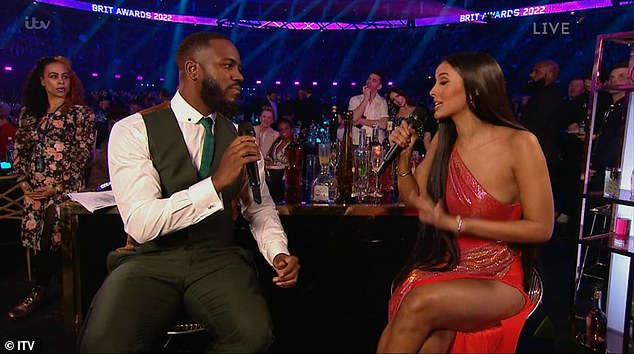 Maya spent Christmas at Ben’s £3.7million mansion in Moorestown, New Jersey and it’s rumoured she will relocate there following the proposal.

A source told the publication: ‘Ben adores Maya and has fallen head over heels for her. He picked up the ring on Jewelers’ Row in the diamond district of Philadelphia the day before he proposed.

They added: ‘Ben was so excited, but they’ve decided to keep the news low-key and tell only those closest to them. Maya flew to New Jersey to spend Christmas with him and is still there now. 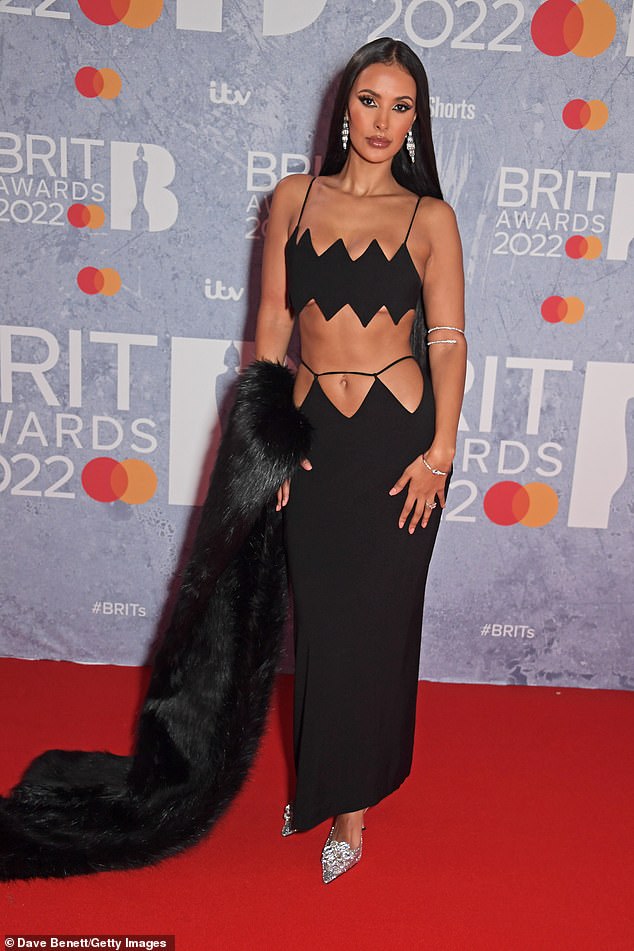 Revealing: Maya looked glamorous as she was among the first stars to arrive for the 2022 Brit Awards at London’s O2 Arena on Tuesday 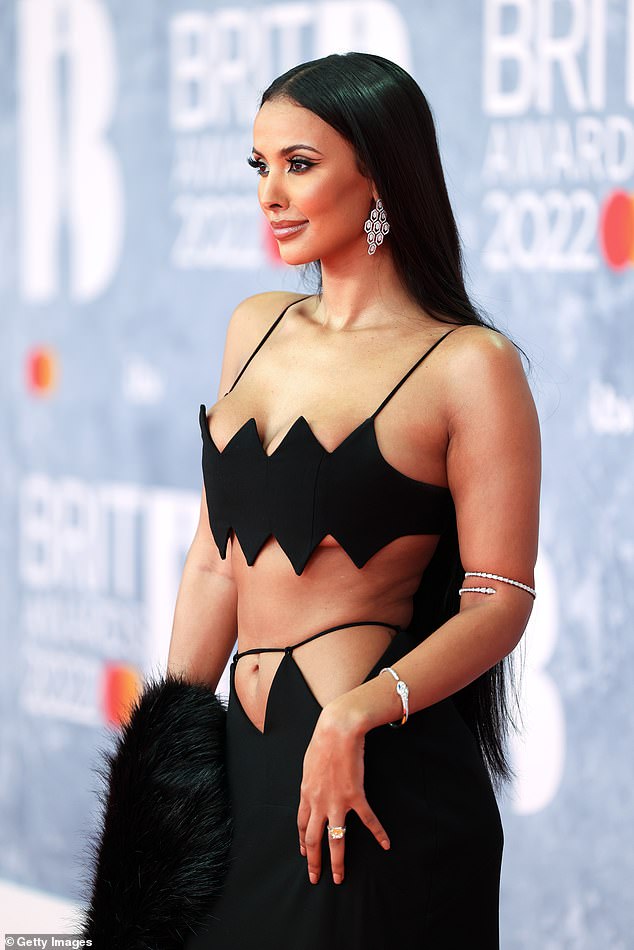 Gorgeous: The DJ who was one of the presenters during the star-studded ceremony, showed off her sparkling new engagement ring as she arrived

‘They had a small family gathering last weekend and announced their engagement.’

Earlier in the evening, Maya flashed plenty of abs and underboob as she walked the red carpet in her stylish black ensemble.

The star flaunted her impressively flat stomach in the co-ord from Mônot before her presenting gig for the evening.

The former Radio 1 star’s look included a barely-there zig-zag bralet teamed with a matching skirt, and wrapped up against the chilly weather with a matching faux fur stole. 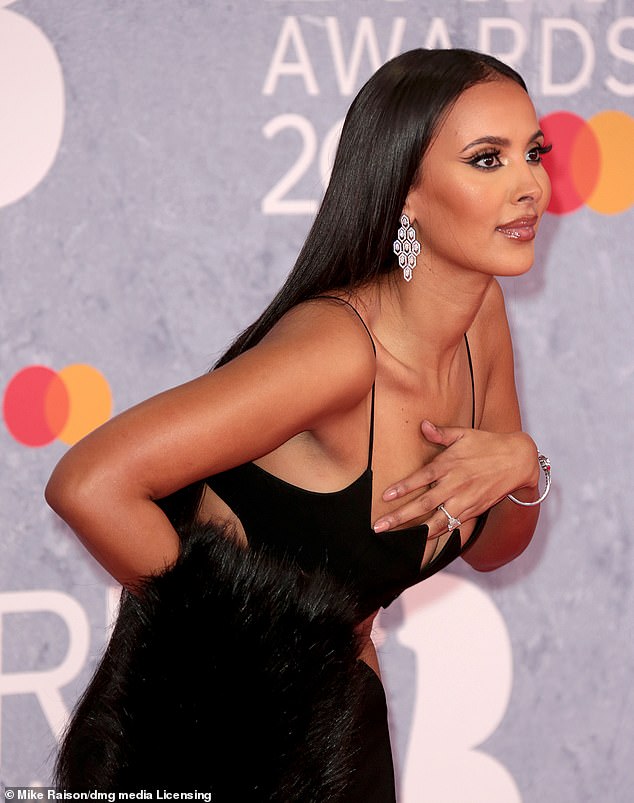 Wow! Maya struggled to contain her ample assets as she posed on the red carpet 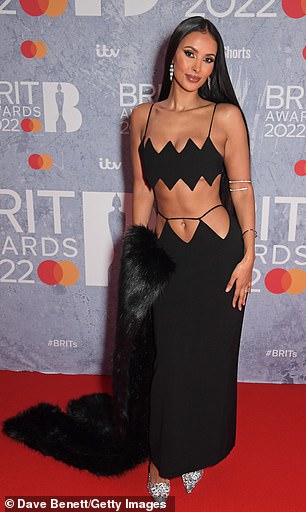 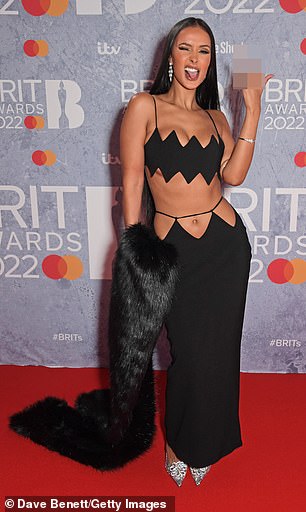 Flaunt it! Maya posed up a storm in the plunging black top with a zig-zag front, that flowed into a matching skirt that hugged her incredible figure

Adding a touch of glamour with pearl drop earrings, Maya finished her look with delicate silver bracelets and pointed-toe heels.

Maya debuted her jaw-dropping Brits look on her Instagram page, before hosting the spin-off red carpet show on ITV2.

It was a huge night for music at the Brit Awards on Tuesday evening – with Adele taking home three gongs at the O2 Arena, including in the first ever genderless Artist Of The Year gong after the male and female categories were scrapped.

The Easy On Me singer, 33, also won the award for Song Of The Year and the coveted Album Of The Year after being nominated for four gongs along with Ed Sheeran, who gave two performances on the night. 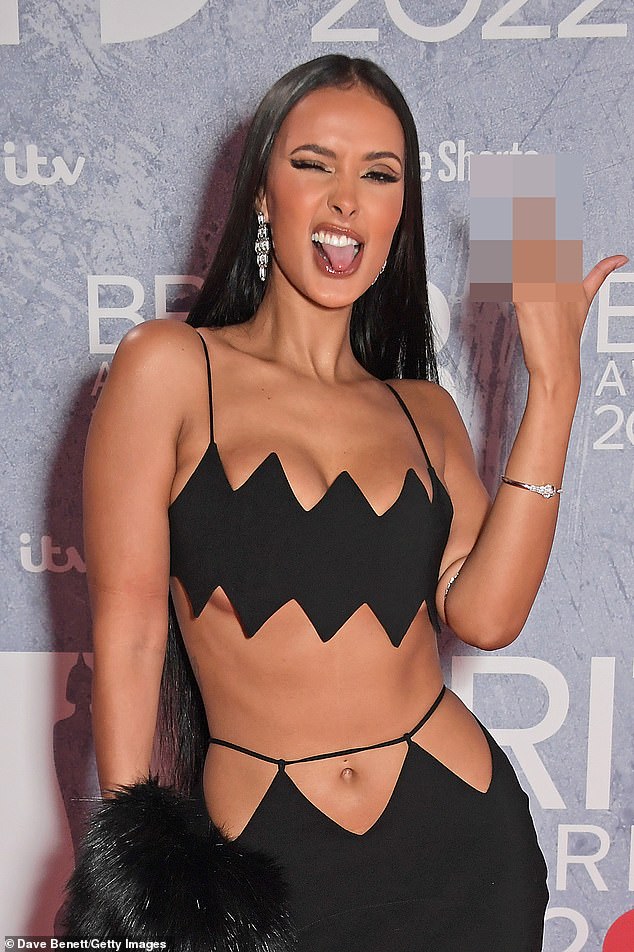 Pre-awards mood! Clearly in high spirits ahead of the ceremony, Maya flipped her middle finger for the cameras, offering a glimpse of her sparkling engagement ring

The ceremony kicked off at 8pm on ITV and was presented by Mo Gilligan for the first time, with Maya Jama hosting the red carpet.

The show got off to a bang with a spectacular theatrical performance from Ed with a new version of Bad Habits, for which he was joined by special guests Bring Me The Horizon.

With medleys and music legends at the heart of the BRITs on-stage performances, Anne-Marie – who fell over during her performance – and KSI along with Digital Farm Animals delivered a show-stopping three song set whilst rock royalty Liam Gallagher braved a helicopter to the O2 arena to perform his new single Everything’s Electric.

The 2022 BRIT Awards was truly Adele’s night and she performed a stripped-back version of her power-ballad I Drink Wine before winning three awards, bringing her complete tally of BRIT trophies to 12 since winning the first ever Rising Star award in 2008.

Adele was presented with the prestigious Mastercard Album of the Year for the third time, having won for her previous two albums in 2012 and 2016 – the only solo artist in BRITs history to have won this award three times.

The songstress also became the first ever recipient of the BRITs’ inaugural Artist of the Year award, with her third victory claimed with the win for Song of the Year for Easy On Me.

The International counterparts to these new categories similarly saw two unbeatable global artists celebrated; with Billie Eilish picking up International Artist of the Year and Olivia Rodrigo presented with International Song of the Year for Good 4 U – the biggest selling international single of the year in the UK.

Making her BRITs debut both on stage with an electrifying two-song performance, and in this year’s shortlists, Little Simz was presented with Best New Artist, beating off competition from Central Cee, Griff, Joy Crookes and Self Esteem.

She was joined on stage by actress Emma Corrin. The Mercury Prize winning London band Wolf Alice won Best Group, the second year they had been nominated in this category. 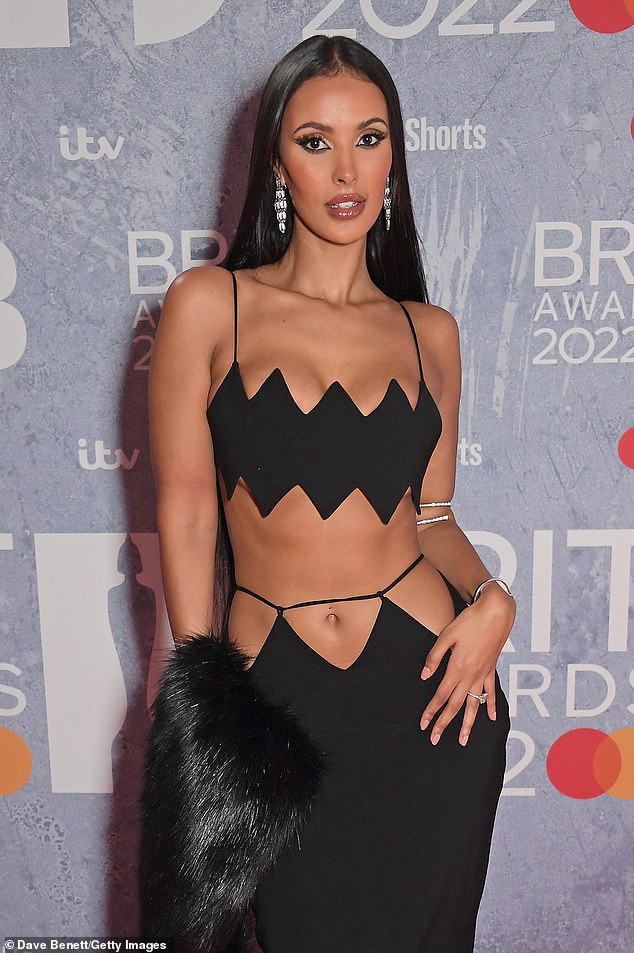 What a result! After receiving the massage, Maya proudly displayed the results of the treatment as she showed off her washboard abs

The 2022 BRITs Rising Star shortlist saw three incredible female artists compete for the coveted prize, as chosen by critics and heads of music to identify the future stars of British music.

Winner Holly Humberstone got to perform to her biggest audience yet with a rendition of her new single London is Lonely, and was introduced on stage by last year’s Rising Star recipient, Griff.

The BRITs in 2022 saw a number of changes to awards categories in order to create even more opportunities for artists to be recognised.

The recipient of the BRITs’ first ever Songwriter of the Year award tonight went to Ed Sheeran before he performed a second number, The Joker and The Queen later in the show.

Having picked up two awards last year, Dua Lipa, was awarded with Pop/R&B Act, and having received her first ever BRIT nominations this year Becky Hill was awarded Dance Act.

Alternative/Rock Act went to Sam Fender (bringing his UK record label Polydor’s tally of trophies up to 5), who later in the show went on to wow the audience with a performance of his Top Ten hit single Seventeen Going Under.

British rap royalty Dave was presented with the award for Hip Hop/Grime/Rap Act by Arsenal legends Ian Wright and Bukayo Saka, and closed the ceremony with a triumphant performance of In The Fire, where he was joined by fellow rappers Ghetts, Giggs, Fredo, Konyikeh and Meekz. 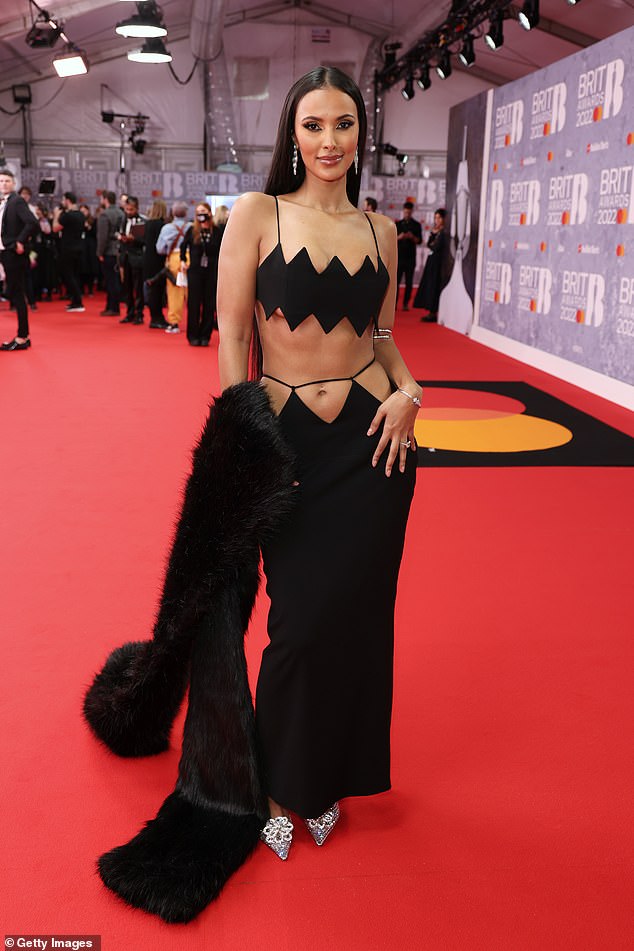 Show it all off! She left little to the imagination in the revealing black ensemble, having been among the first stars to arrive for the red carpet

ARTIST OF THE YEAR

SONG OF THE YEAR

Adele – Easy On Me – WINNER

Central Cee – Obsessed With You

MASTERCARD ALBUM OF THE YEAR

Dave – We’re All Alone In This Together

The War On Drugs

Billie Eilish – Happier Than Ever

Lil Nas X – Montero (Call Me By Your Name)

Maneskin – I Wanna Be Your Slave

The Weeknd – Save Your Tears

PRODUCER OF THE YEAR

SONGWRITER OF THE YEAR