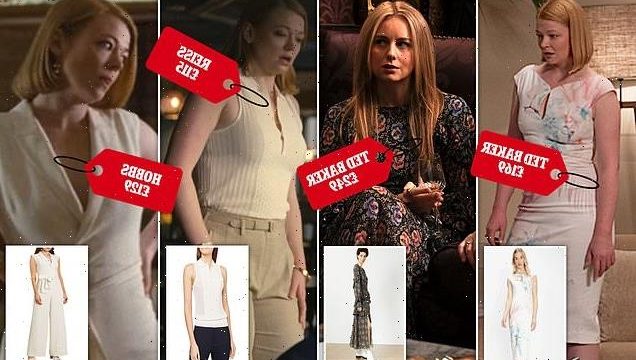 Succession is known for bringing the ‘stealth wealth’ designer wardrobe of the mega rich to TV.

But look a little closer and you’ll find some of the characters’ seemingly high-end pieces are actually bought from British High Street brands.

The wardrobe department seamlessly blends designer buys from Ralph Lauren Collection, Monique Lhuillier and Proenza Schouler with affordable finds from the likes of Reiss and Hobbs.

In the season 3 finale, for example, Shiv (Sarah Snook) wore an ill-fitting £169 Ted Baker dress to her mother Caroline’s (Harriet Walter) Italian wedding, pairing it with a chic hat and a pair of shoes.

In the season 3 finale, for example, Shiv (Sarah Snook) wore a £169 Ted Baker dress to her mother Caroline’s (Harriet Walter) Italian wedding, pairing it with a chic hat and a pair of shoes. Pictured, the Ted Baker dress on Shiv (left) and modelled on the Ted Baker website (right) 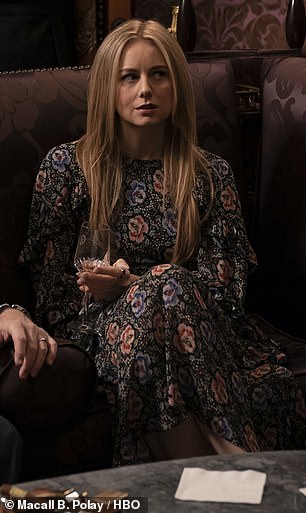 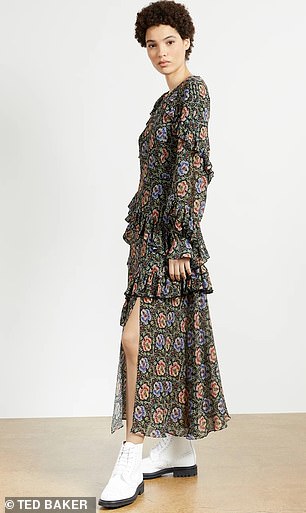 For a character known for sleek power dressing, the frumpy floral frock stood out and prompted viewers to take to Twitter to question the fashion choice. One noted there were ‘wrinkles and pulls’ in the fabric.

Meanwhile, one mother-of-the-bride posted: ‘Shiv wore the same dress to her mom’s wedding that I wore to my daughter’s wedding!’

It’s not the first time the brand featured in the season.

The finds were shared on Instagram by fan account successionfashion, which is dedicated to tracking down the outfits worn by the cast.

Earlier, Shiv wore a $129.50 Club Monaco satin t-shirt in a deep wine colour, as well as a £115 sleeveless knitted top from Reiss. 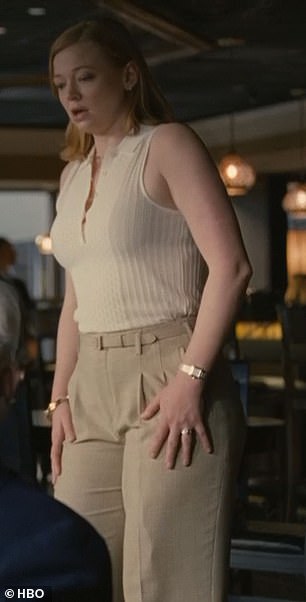 Shiv wore the £115 Reiss Angelo Textured Top (right) early on in season two, pairing it with a pair of beige high-waisted linen trousers. The knitted top is now sold out 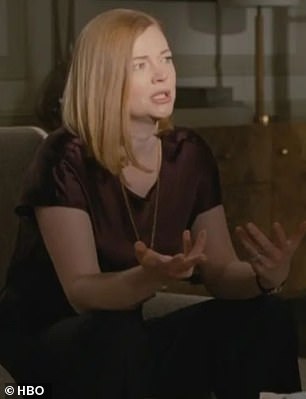 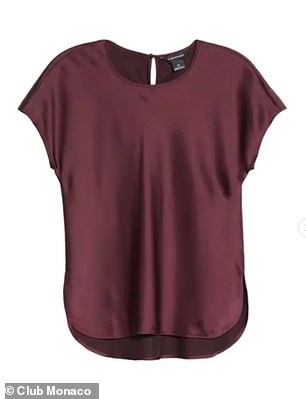 Perfectly polished, Shiv wore the Club Monaco top in a deep wine colour in episode four. Right, the top on the Club Monaco US website. It is now sold out and is not available in the UK 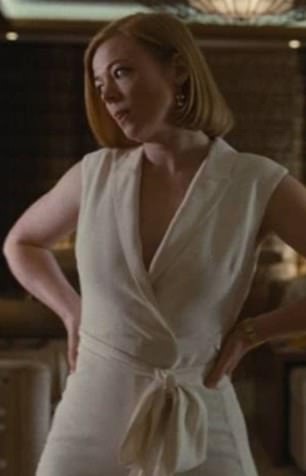 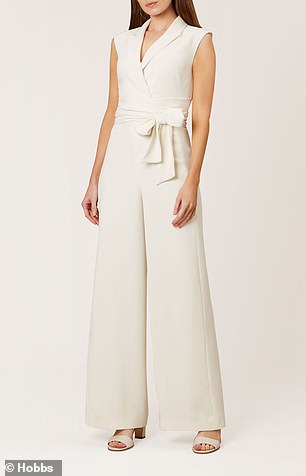 The love for British high street pieces isn’t restricted to this season: in the final episode of season two, Shiv stunned in a white jumpsuit from Hobbs – now on sale for £129 (right)

In both cases, the tops were styled with power trousers typical of the character’s wardrobe.

The love for British high street pieces isn’t restricted to this season: in the final episode of season two, Shiv stunned in a white jumpsuit from Hobbs – now on sale for £129.

In each case, the pieces fit in to costume designer Michelle Matland’s ‘anti-bling’ vision for the Roy’s wardrobe.

Yes, they wear high-end labels, but not in the sort of obvious way of the nouveau riche or Instagram millionaires.

Instead it is quietly expensive: an exquisitely tailored suit for Logan or Shiv’s sophisticated separates from the likes of Gabriela Hearst, Max Mara or Loro Piana.

Style evolution: In series one Shiv (left), with her long auburn locks still in tact, was dressed in earthy, ’70s-inspired tones, accessorising with silk scarves and even baseball caps. Pictured, the character in a long brown coat, worn over teal trousers. Right, a £269 Massimo Dutti coat

Relaxed and oversized: In the pilot episode, Shiv’s separation from her family was illustrated by this low key outfit of an H&M Fair Isle sweater, maroon trousers and a well worn baseball cap. Right, popular Fair Isle knits can be found at every price point, including this £29.99 Zara style

Shiv has become something of a poster girl for modern power dressing. She is confident, sleek and wears colours that are quietly eye-catching.

‘Shiv’s clothing is powerful, classic, strong corporate, yet approachable due to the tones being a perfect fit for her hair and complexion,’ explained sylist Rachel Gold. ‘Plus the soft textures bring an element of femininity.’

The wardrobe is dominated by suits, turtlenecks and discreet jewellery that screams luxury.

But while the media scion can afford to step out in Ralph Lauren, The Row and Theory, shoppers without a billionaire’s budget can achieve her signature look by picking up key pieces at the likes of Massimo Dutti, Mango and Jigsaw.

‘Add ladylike jewellery and a slick of buttery rose hued lipstick and don’t forget to dig out those straighteners – you’ll need a sleek bob to show you mean business.’ 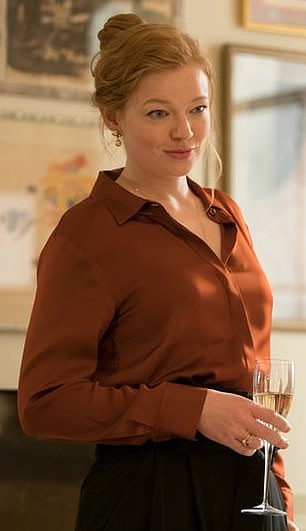 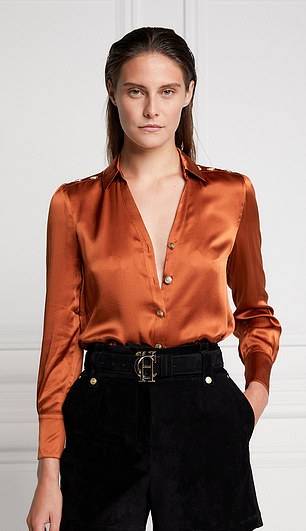 Autumnal tones: Shiv in a signature silk shirt in a burnt orange hue in series one. The shade was typical of her colour palette in the earlier episodes. Right, a Holland Cooper blouse, £199

Sophisticated: Succession’s Shiv (played by Sarah Snook) has become something of a poster girl for modern power dressing. She is confident, sleek and wears colours that are quietly eye-catching. But you don’t need a billionaire’s budget to recreate the looks at home. Shoppers can pick up key pieces like a blue silk shirt (left) from brands like Jigsaw (right, a £125 style) 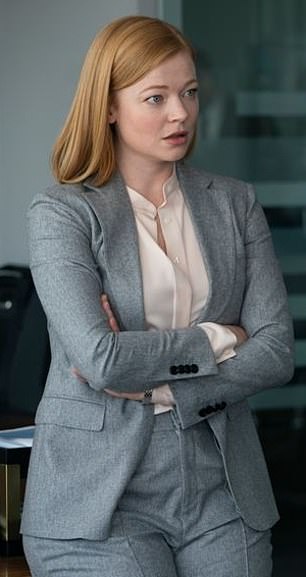 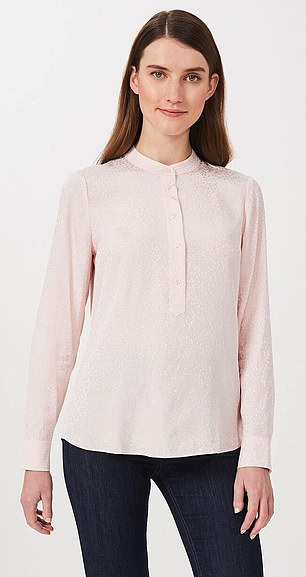 Soft shades: This pale pink colour is a perfect base for Shiv’s series two suit (left). A similar style, with the same type of collar, can be found at Hobbs for £39