The government was on Wednesday night preparing for the possibility of an unwanted byelection, with former minister Marlene Kairouz considering resigning from state parliament.

Kairouz, who has represented the western suburbs seat of Kororoit for 14 years, was last year charged by the Labor Party with breaching its rules over branch stacking allegations. She denies being involved in branch stacking, but the party has picked a new candidate for Kororoit and Kairouz’s time as an MP will end by November’s state election. 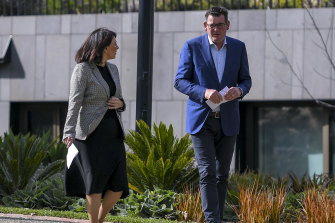 For months, the premier’s office and colleagues have tried to stop Kairouz from quitting before 11.59pm on Wednesday. If she leaves politics before then, a standalone byelection is automatically triggered. After this date, the speaker of parliament’s lower house can allow the seat to be decided at the state election.

A Labor source who requested anonymity said Kairouz was preparing to send her resignation letter late on Wednesday. But the situation was fluid and her mind was not made up, they said.

A separate Labor source said Kairouz felt scorned by the party’s processes and did not feel obliged to spare Premier Daniel Andrews a byelection. Her resignation would create a new irritation for Labor a week after it lost four of its most experienced ministers.

A byelection in Kororoit would be a test of the government’s popularity after years of pandemic-induced stress spawning economic insecurity, health system strain and polarised views about Andrews’ forceful leadership style.

Federal Labor suffered 15 per cent swings in some booths in the federal seat overlapping Kororoit (Gorton) and the major parties’ internal research shows a lower level of support for the government in some outer-suburban areas. State Labor retains an election-winning lead, according to the most recent Resolve Political Monitor poll. Labor holds Kororoit by a 25 per cent margin.

Kairouz’s decision comes amid negotiations between her lawyers and Labor’s legal team over hundreds of thousands of dollars in legal fees. Kairouz unsuccessfully tried to prove the Labor Party acted outside its rules when it charged her.

The Supreme Court rejected her bid and ordered she pay the party’s legal costs, which sources said were more than $200,000. Kairouz, who did not respond to repeated inquiries from The Age, has requested to pay a lower amount and the parties are in negotiations, which is common in disputes about legal costs. Andrews’ office, which is keen to avoid a byelection, has been aware of these discussions, which were active as late as Wednesday.

Kairouz – who was forced to quit the ministry after The Age reported an alleged branch stacking operation overseen by her ally Adem Somyurek – recently sold a house and has a new job lined up.

Nineteen Labor MPs, a quarter of all its MPs, have either quit or been dumped from parliament during this term of government. Twelve ministers have left the cabinet since the 2018 election.

Kairouz would be entitled to a higher departure payment if she served until the state election. MPs are entitled to almost $95,000 if they have served two terms, as Kairouz has, and quit at the election. The payment is tied to how much of the final term is served, so it would decrease the earlier she resigned.

While the Victorian Electoral Commission does not publish the cost of individual state byelections, the last federal byelection in Victoria, in the seat of Batman, cost $2,177,482.

The Liberal Party does not yet have a candidate for Kororoit, but Opposition Leader Matthew Guy believes his party’s best chances of winning seats from Labor will be in traditional Labor strongholds in the outer suburbs.

A government spokeswoman declined to comment on Kairouz’s departure and negotiations with the party over legal costs.