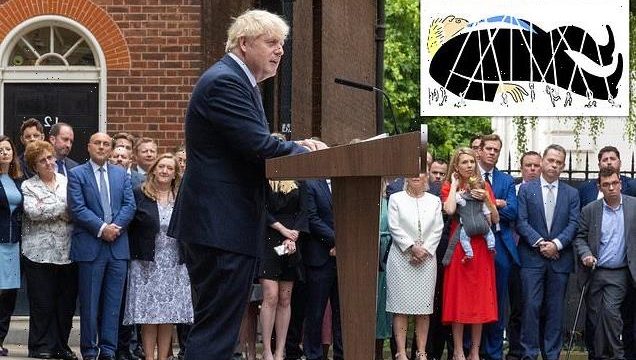 RICHARD LITTLEJOHN: Gulliver has fallen… Boris Johnson has been downed by a devil’s bargain between a pro-EU Blob and Lilliputian nobodies

Did any of those treacherous Tory non-entities who helped bring down Boris Johnson experience even the teensiest tinge of regret as they watched his valedictory address on the steps of Downing Street yesterday?

It was a typically bravura performance which served to remind us of his unique ability to appeal across the political and class divide, a gift which enabled him to deliver an astonishing 80-seat majority just two and a half years ago.

Never mind ‘Bye, Bye, Boris’, being blasted out by the pygmies dancing on his grave. The song which came to my mind was Joni Mitchell’s Big Yellow Taxi: ‘You don’t know what you’ve got ’till it’s gone.’

They say nothing speaks more about the mark of a man than the manner of his departure. Not for Boris the demeaning self-pity of Gordon Brown and Theresa May when they were led off to the gallows. Nor the louche insouciance of Call Me Dave when he was forced to call it a day.

Johnson appeared to accept his fate with reasonably good grace, humour and a dash of self-deprecation. He even wrote the headline for his own political obituary: 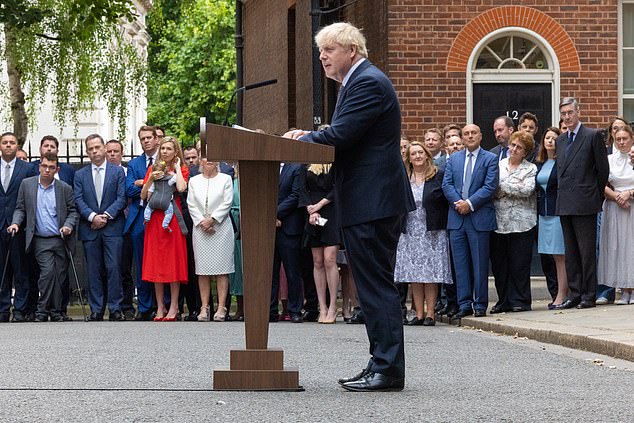 It was a characteristic Fleet Street flourish, of the kind which helped propel the Greased Piglet up the political greasy pole. Not that Boris has ever been a journalist in the traditional sense. He’s always been a showman, a political animal. Journalism was never an end in itself, it was a stepping stone to greater things.

Maybe that’s why so many of his detractors in what we used to call the Street of Shame resent him so much. He’s got away with scrapes and scandals which would have ended the careers of lesser mortals.

The most venomous attacks on Boris have come from those who once worked closely with him, but have never risen to the heights he’s achieved.

I’m not one of them, although I did write for The Spectator when he was editor and he turned up on a few of my long-forgotten TV shows in the dim and distant. To be honest, I’ve always considered him a bit of a circus act, albeit one who was destined to become the ringmaster one day.

Politics is a performance art and until fairly recently Boris pulled it off to perfection. Never mind sincerity, if you can fake self-deprecation . . . beneath the Charlie Chuckles act there was ruthless calculation. What brought it home to me was the revelation that before he decided which way to jump over Brexit, he drafted two columns — one pro, one anti.

(I have enough trouble writing one column at a time, but at least I’ve a pretty good idea what I think from the outset.)

Having worked out which would best suit his political ambition, he plumped for Leave. And thank goodness he did. When Boris came on board, I began to believe for the first time that we might actually stand a chance of winning.

So what if his decision was self-serving? Who cared if he was a bit of a clown? As Randy Newman (these days best known for the Toy Story score) wrote in relation to another controversial politician, Lester Maddox, governor of the U.S. state of Georgia between 1967 and 1971:

I’m not calling Boris a fool. Far from it. But he was a useful tool, manna from heaven for those of us who had been anti-EU since God was a boy. What mattered was the result, not his motivation. And having tossed the coin and decided on Leave, he threw himself into the campaign with gusto. No one else could have pulled off such a stunning victory.

That was the moment, in 2016, after Cameron flounced out of office in a fit of pique, when Boris should have reaped his reward and been handed the keys to No 10. Just think, if he had become Prime Minister back then, Brexit would have been done years ago.

There would have been no disastrous Mother Theresa government, no three-and-half years of turmoil, no attempted Chequers sell-out, no Gina Miller, no Northern Ireland Protocol, no gurning gargoyle Speaker Bercow almost succeeding in overturning the will of the people.

If the Remainers had continued to resist, Boris would simply have called a snap Get Brexit Done election and emerged with the kind of majority he achieved in 2019.

By now, it would be all over and we’d be reaping the benefits of slipping the stranglehold of the sclerotic Brussels bureaucracy. That it didn’t happen in 2016 is largely down to Michael Gove, who knifed Boris after working hand-in-glove alongside him during the referendum.

Gove’s Brutus impersonation cut him off at the knees. Gove claimed he was driven by principle and duty, not by personal ambition, an excuse which collapsed in a heap of hypocrisy when he himself stood for the leadership.

Then again, I’ve never met a politician who wasn’t motivated by personal ambition. Most of them enter the Westminster pit of vipers believing they can one day become PM. Even those who have the humility to admit they haven’t got what it takes to occupy No 10 are primarily fixated upon their own career advancement.

The regicidal antics of Boris’s so-called Tory colleagues, from certain duplicitous Cabinet members to wet-behind-the-ears backbenchers, have been despicable

They all lie and dissemble to further their own agendas. Take ‘holier than thou’ Max Headroom-lookalike, Labour leader Keir Starmer, a man with all the charisma of a cardboard cut-out.

A former DPP, who poses as a pillar of integrity and probity, Starmer has consistently berated Boris for prosecco parties during lockdown while concealing his own participation in a beer-and-biryani bash in Durham.

Labour’s constant catcalls for the PM to go have been as predictable as they are tedious. But that’s the job of the official Opposition.

Whoever said that in Parliament, your opponents are across the aisle, your real enemies are behind you, was bang on the money, as never before. The regicidal antics of Boris’s so-called Tory colleagues, from certain duplicitous Cabinet members to wet-behind-the-ears backbenchers, have been despicable.

Let’s agree Boris got some big calls right, from Getting Brexit Done (almost) to the spectacularly successful vaccine rollout. But that aside, his time in No 10 has been a bitter disappointment.

Since his brush with death during Covid, he seems to have forgotten that he once posed as a tax-cutting, libertarian, small state Conservative. Or was that simply an act, too?

His passionate embrace of the economically suicidal net zero madness, his drunken-sailor spending sprees, his failure to confront the divisive woke BLM and trans agendas are all an affront to the big-C and small-c conservatives who voted him into office.

Elected as an anti-Establishment, anti-Blob crusader, he has caved in at every juncture to the vested interests in Whitehall and quangoland. In his farewell speech, he thanked the civil service for their support and hard work. Eh?

The massed ranks of fanatically pro-EU Sir Humphreys treat him with undisguised contempt, openly resisting everything from Brexit to the Rwanda migrant policy. The civil service unions stubbornly defy all instructions to their members to abandon WFH and return to their desks.

In the face of such intransigence, Boris has simply shrugged. He’s been preoccupied with firefighting problems of his own making, from Partygate to personal profligacy with other people’s money.

Look, we know he’s always been economical with the actualité, like that other legendary Tory swordsman, the late Alan Clark.

And yet, we knew all that two-and-a-half years ago, when we elected him with an 80-seat majority. So did the Conservative Party, which was happy to go along with it. Apparently, though, we are now asked to believe that his porkies are beyond the pale. In all conscience, 50 members of the Government suddenly discovered they were unable to serve under such a dishonest leader.

None of those obscure junior ministers who resigned was motived by principle. Most of them acted in the spirit in self-preservation. Like those lily-livered Red Wall MPs, who owe their seats to Boris, they were worried they’d be out on their ears come the next election.

So having ridden the Brexit tidal wave to Westminster, they have been willing to align themselves with hardline Remainiacs in a palace revolution.

Boris has been brought down by a devil’s bargain between the Remainstream broadcast media; the pro-Brussels Blob; embittered rivals and has-beens passed over for promotion; ambitious and duplicitous alleged colleagues; and Lilliputian nobodies on the backbenches.

As to what comes next, the Tories should be careful what they wish for. If they couldn’t trust Boris, why should they back any of the thrusters lining up to take his place? Dishi Rishi is a busted flush and all you need to know about his co-conspirator Javid is that he was said to call himself ‘The Saj’, in a vain attempt to appear more interesting.

What was Nadhim Zahawi doing accepting the Chancellorship, only to do the dirty five minutes later? Maybe he took the job so he could get close enough to stab Boris in the chest.

Liz Truss did her version of John Major’s vanishing act when Mrs Thatcher was being assassinated. Major claimed to have had a prior dental appointment, though we’ve never been able to trace the alleged dentist. Liz boarded the first plane to Indonesia, to put as much distance as possible between herself and the scene of the crime.

Gorgeous, pouting Penny Mordaunt has the requisite ‘Ding, Dong!’ factor, but apart from looking good in a swimsuit has precious little else to offer in the way of experience. Captain Ben Wallace is a safe pair of hands, but so was Iain Duncan Smith, another military veteran. And look how that turned out.

As for Tom Who, and Er, Thingy, no thanks.

The only reason we’re told voters wanted Boris to resign was because the political class and the Boys In The Bubble have been trashing him in public for the past year. Throw enough mud and eventually it sticks.

Admittedly, Boris is his own worst enemy, But when the history books are written, future generations will be amazed to learn a PM with an 80-seat majority could be deposed because of fluff and nonsense over wallpaper and prosecco and that an unknown member of his Government was caught drunkenly groping the backsides of a couple of men in the Carlton Club.

Tory MPs have acted in haste, and may live to repent at their leisure. To paraphrase Richard Nixon, they haven’t got Boris to kick around any more.

As they survey the runners and riders to succeed him, they may well pause to ask themselves: What the hell have we just done?