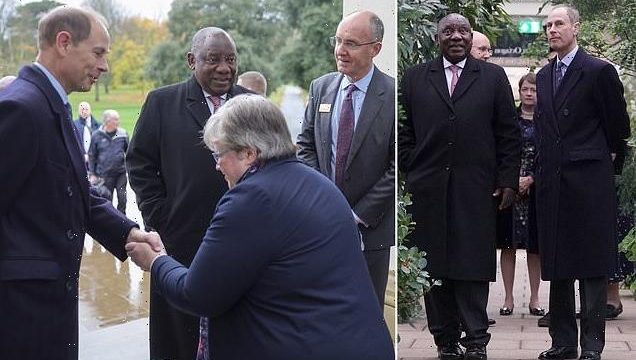 The President of South Africa had an early start this morning following a State Banquet in his honour last night as he joined the Earl of Wessex at Kew Gardens.

Cyril Ramaphosa, who is visiting the UK on a state visit this week, met Prince Edward at the Royal Botanical Gardens in south west London where he was shown around the stunning greenhouses.

Mr Ramaphosa was pictured with the royal as the pair strolled among the exotic plants in Kew Gardens before they met with environment secretary Thérèse Coffey.

President Cyril Ramaphosa and the Earl of Wessex pictured looking at exotic plants in the greenhouses of Kew Gardens this morning, on Mr Ramaphosa’s state visit to the UK from South Africa 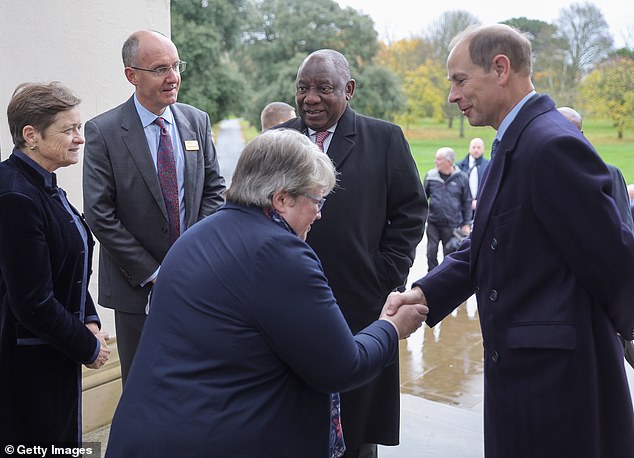 The environment secretary, who has held the office since October 2022 following a brief spell as health secretary in Liz Truss’s cabinet, was pictured shaking hands with Prince Edward as they greeted each other at the botanical gardens.

She then joined President Ramaphosa to walk through the greenhouses, where he was shown South African plants which have been carefully nurtured in special conditions where they are able to thrive despite not being in their native environment.

Prince Edward was due to show Mr Ramaphosa the South African national flower, the King Protea, which is being grown at Kew.

Ahead of last night’s state banquet, the Royal Family’s official Instagram account posted a video of Buckingham Palace chefs designing the King Protea from sugar and decorating it with edible paint as a tribute to the guest of honour. 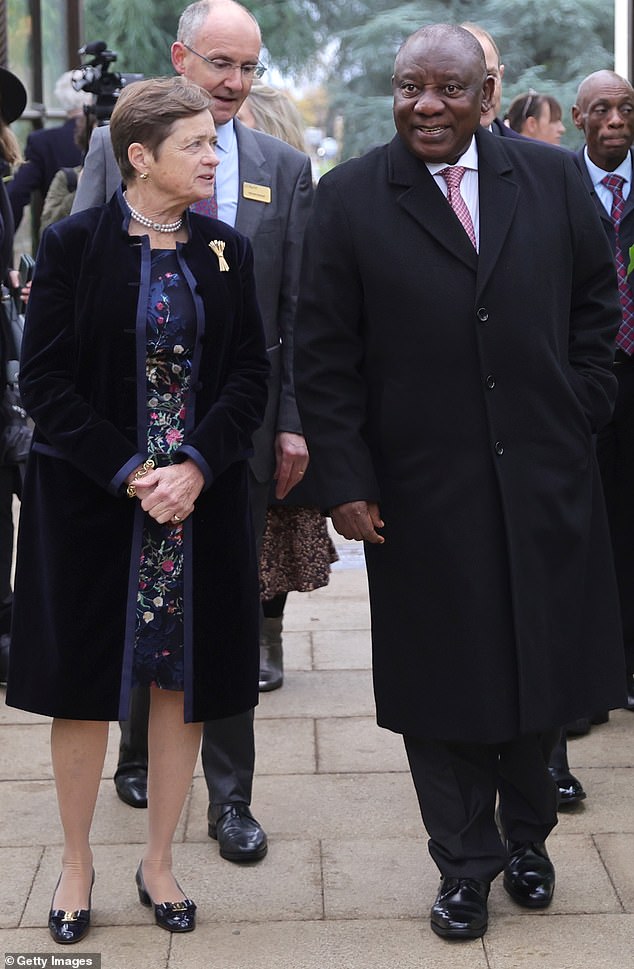 Mr Ramaphosa strolled through Kew Gardens this morning, where he was shown plants native to South Africa 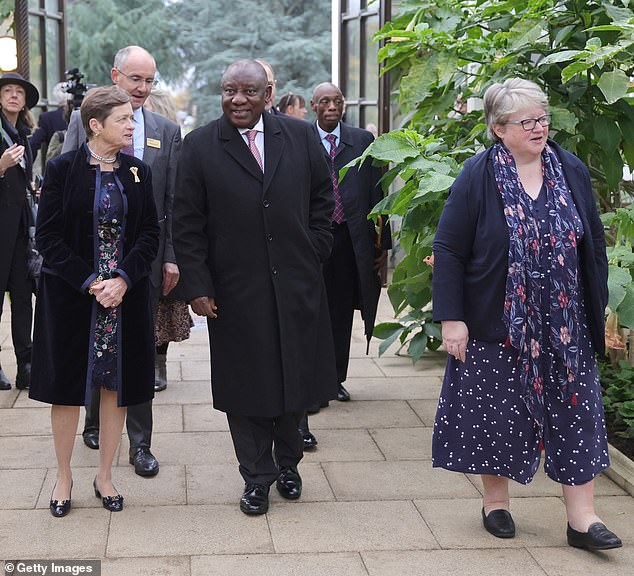 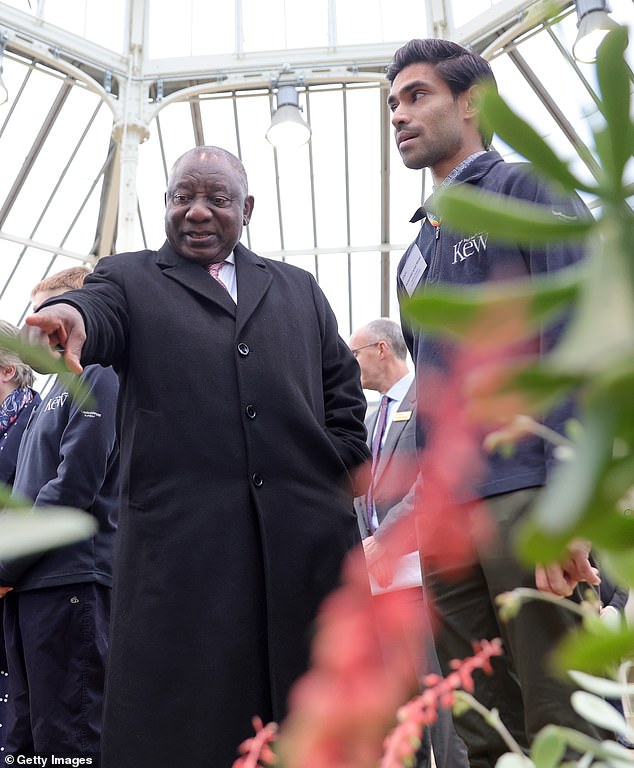 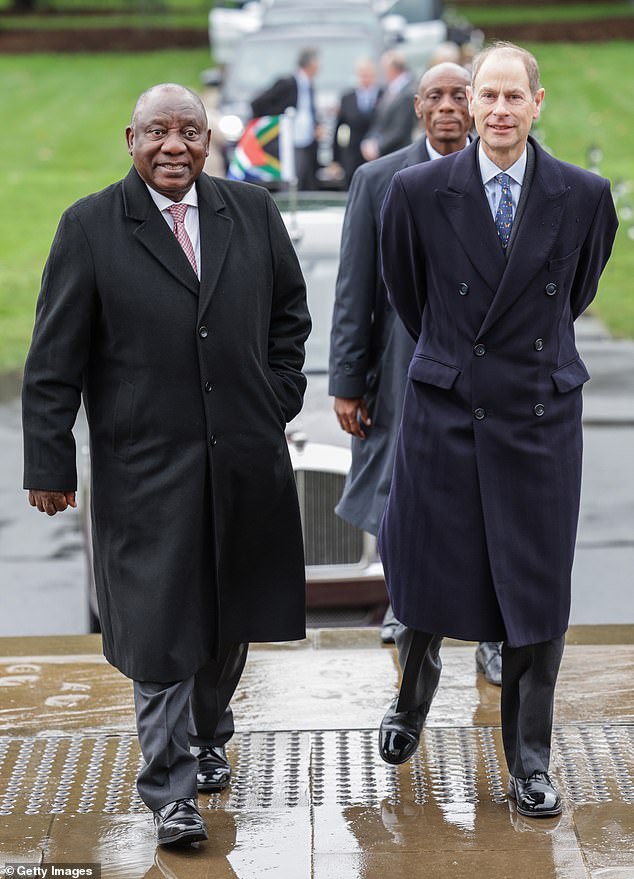 The South African president looked statesmanlike as he appeared next to Prince Edward, who led the tour of the gardens 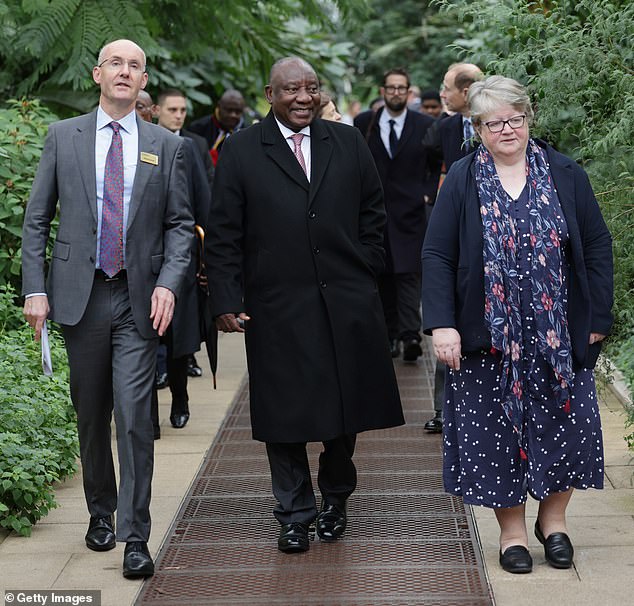 Mr Ramaphosa (centre) was joined by Therese Coffey (right) and the Director of the Royal Botanical Gardens, Richard Deverell (left)

The sugar flower was served with coffee and petits fours at the end of the meal.

While at Kew Gardens this morning, Mr Ramaphosa and the Earl of Wessex will celebrate the next phase of the Millennium Seed Bank Partnership with the South African National Biodiversity Institute, which will include a ceremonial presentation of seeds.

After the visit to Kew is complete, the South African president will accompany Prince Edward to the Francis Crick Institute in central London.

The Institute is a biomedical research centre that carries out research to understand the biology behind health and disease – and it collaborates with the University of KwaZulu-Natal in Durban, South Africa.

While visiting the centre, the president and Prince Edward will learn about technology used across Africa to diagnose infections, and will also meet South African scientists and students.

Later today Mr Ramaphosa will travel to 10 Downing Street to meet Prime Minister Rishi Sunak, before attending a South Africa Business Forum at Lancaster House, where he will be accompanied by trade secretary Kemi Badenoch.

Mr Ramaphosa is expected to return to Buckingham Palace at the end of the day to formally bid farewell to King Charles, following last night’s State Banquet in his honour.