The Australian Human Rights Commission has accepted a discrimination complaint against the National Disability Insurance Agency, challenging the age limit that restricts funding for service to those aged under 65.

Peter Freckleton, 74, lost the use of his legs after suffering polio as a child, but has been unable to access disability support services under the NDIS because legislation governing the scheme makes anyone aged 65 and over ineligible. 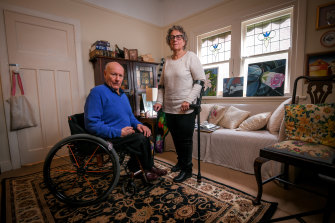 “This is a clear breach of the United Nations Convention on the Rights of Persons with Disabilities,” Dr Freckleton told The Sydney Morning Herald and The Age.

It comes as the Morrison government attempts to reform the NDIS to reign in spending, after its controversial trial of independent assessments caused many disabled Australians to have their support packages slashed.

NDIS Minister Linda Reynolds has warned that the NDIS faces serious sustainability issues, with expenditure forecast to grow to $40.7 billion in 2024-25, $8.8 billion above estimates.

Dr Freckleton is seeking for his NDIS eligibility to be assessed solely by reference to his disability, without regard to his age, for the NDIS Act to be amended so that all polio survivors are eligible, and for age restrictions to be removed for all Australians accessing the NDIS.

The Public Interest Advocacy Centre has agreed to represent him at the UN if his matter is not resolved through the AHRC, which conciliates complaints and can make recommendations but does not make binding decisions.

Dr Freckleton’s argument relies on the UN convention because the NDIA is exempt from the Age Discrimination Act.

Dr Freckleton said removing the age limit for NDIS services would not result in cost blowouts, as only a minority of elderly Australians would meet the eligibility requirements.

“It has to be a permanent and significant disability,” he said.

The Disability Doesn’t Discriminate campaign, which has collected signatures of more than 20,000 Australians, has the support of a number of crossbench MPs and senators, including Greens health and disability spokesman Jordon Steele-John.

“It is clear in speaking to the community that the aged care system is not providing enough supports for many disabled people,” Senator Steele-John said.

A spokesperson for Minister Reynolds said the design of the NDIS was based on the Productivity Commission’s recommendation that access be restricted to participants aged younger than 65, noting this was a bipartisan policy.

“The NDIS was designed to avoid replacing services already provided through the health or aged care systems,” the spokesperson said.