A powerful group of former political staffers and experienced political campaigners including Brittany Higgins, Therese Rein and Lucy Turnbull are demanding a Parliamentary Women’s Fellowship be set up as a safe place to hear grievances and act as a professional body for women in politics.

Their call came as current federal political and parliamentary staff met with ACTU president Michele O’Neil and public service union national secretary Melissa Donnelly to call for a safe workplace with an independent and confidential complaints process that leads to real consequences. 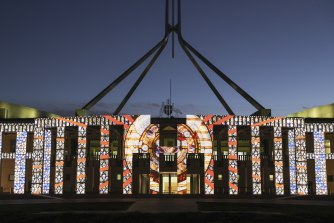 A week after the cross-party group of mostly former staffers first wrote an open letter to Prime Minister Scott Morrison and Opposition Leader Anthony Albanese requesting submissions made to the Jenkins Review to be kept confidential, the group is now requesting a formal avenue to contribute.

The letter, which is still in a draft format, has been written by Ms Higgins, Ms Rein and Ms Turnbull along with Jessica Rudd, and senior political staffers including Malcolm Turnbull’s former chief of staff Sally Cray and Mr Albanese’s former communications director Fiona Sugden.

“The authors of this letter are a non-partisan group of women seeking to reform the toxic culture that underpins the abuse, harassment, degradation and even assault of women in Parliament House, the workplace that should meet or exceed best practice for safety at work,” they write.

“We have been approached by women from all parties and are working to formalise a group of current and former staffers from across the political spectrum.”

Their ambition is not to prevent former staff from speaking directly with Sex Discrimination Commissioner Kate Jenkins, but to help find common ground in the contributions to the review so that the recommendations are fit for purpose and make a genuine and lasting impact.

The women have also proposed a raft of initiatives to make federal parliament safer and more sustainable for women, including a women’s parliamentary fellowship to function as a sounding board and a support group for female parliamentarians and staffers. They described it as a “non-partisan, inclusive, peak professional body” akin to the parliamentary Christian fellowship. Other suggestions include changes to the Members of Parliament (Staff) legislation and better training for all parliamentary pass holders.

CPSU members working in Parliament House – including political advisers and parliamentary services staff – have also called for changes to the rules governing their employment and workplaces, in a separate statement.

“The work we do for our democracy is incredibly important, but our workplaces have significant power imbalances, which at times allows bullying, sexual harassment, and sexual assault to fester and go unpunished,” they said.

After meeting with Ms O’Neil and Ms Donnelly, they put out five demands for action, including the establishment of an independent and confidential complaints process and mandatory training for parliamentarians and staff.