It is not surprising that the passing of Olivia Newton-John has prompted an outpouring of tributes from around the world. During a stellar career, her high, supple singing voice, her girl-next-door looks and the warmth of her personality captivated audiences wherever she went.

But she was not always destined for stardom. Born in Cambridge, Britain, she arrived aged six in Melbourne with her two siblings. Her Welsh father, Brinley Newton-John, was a former MI5 officer who worked on the Enigma project cracking German codes. Her mother, Irene Helene Born, was the daughter of Nobel prizewinning Max Born, a Jewish German physicist and mathematician. 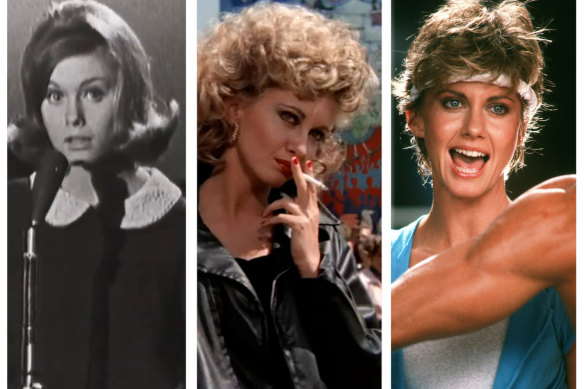 The many versions of Olivia Newton-John.

Her father excelled at music and theatre and initially intended to become an opera singer before turning to academia. But young Olivia grew up wanting to be a vet or mounted policewoman. By 14 though, she started performing serenades with three friends. “They were sweet girls who lived to sing (like me), so we started a singing group that we called the Sol 4,” she remembered in her recent memoir Don’t Stop Believin’. “Our wardrobe consisted of denim jeans, hessian jackets and black turtlenecks.”

Those performances led to her gaining some recognition when she started appearing on local TV shows such as Time for Terry and The Happy Show. Early clips of her on these shows, which can be viewed on YouTube, show a young girl with a sweet voice and smile that the camera loved.

But like many Australians who excelled in the arts during the ’60s, further recognition was found overseas. In 1966, Newton-John won a TV talent show in Sydney. The prize was a boat trip to Britain, which she took with her mother.

She was no overnight success. In London, aged 18, she recorded her first single, ’Til You Say You’ll Be Mine. It garnered, at best, modest attention. Not put off, she toured Europe with expatriate Australian singer Pat Carroll, which became a stepping stone to securing some support slots (including for the Seekers) and TV appearances.

All the hard work eventually paid off when she released the album Let Me Be There, in 1973, which led to a Grammy win for best female country vocal performance for the title track. The following year, she won a Grammy for record of the year with I Honestly Love You. In the same year, she was Britain’s entrant for the Eurovision Song Contest, coming fourth, with ABBA taking home the prize for Waterloo.

And then came Grease. Her role as 1950s good girl turned leather-clad seductress Sandy Olsson catapulted her career to its highest point. Grease was enormously successful and held the crown for the highest grossing musical film of all time until the release of Mamma Mia! in 2008, and You’re the One that I Want, her duet with co-star John Travolta, became one of the best-selling singles of all time.

For all her fame though, what she became best known for was her approachable and good-natured persona. She wore her celebrity status lightly. She used her success to champion her chosen causes, including animal welfare, the environment and a more holistic treatment of cancer.

With the recent passing of Judith Durham and Archie Roach, and now Newton-John, it has been a time to reflect on this group of remarkable performers whose talent and character have played such an enormous role in portraying to the world what it means to be Australian. They did it with grace, poise and humility. We thank them all and remember them for the remarkable people they were.

Gay Alcorn sends an exclusive newsletter to subscribers each week. Sign up to receive her Note from the Editor.