For the first few months after he became Labor leader following the party’s shock loss in the 2019 election, Anthony Albanese kept up his regular Friday morning appearances on Nine’s Today show.

Each week, as one of Albanese’s advisers describes it, he would turn up and have the stuffing kicked out of him by then-home affairs minister Peter Dutton while trying to smile nicely and look like an alternative prime minister.

It wasn’t worth the effort and by August, Albanese was out, handing the spot to deputy leader Richard Marles. 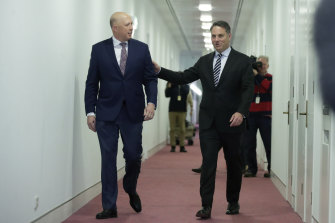 Whether Peter Dutton should keep waking up early on Fridays to joust with Labor’s Richard Marles on Nine’s Today show is the least of his problems.Credit:Alex Ellinghausen

Now Dutton, who is almost certain to be confirmed as Liberal leader on Monday when the battered and bruised party meets in Canberra, faces a similar conundrum. But whether he should keep waking up early on Fridays to joust with Marles on Today is the least of his problems.

After two decades in politics, perceptions of Dutton as a political warrior for the conservative Right, a hard-line border protection minister and, more lately, a China hawk have set like cement.

Ariadne Vromen, a professor of political sociology at the Australian National University, says Dutton will have to “heal a divided party and a divided Coalition, and create a new persona for himself” as leader of the party for the Australian public.

“He has to find the issues that unite people in the outer suburbs and the blue-ribbon seats they lost. It could be the cost of living, house prices, economic security, the future of work – they have to focus on that. They [the Coalition] also have to move on from the adversarial campaign and they have to realise climate change is not class-specific, it matters to most people.”

Can Dutton soften his image, shift personal perceptions, knit together a broken party and thread the policy needle between an ascendant Right faction and a depleted Left faction that has just been massacred at the ballot box?

Labor frontbencher Tanya Plibersek went for the jugular this week when she compared Dutton to Voldemort, the villain from the Harry Potter series.

Plibersek quickly apologised for commenting on his appearance and Dutton noted he had a medical condition that caused baldness, and he “wasn’t the prettiest bloke” as a result.

Albanese was genuine when he said this week he got along better with Dutton than former prime minister Scott Morrison. But Plibersek’s comments, though she overstepped, are an early taste of how Labor will seek to frame and marginalise Dutton as unfit for high office.

Ahead of Monday’s meeting to elect a new Liberal leadership team, the only two MPs to have nominated themselves are Dutton for leader and Sussan Ley for the deputy’s role. Dutton is the unbackable favourite as the most high-profile conservative in a party room now skewed heavily towards the conservative faction after so many moderates lost their seats to the teals and Labor.

If successful, Dutton faces a monumental task to reset the public’s collective perception of him and, at the same time, put his party back together and make it competitive against the Labor Party and mostly progressive crossbench that will hold as many as 92 seats – more than the 90 Tony Abbott won in the 2013 landslide.

Already, a makeover is under way, with colleagues attesting to the Dutton “they know” as a pragmatist, rather than a religious conservative; as someone who helped steer through the same-sex marriage postal survey; who isn’t hung up on the climate change wars; who can unite the party; who can focus on cost-of-living issues and speak plainly to the suburbs and regions.

In a statement announcing his candidacy on Wednesday, he highlighted the breadth of his portfolio experience, his view that he would lead the Liberal Party (rather than a moderate or conservative party) and his hope Australians would see another side of him now – with a supportive statement from his wife, Kirilly, and family photos to boot.

Abbott, the last Liberal to win government for the Coalition from opposition, told this masthead: “I have nothing but best wishes and admiration for Peter Dutton. I think he is the best person for the job and I think he will do it very well indeed.”

But the Coalition looks likely to secure at most 59 seats, which would be its lowest proportion of seats in parliament since it was founded in 1944.

Dutton would be the first Queenslander to lead the party and the first leader since 1995 not from Sydney.

Back in 2019, when Dutton attempted to topple former prime minister Malcolm Turnbull, he spoke about having a chance to smile more. But it’s going to take more than his pearly whites to shift perceptions.

The 2022 election has flipped the script and some of the verities of Australian politics – such as that electorates like Kooyong, Goldstein, Higgins, Boothby, Mackellar, Wentworth, North Sydney and Curtin are safe Liberal seats – have been wiped out. 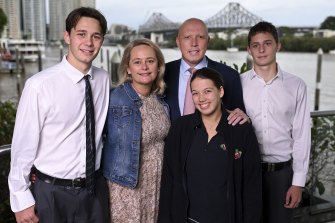 Peter Dutton, pictured with his family (Harry, wife Kirilly, Rebecca and Tom) is keen to project a softer image.Credit:Dan Peled

Morrison’s election strategy of, in effect, abandoning those seats while targeting outer-suburban and regional electorates, including Corangamite, McEwen, Parramatta, Werriwa, Greenway, Gilmore, Lingiari and Cowan, was an utter failure.

But according to Tony Barry, a Liberal-aligned consultant and pollster for Redbridge who worked for Turnbull in opposition, Dutton would start with internal authority because he is from the conservative Right faction, and he won’t get caught up in a Left versus Right internal culture war.

“In the Liberals, if the leader isn’t from the Right, they struggle, like [Brendan] Nelson, Turnbull and [John] Hewson, for example. He has that going for him, he is pragmatic. He will pivot to families and the suburbs and small business, which is actually the Liberal base and which we have been disconnected from,” Barry says.

One of the most difficult challenges over the months ahead will be deciding which parts of the government’s agenda to support and what to oppose.

The party’s approach to Labor’s climate policy will be instructive. In recent days, former finance minister Simon Birmingham has publicly called for a more proactive approach, while outspoken Nationals senator Matt Canavan has hardened his opposition to supporting net zero emissions by 2050.

The Liberals’ post-election review, launched on Thursday, will help guide the party on that issue.

If Dutton is the policy pragmatist he claims to be, he may look to take a page out of John Howard’s book as opposition leader in the early days of Bob Hawke’s government and wave through Labor’s slightly more ambitious policy.

The last Australian government and prime minister to serve just one term were Labor and James Scullin, who won power in 1929 and lost three years later as the Great Depression took hold.

Certainly, domestic and global economic conditions will be difficult for Albanese and Labor over the next three years. But the odds are against Dutton winning the prime ministership in 2025.