Britney Spears’ family ‘disturbed’ by her ex lurking outside their homes

More than two decades after Britney Spears burst onto the pop music scene in a midriff-baring Catholic school uniform, the superstar still has an affection for apparel that shows off her enviable abs.

But 2001-2002 marked a sensational period in Spears’ sartorial journey, as her shirts became notably shorter and the waistline on her jeans reached dangerously low depths. She tantalized the public with a sexier-than-ever image that delighted fans and put parents on edge.

The singer, then 19 going on 20, had revamped her aesthetic with the help of legendary styling duo Kurt Swanson and Bart Mueller, aka Kurt & Bart.

They frequently relied on designer Alina Campbell to create crop top options for Spears, who wore many of them for now-iconic moments in her career.

“I knew it was a big deal to work for Britney. As a designer, there was nothing more thrilling than being asked to make something for the world’s biggest pop star,” Campbell, 50, told Page Six Style in an exclusive interview, reflecting on her experience crafting a succession of styles for Spears as she promoted her self-titled third studio album. 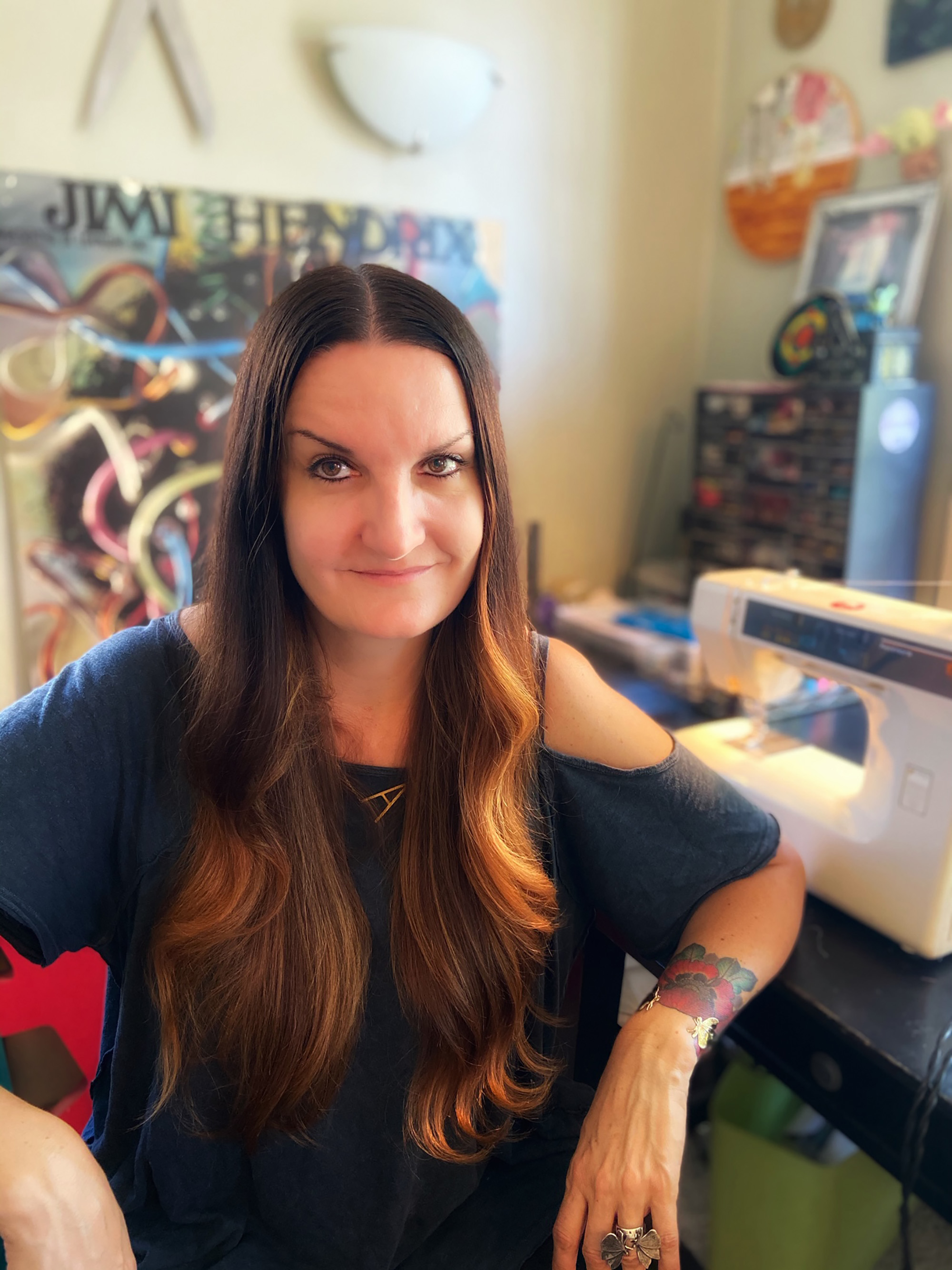 “But I didn’t realize then that I was contributing to pop culture history, helping Britney make moments that are still talked about 20 years later. These looks, the belly shirts in particular, defined an era — an era that Britney ruled.”

Campbell, favored by Kurt & Bart for her intricate leather work and feminine silhouettes, is behind the white top worn by Spears on the cover of “Britney.”

“That was the first thing I ever made for Britney. I met with Kurt and Bart, we went over a few sketches and landed on something they loved for the album cover shoot,” she recalled. “Then they gave me two days to make it, which was stressful — but I was obviously up for the challenge.” 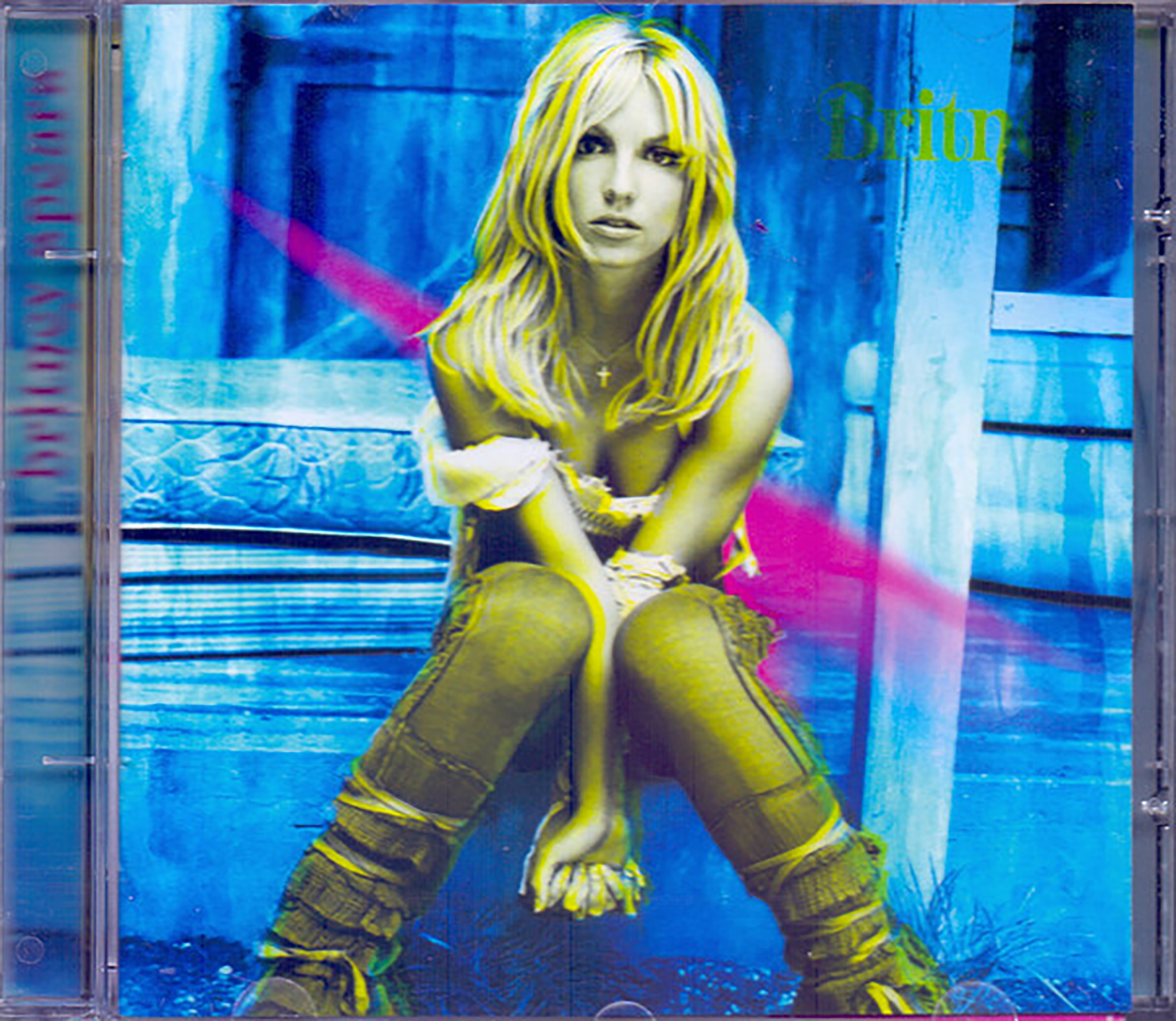 After working furiously from the floor of her Brooklyn apartment to meet the tight deadline, Campbell shipped the piece off to Los Angeles for the photo shoot. It wasn’t long before she received an exciting phone call.

“Kurt said, ‘I have good news and I have bad news. The good news is your shirt is on the cover of the Britney album,’” the FIT graduate recounted.

But the bad news? Spears’ forward-leaning pose meant that only the top’s straps and frayed lace neckline were visible in the shot.

“I was like, ‘Oh, well, I’ll take it!’” Campbell said, adding that she was relieved to see Spears wear the top again — and in full display — in a subsequent magazine spread. “So, it had its moment after all.”

Further consolation came in the form of future commissions from an impressed Spears. Campbell was tasked with producing custom garments for a series of live performances, plus three of the artist’s most evocative music videos: “I’m a Slave 4 U,” “Overprotected (Darkchild Remix)” and “I Love Rock ’N’ Roll.”

“I always held my breath hoping that Britney would like what I came up with. And luckily, it worked out quite a few times,” she said. 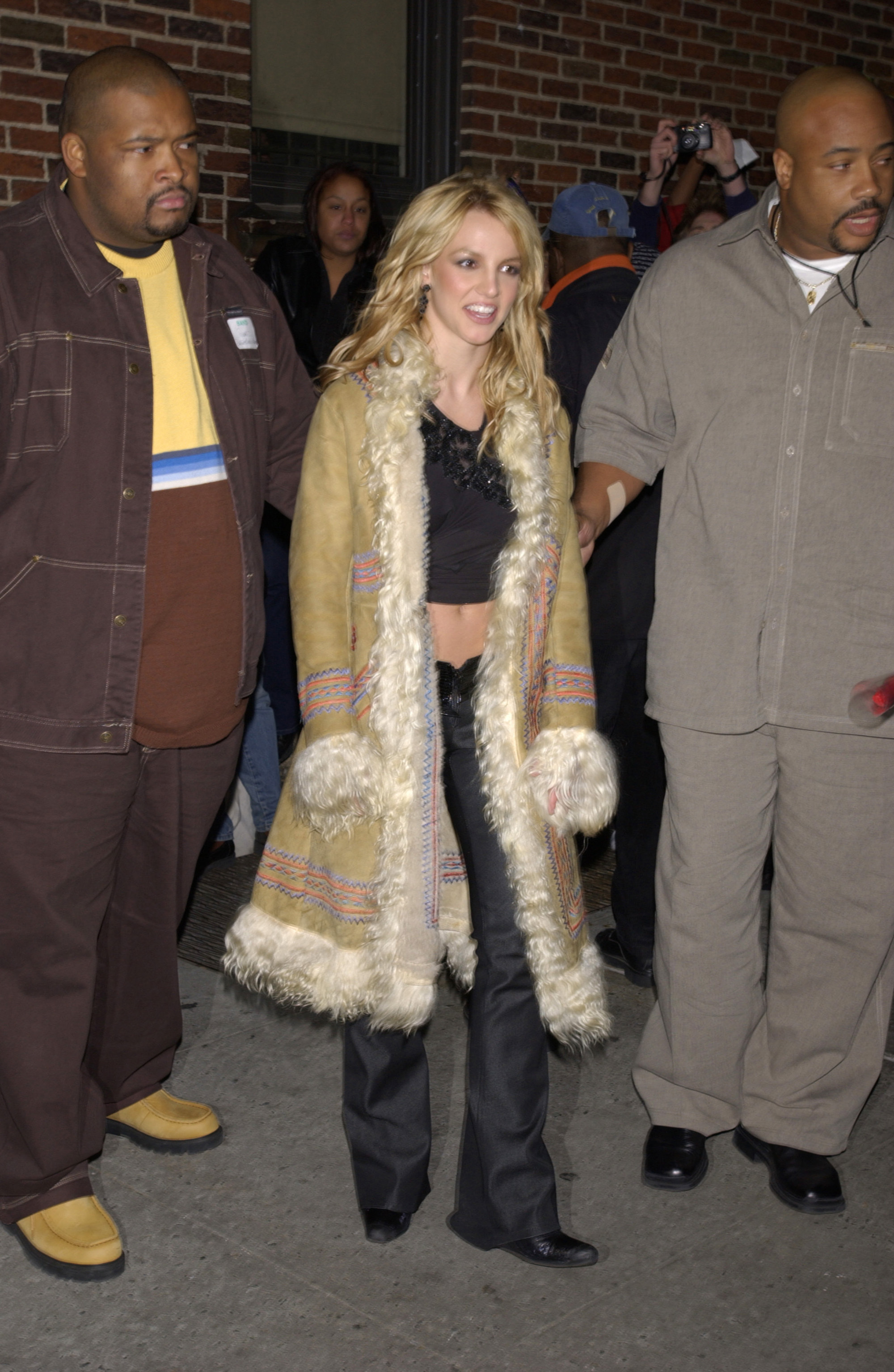 “I feel privileged to have been one of several designers who got to share in Britney’s vision of herself, this powerful young woman who owned her sexuality unapologetically.”

Campbell’s work for Spears ultimately dissolved as the entertainer distanced herself from Kurt & Bart, who last styled the star in 2004. Nonetheless, the impact of their collaborations reverberated throughout young Hollywood for years — and even still lingers today.

“The crop top and low-rise jeans look trickled down to everyone else, especially Britney’s industry peers. And now Gen Z is bringing it back,” Campbell acknowledged.

“Back then, though, everybody wanted to wear what Britney wore — and they wanted to look like Britney wearing it. That was always the tough part. No one could pull off the look quite like her.”

Campbell — who has also designed for the likes of Pink, Mary J. Blige, Anastacia and Evanescence’s Amy Lee — now serves as the costume archivist and senior registrar for California’s Lucas Museum of Narrative Art, where she cares for clothing used in the “Star Wars” films. 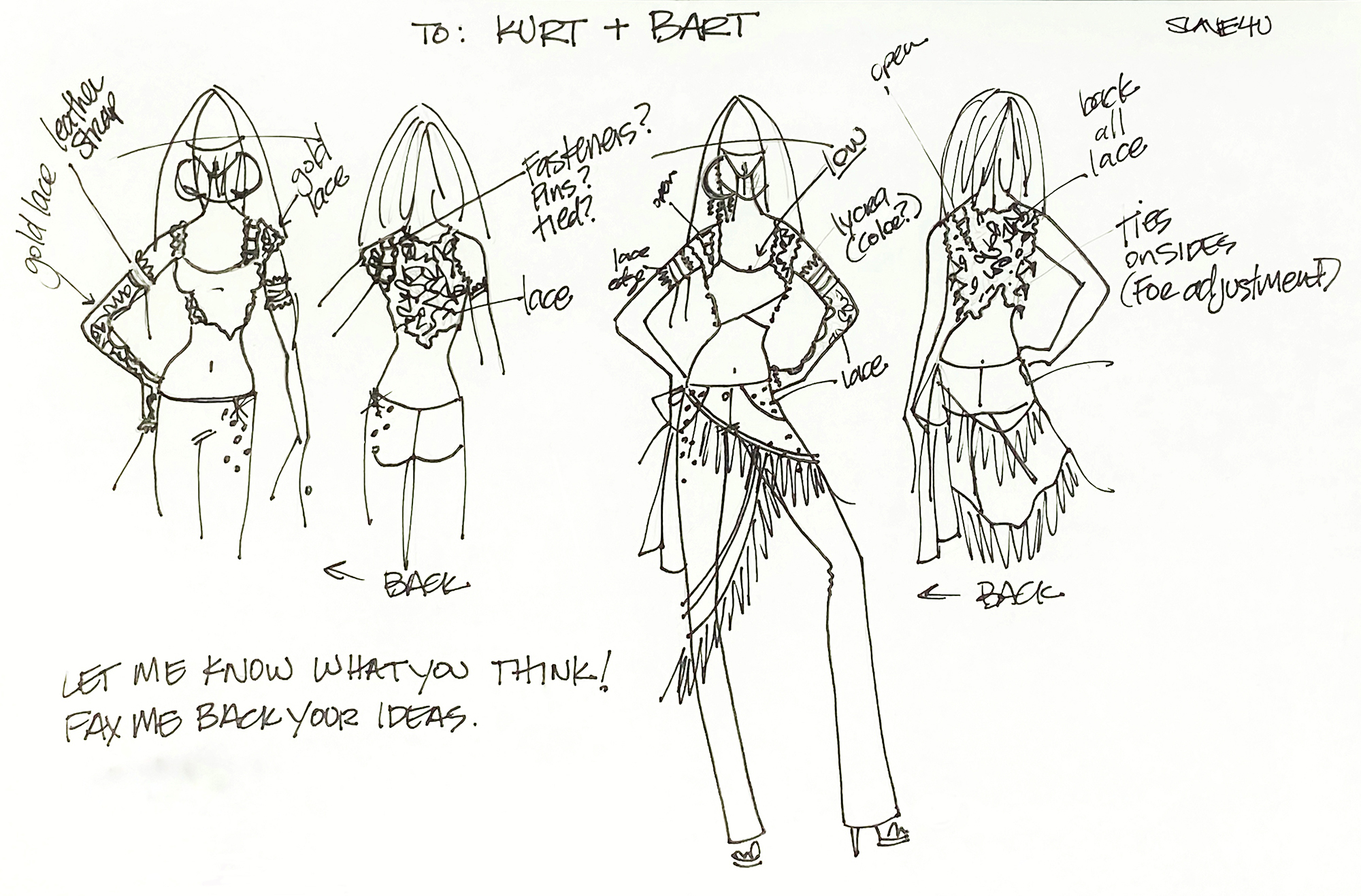 Though she is enjoying this current chapter of her career, Campbell dreams of one day reconnecting with Spears, now 40, who in November was released from a controversial conservatorship that had controlled her life since 2008.

“I was involved in Britney’s career when she was free and figuring out who she was as a woman. I’d love to get to know the strong, amazing woman she is today and make something really special for her,” said Campbell, who still has her original form tailored to Spears’ early-aughts measurements.

“Something cropped, of course, but modern, flowy, feminine and colorful,” she added. “Oh, and with a dramatic sleeve! Because if I know anything, it’s that Britney loves a dramatic sleeve.”

Below, Campbell shares the stories behind her greatest hits for Spears. 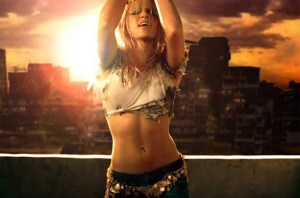 “I draped this on the form without any pattern. This gave Britney room to adjust the top to her liking. When I saw the video, I was in complete awe. I loved how the gold floral appliqués looked against her tan skin. And I loved how she chose to tie the top, so that a bit of her chest was exposed at the bottom. I didn’t go to the fitting, so it was a nice surprise to see how she made the top her own. So sexy. Classic Britney.”

“Of all the things I created for Britney, this is by far my favorite. I actually met Britney in person for this one. Kurt and Bart had me stop by her dance rehearsals for the video — which, by the way, was an incredible thing to see in person — and she tried the top on right after. It was lacy, sheer, had big slitted sleeves and was originally white.

“It was Kurt and Bart’s genius idea to dye it. They almost went with a candy apple color, but they chose this stunning turquoise instead, which looked great with the pink bra underneath. Even when it was white, though, I could tell Britney loved the top and was excited to wear it.

“I actually had to make two of them because Britney wore it for several scenes, including a ‘stunt’ version that got wet while she danced in the rain. I also got to be there for the video shoot and let me tell you, witnessing Britney perform right in front of your face for a second time, while wearing your work, is absolutely unreal. I couldn’t believe I got to witness her magic so intimately.” 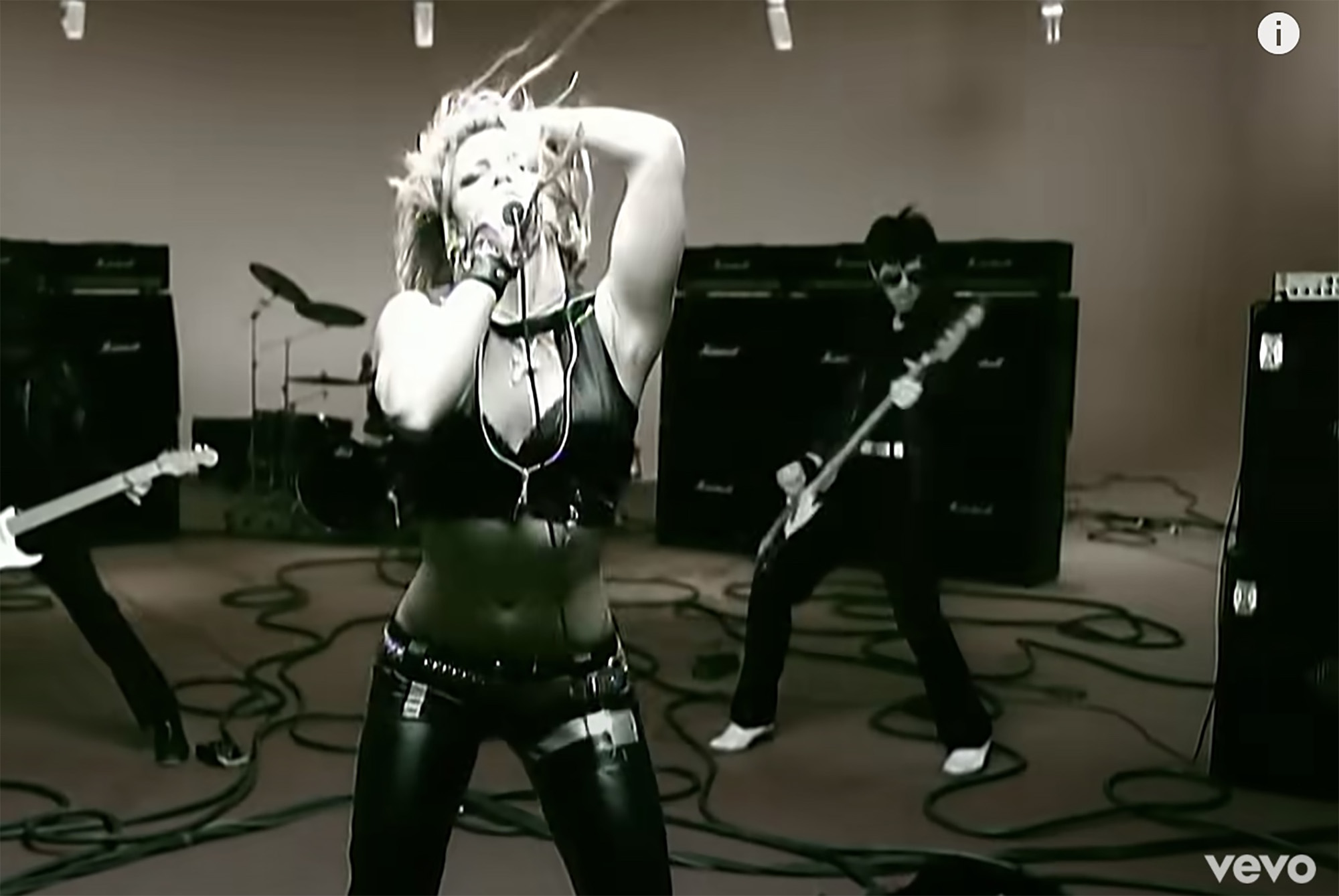 “This was a specific request from Kurt and Bart. They wanted a little cropped leather vest. Us independent designers were popular among the MTV set because we could deliver one-of-a-kind pieces. Back then, it was rare for a big fashion house like Gucci or Chanel to create something custom for a video or performance.

“Also, everything we made, we always thought about how Britney would move in it. She had to be able to dance. There always had to be some kind of stretchy element to it. We were doing very specific work that a lot of big designers wouldn’t have bothered with.”

“Kurt and Bart told me they needed a black top. I picked the fabric and I had some black metal mesh, too, that I wanted to incorporate. I draped it on my Britney form as well without much of a pattern, but I love how it turned out. And the green pants she wore with it? Quintessential Kurt and Bart. They have the coolest taste.

“I had no idea the performance was going to be in front of the Bellagio in Las Vegas in the middle of the fountains. Kurt and Bart were like, ‘Make sure you watch it.’ I turned my TV on to see it and I was completely blown away. She was a powerhouse.”

“I showed Kurt and Bart this beautiful leather I had, and told them, ‘I want to make a shirt out of this for Britney.’ And they were like, ‘Yes, please, go for it.’

“I originally created it for a Rolling Stone shoot. Because she wasn’t going to perform in it, I took a chance by making the neckline super low and a bit more risqué than I would do for the stage. But then Kurt called me and said, ‘Britney saw your shirt and she wanted to wear it for her TRL special on MTV. And oh, by the way, it’s on TV right now. Turn on your TV!’

“With the way she dances, I knew she could fall right out of it! My heart was in my throat the entire time. She looked amazing in it and killed the performance. But at the end, you see that the laces on one side of the shirt start coming undone.

“Luckily, there wasn’t a major wardrobe malfunction. After a commercial break, you see that she was re-laced back into it. I said to myself, ‘Oh no, this is exactly why I was freaked out.’ She almost lost the top!”

“I had these big, sheer sequined appliqués that I used on the front of the top. And then for the rest, I used a lightweight black fabric that just tied around her body. It was another piece that could be worn multiple ways but she chose to have most of her back exposed, which looked beautiful. She had — and still has — the best body. She was so easy to dress. Everything looked great on her.

“I never lost the excitement in seeing my work on TV, especially on a show like ‘Letterman.’ I watched all of these moments, always amazed that they were actually happening. I had to pinch myself, really. Designing for Britney was the ultimate dream.”