Areas of South America’s Andes Mountains range are seeing little to no snow cover at a time when snowfall should be at its highest.

Satellite images show that many mountains in the famed range, which runs along the continent’s western edge, have either sparse snow or totally bare ground, Reuters reported. 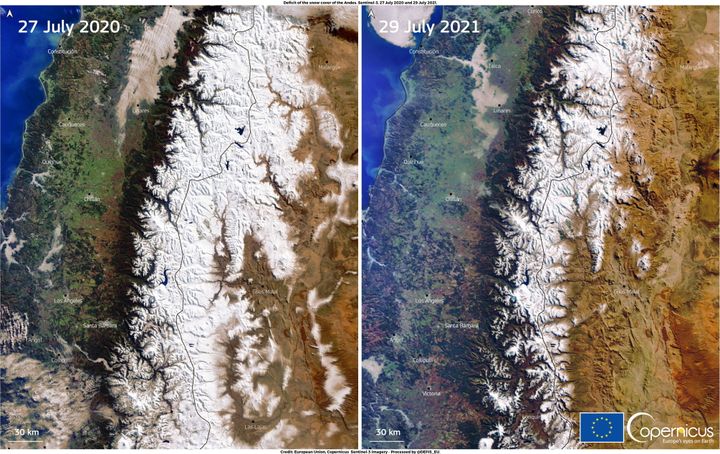 “Here we are seeing a process of long-term decrease in precipitation, a mega-drought,” Ricardo Villalba of the Argentine Institute of Snow, Glacier and Environment Science Studies told Reuters. “If you look at the precipitation levels right now for the entire Cordillera [Andes range], they ​​show that it has either not snowed at all or has snowed very little.”

Because it’s winter in the Southern Hemisphere, the mountain range should be seeing peak snowfall. Scientists attribute the decade-long drought to human-caused climate change.

A study published in June predicted that droughts and other extreme weather events will become even worse throughout South America if greenhouse gas emissions continue unchecked.

“South America and Brazil in particular are already showing signs of climate change, including a rise in surface temperatures, changing rainfall patterns, melting of glaciers in the Andes, and more frequent and intense extreme weather events,” Lincoln Muniz Alves, a researcher at Brazil’s National Space Research Institute, said in a news release. “These variations in the characteristics of the climate are forerunners of what will happen in the decades ahead if the unprecedented rise in greenhouse gas emissions continues.”

A historic drought is simultaneously slamming the western U.S., which is seeing a dwindling water supply and escalating threat of wildfires worsened by exceptionally hot and dry conditions.