Labor is capitalising on the latest dust-up between the ABC chair Ita Buttrose and the Morrison government to solicit donations for its federal election campaign, saying it plans to use the money on advertising to promote its ABC funding policies.

In a sign the funding wars over the public broadcaster will be a political football at the upcoming election, Labor has launched a “Save the ABC” campaign fund, using an email call-out to direct people to an ALP fundraising website. The Morrison government has remained tight-lipped about the broadcaster’s next three-year funding block, which must be set in the next federal budget. 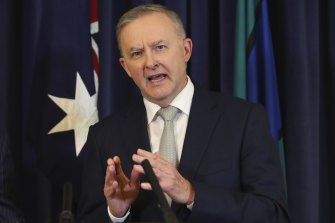 Opposition Leader Anthony Albanese has committed to abolishing the three-year funding terms for the ABC and SBS in favour of five-year blocks, as Labor seeks political donations to “save the ABC”.Credit:Alex Ellinghausen

But in an election pledge on Friday, Opposition Leader Anthony Albanese committed to ditching the triennium funding model for the ABC and SBS in favour of five year-terms, in a move aimed at increasing budget certainty by taking it beyond the electoral cycle.

Labor’s ABC email donations campaign, which states it is from communications spokeswoman Michelle Rowland but has been organised by the opposition’s national head office, asks: “Will you donate $20 to our ‘Save the ABC’ campaign fund and help fund our campaign to save the ABC at the next election?”

As part of the email pitch, Ms Rowland claims the government is “trying to silence the ABC” ahead of the election, and cites as an example the furore over a Senate inquiry into the ABC and SBS’s complaints processes. The inquiry, which was initiated earlier this month by Liberal Senator Andrew Bragg despite opposition from Labor and the Greens, infuriated Ms Buttrose, who said it was designed to subvert a separate external review she had commissioned into the same issue.

“Government senators have launched an inquiry into the ABC which ABC Chair Ita Buttrose has called ‘political interference designed to intimidate the ABC and mute its role as this country’s most trusted source of public interest journalism’,” Ms Rowland said in the email circulated to a party mailing list on Tuesday.

“This is just another example of how Scott Morrison and the Liberals will attack anybody who speaks truth to power in Australia.”

The ABC has consistently complained about its funding under the Coalition in recent years while the federal government has repeatedly rejected claims that it has cut the broadcaster’s budget. In June last year, the ABC announced cuts to programming and has since cut at least 229 jobs, blaming a three-year funding freeze that took effect in 2018 for stripping $83.7 million from its budget worth just over $1 billion a year.

ABC chairwoman Ita Buttrose has accused Senator Andrew Bragg of political interference of the broadcaster after he sought a Senate inquiry into the ABC’s complaints processes. Credit:Alex Ellinghausen/James Brickwood

Labor has committed to restoring the $83.7 million to the ABC if elected, but did not make a broader funding commitment as part of its policy announcement on Friday, saying only that it would “review options”.

“In addition to five-year funding terms, a Labor government will review options for delivering a greater level of financial stability and certainty to the national broadcasters to safeguard against arbitrary ideological cuts and political interference,” Mr Albanese and Ms Rowland said in a joint statement.

Labor’s donations campaign prompted a counter-claim by Communications Minister Paul Fletcher that it was undermining the ABC’s independence.

“The ABC needs to be completely free of any bias or political alignment,” Mr Fletcher said. “This curious action by the shadow communications minister should be of concern to any Australian who cares about the ABC’s objectivity and political independence.”

An ABC spokesman said the broadcaster had no involvement in Labor’s campaign and had no further comment.

Ms Rowland’s office referred questions about the donations campaign to the ALP’s national secretariat. An ALP spokesman said the donations would only be used on communicating the party’s ABC-related policies, rather than bolstering its general election war chest. But he declined to say how much money the party anticipated it would raise through the donations drive, or how many people were reached through the email call-out.

“Right across Australia, Labor will be campaigning against Mr Morrison’s cuts to the ABC,” the spokesman said.

“All donations raised from ABC-related emails will be spent on advertising highlighting the difference between the ALP and Coalition on ABC funding – because only a federal Labor government will properly fund the ABC.”

Our Breaking News Alert will notify you of significant breaking news when it happens. Get it here.