Wherever She Wanders takes the dark, vexed issue of sexual assault in universities, holds it to the light and illuminates it from many angles. Playwright Kendall Feaver avoids imposing her own perspective, instead astutely choosing characters who become the many facets of her prism – or perhaps it is more of a mirror-ball, reflecting these people back on themselves, their growth in self-knowledge being modest. Even so, Feaver seems to be saying, it is by such tiny increments that we move forward.

She shrouds an alleged rape in just enough consensual fog to blend black and white into the greyness beloved by those with something to hide. Meanwhile, she plaits gender politics with intergenerational perspectives on feminism, and adds knots of authority and race. This could have overburdened the play with thematic concerns at the expense of story and character, but Feaver has dodged that trap.

She does, however, take too long to set up her story, as we are 30 minutes into the two-and-a-half-hour play (including interval) before the plot really thickens. 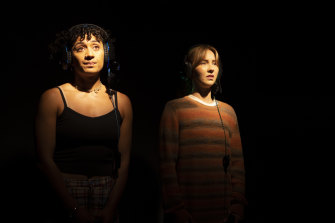 Nikki (Emily Havea) is a third-year undergraduate brimming with ideological self-righteousness, especially as relates to the patriarchy. She befriends Paige (Julia Robertson) who, on her first night in their staid, wood-panelled residential college, takes a boy – Aaron, whom, in a masterstroke on Weaver’s part, we never meet – to her bed, where she passes out and he proceeds.

Nikki tells her this constitutes rape and informs the college’s first-ever female master, Jo (Fiona Press). Initially, Jo will only act if Paige is prepared to come forward, cueing intergenerational feminist fireworks, intensified by both Jo and Nikki also having been campus assault victims. The drama’s essence lies in the attitudinal dynamics between these two, with Jo allowing some leeway for male stupidity, and Nikki hell-bent on retribution, even when her only evidence is suspicion.

After the lumpy start, the play gallops along, gathering complexity at every furlong, so you find yourself in furious agreement with first one character and then another who’s espousing a quite contrary point of view. The males are Michael (Tony Cogin), the college’s stuffy chairman (with a history of breezy misogyny), and Gerald (Mark Paguio), a third-year international student and friend of Aaron. In another of Feaver’s conceptual masterstrokes, Jane Phegan plays the ferociously protective mothers of both Paige and Aaron.

Director Tessa Leong’s Griffin Theatre Company world premiere production, employing a flexible, realist set by Ella Butler, has been ravaged by both rounds of COVID-19 lockdowns before finally hitting the stage, so it deserves some latitude for the hurdles it has had to clear. Nonetheless, there’s a woodenness here, with some of the blocking as clunky as a knight’s moves in chess, and too much of the acting blighted by dangling arms or hands slicing the air – which improved in act two, so nerves may have played a part.

Paguio stood out in his ability to locate Gerald’s epicentre, while bypassing awkwardness, and when the rest of the cast lifted, he became even more assured. Havea impressed with her vibrant presence and screen-actor’s ability to communicate so much with just her eyes. “What’s the point of trying to change anything?” she asks near the end, and later provides her own answer: “Because I don’t want them to win!” Feaver’s play might be another baby-step towards their not doing so.