Music promoter Michael Chugg says he has been overwhelmed by the tributes paid to his friend and colleague Michael Gudinski, who died unexpectedly in his sleep on Monday.

As stars including Paul McCartney continued to pay tribute to the Australian music legend, who co-founded Mushroom Records, Victorian Premier Dan Andrews announced Gudinski would receive a state funeral in due course. 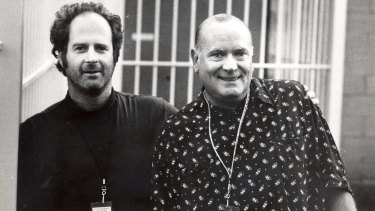 Chugg, a great friend of Gudinski for 50 years and former business partner in Frontier – the touring company that’s brought some of the world’s biggest music stars to Australia – said a state funeral was appropriate for his “one-eyed Melbourne” mate, who dedicated himself to music and had promoted the local music scene better than anybody over five decades.

Gudinski and Chugg renewed a business partnership three years ago, joining forces again after Chugg parted ways with Frontier in 1999 to form his own touring company. After two decades, it was a lifelong shared passion for music that brought the two Michaels back together. 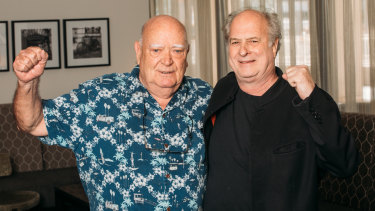 “We’ve been mates since he was 16, we had our ups and downs … I was his competitor for a few years, but that’s just the way it was,” Chugg said. “He was a great guy, we had a lot of fun together over the years.”

Chugg said the outpouring of grief from around the world over Gudinski’s death was extraordinary. “I’ve never had so many emails and texts and phone calls from overseas in my life, not in one day anyway,” he said. “For him to receive a state funeral, I think it’s wonderful.”

“It will be a celebration of his life, the details will be finalised in coming days,” Mr Andrews said. “It’s got to be COVID safe of course, but I think we’ll be able to come together in an iconic venue and we’ll be able to celebrate his life and the mark he made and the legacy he leaves.

“But it won’t be a sad occasion, it will be an occasion where we can come forward and celebrate all that he did and I think it will be a pretty good show.”

Heartfelt tributes, including from Jimmy Barnes, Kylie Minogue and Bruce Springsteen, have poured in for Gudinski since news of his passing broke on Tuesday. Sir Paul McCartney, who Gudinski brought to Australia for shows in December 2017, posted on Twitter that he was a “lovely guy” who looked after the band well during their concert tour.

“Everyone in the band and crew loved and respected him and he will be remembered with great fondness always,” Sir Paul wrote. “He was a one-off and one of Australia’s great music men. Love you Mike.”

The Premier described him as “a good friend of mine”.

“He was a great Victorian, he’ll be missed,” he said, “and I think it’s appropriate – someone so iconic – that we can come together and celebrate his life and say thank you for all the wonderful things that he did.”

Gudinski, the son of Russian-Jewish immigrants, co-founded Mushroom Records with Ray Evans in 1972. As well as a label boss, live music promoter and promoter of electronic dance music, he was a music publisher and film and television producer (Chopper, Wolf Creek, Molly).

John Watson, who worked for Gudinski in the 1990s before starting his own company, Eleven Music, said Gudinski had been busy promoting the current Midnight Oil tour and working on more new projects.

“We spoke [on Sunday] for 20 minutes, going through all the reviews of the Oils show and he was excited,” Watson said. “The tour we’re doing at the moment is really the first big tour to get back out there, borders are just open and his team has been such a big piece of all of that … he inspired such loyalty from the people who worked for him.

“He was very, very loyal to people and people were very loyal to him. He was amazing, sharp as a tack, unbelievably driven and passionate, capable of inspiring a team. He was the ultimate big picture guy.

Australian musician Paul Kelly said Gudinski was a friend to him as well as “a great inspiration and mentor to many” in the music industry.

“He lived for music and for all the people that worked in it,” Kelly said. “I didn’t think he could ever get more motivated but this past year he took it to a new level in an effort to keep Australian music alive.

“He lived and breathed for us.”